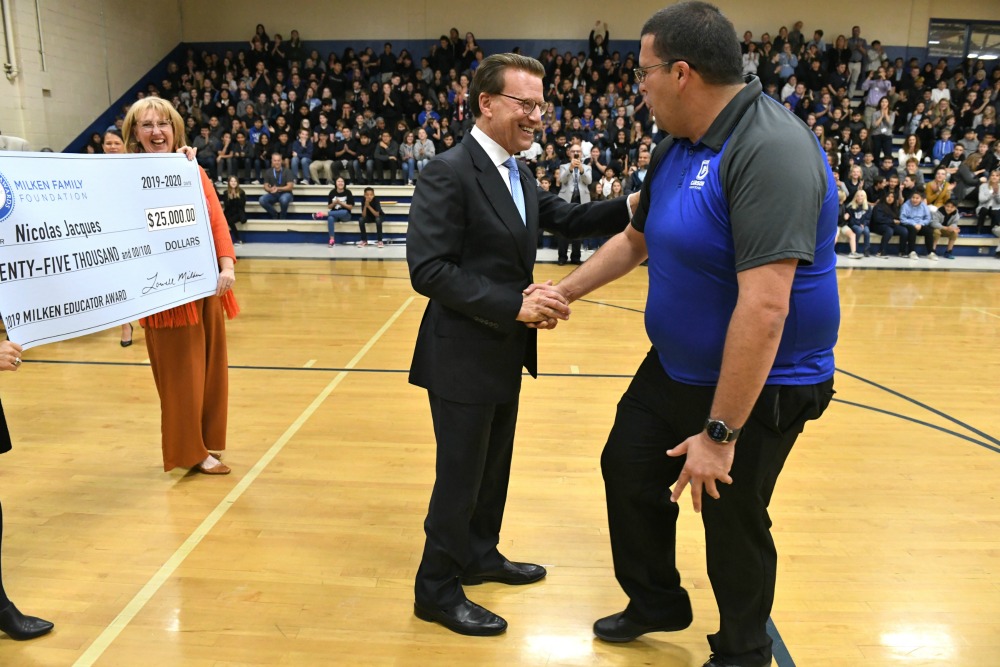 Nick Jacques (NV ’19) has doubled the size of his band program by combining caring, supportive music instruction with high expectations, forging a unique culture: “I create an environment that students want to be part of.” He won a 2019-20 Nevada Milken Educator Award at Carson Middle School in Carson City on October 24, 2019.

Milken Family Foundation: How does studying music help your students in their core academics?

Nick Jacques (NV ’19): Music teaches the organizational skills that are necessary in every other academic area. As an ensemble, all students must work together in order to ensure success. Nobody “sits on the bench”—100% of my students are engaged 100% of the time. When they learn these skills in a nurturing environment, they begin to apply them elsewhere.

One of the most rewarding moments from my Milken Award presentation was when the principal announced that my band students average significantly higher on their standardized tests than the school average. There’s the proof!

Nick: As an individual who was raised in an abusive and non-nurturing household, school was my safe place. At school I had my friends, my teachers, my hobbies and a positive environment that kept me out of the house. My best class was band because it was something I enjoyed doing, I did it well, and it gave me a reason be away from home. It was a place where I could be myself, and I flourished.

I met a teacher who would become my mentor. Chuck Wackerman, who is still teaching at the age of 89, used to share stories of his experiences with famous musicians. He showed us that those famous musicians began their journeys in school bands just like ours. That spark began my journey into music education.

In high school, I auditioned and performed with a college band. Dr. Betancourt was our teacher, and his enthusiasm, sense of humor and encouraging personality gave me an even clearer focus for my future. My high school jazz band traveled to the Reno Jazz Festival, and I found the campus that I ended up calling home for seven years. As I worked through my college classes, my drive to become a teacher continued to grow, and I knew that I had found my true calling. 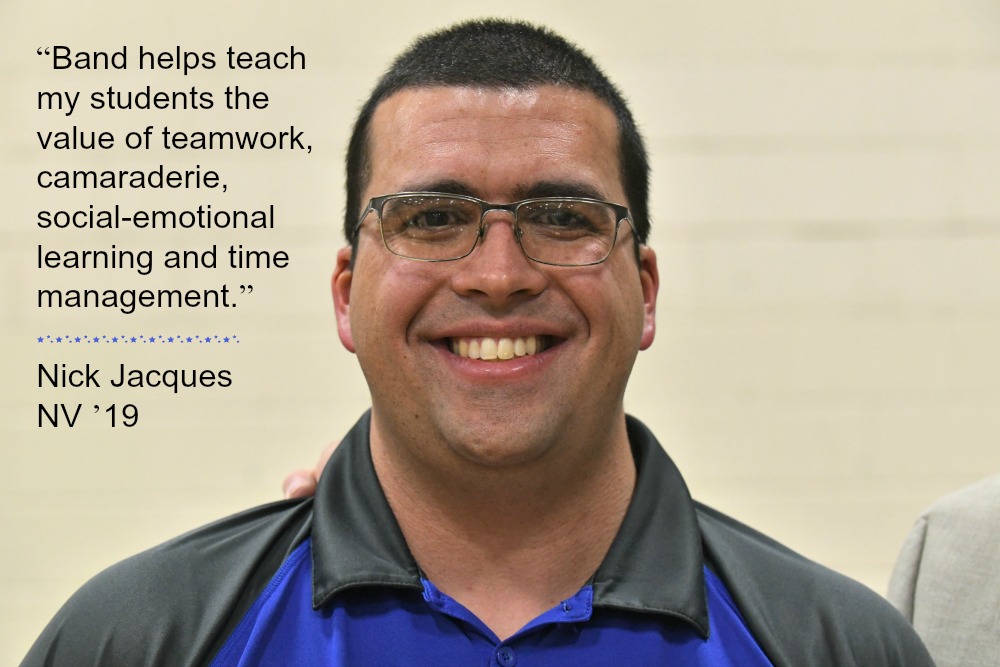 MFF: How did your first year of teaching go?

Nick: It was extremely rough. I took over a music program in a small Nevada town that was not thriving. As a motivated first year teacher with high expectations and very little experience of the realities I would face, I did not mesh well with the work ethic these students had. It created a challenging environment. After my positive experience student teaching and two years as a graduate teaching assistant at the University of Nevada, I was at a loss and considered leaving middle school behind.

Many students dropped my classes, but the ones who stayed eventually learned how to produce some pretty great music. We ended up performing well at our spring music festivals. When the school year was over, there was a 150% jump in enrollment in band for the following school year.

I was in a one-year contract position, so I ended up leaving the school before teaching those students. But I learned more about students in that short year than I learned during any other part of my education. If it hadn’t been for the school’s guidance counselor and my then-girlfriend, who was a speech pathologist, I’m not sure I would have continued teaching at the middle school level.

Nick: Middle school students have the enthusiasm, curiosity and humor that matches my personality as their teacher. This age group is an absolute delight to teach because they crave the humor and “fun factor.” They also crave and thrive on structure. Band helps teach them the value of teamwork, camaraderie, social-emotional learning and time management. The transformation that these students undergo from the day I meet them as sixth graders to the day I say goodbye to them as eighth graders is astounding. I can’t describe the feeling I get from seeing them grow so much in just three short years.

MFF: You’ve doubled the size of the band program at Carson Middle School. How?

Nick: I create an environment that students want to be part of. I can thank my music teachers for showing me how to be caring and supportive while still expecting success through hard work. Through our performances, word of mouth and stories on the news, word has spread that the Carson Middle School band program has a special culture. In fact, several parents have asked for variances so their students can attend this school and be part of the band. 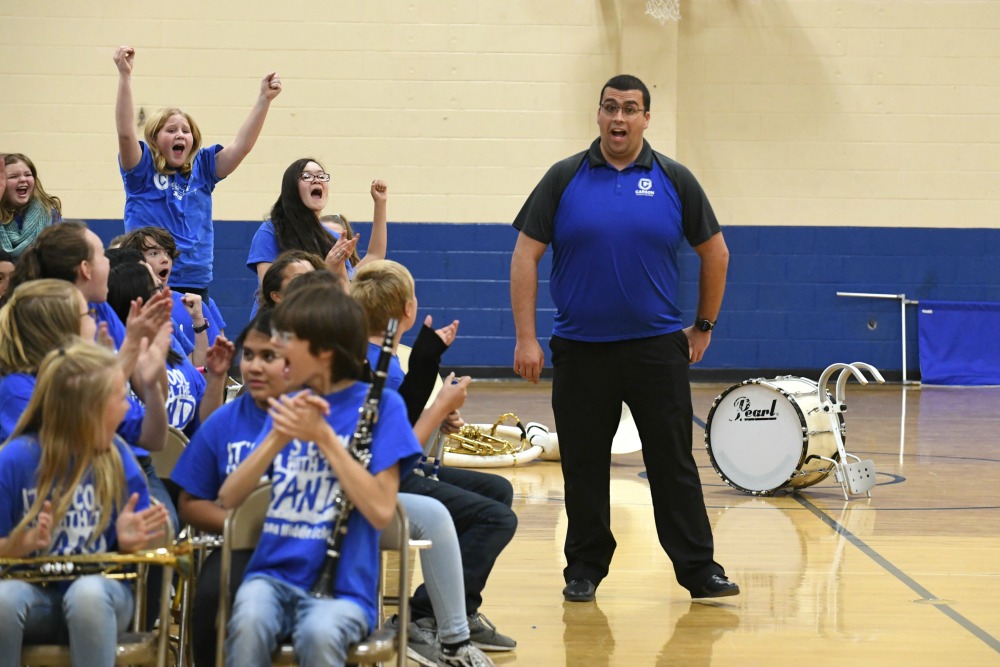 Nick: I was actually a major part of the planning of the assembly, which supposedly was a celebration of Nevada Day. A few weeks before the assembly, our principal asked me to have my band perform to kick off the assembly. We started putting together a surprise performance, which we kept secret from the rest of the school until the moment we marched in. After that, we sat in our seats and watched the presentation unfold.

As the Award was being discussed, several of my students said, “It’s definitely going to be you.” With all the talented teachers here, never in my wildest dreams did I think I’d be the recipient. As my name was announced, I couldn’t believe it. The screams of joy from my students were deafening. Looking back at the pictures, I see many students had their instruments up in the air as they were cheering.

As I was sitting next to the governor listening to the others speak, I kept thinking, “What am I going to say?” I can’t remember much of what was said by the presenters. It was a complete rush of excitement, nervousness and disbelief at the same time. 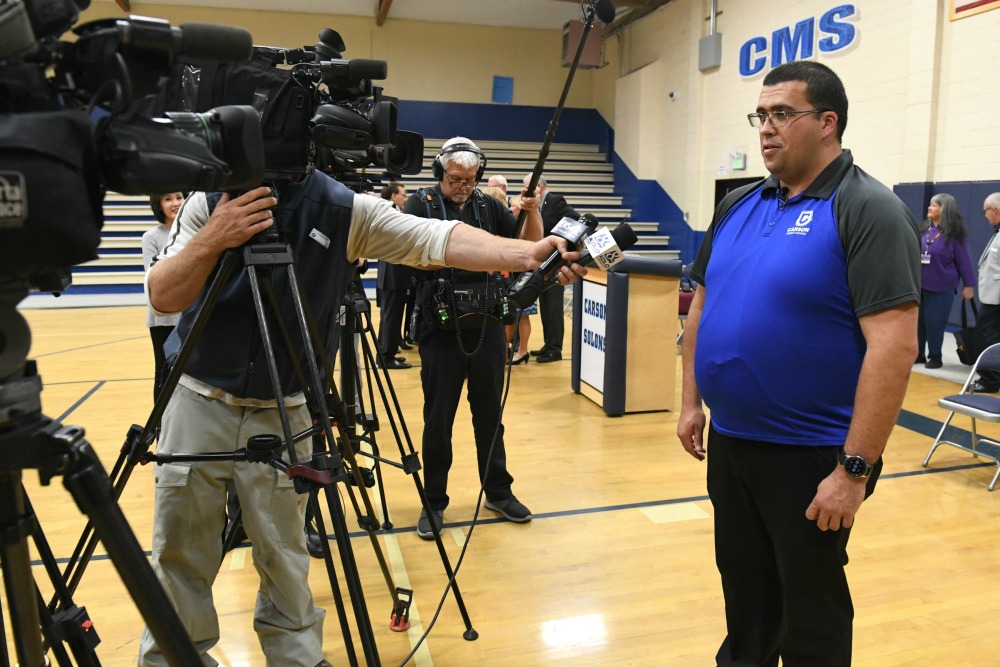 Nick: I love to travel during breaks and summers, and I’ve always wanted an RV. I will now be able to live that dream by owning a travel trailer so I can go out and recharge by exploring beautiful places in the summers. I will also use some of the money to offer a scholarship to one of my students so they can attend Lake Tahoe Music Camp this summer.

Nick: Success for me is seeing a student “get it” and looking at the excitement in their eyes at that moment. This happens every day through our rehearsals, one-on-one when they’re seeking help, and through emails after I’ve explained something that they didn’t understand in class. I am successful because of my students. Their enthusiasm feeds mine, and as a result, I’m hungry to do as much as I can for them.

MFF: What lessons do you hope your students take away from their time with you?

Nick: I push my students hard. I see more potential in them than they see in themselves most of the time. Based on my upbringing at their age, I know that several of my students feel like they won’t amount to much or they can’t make a difference in the world. I’ve shared my story with my kids as a way to show them that they can make a difference if they commit to doing something well: “If you’re persistent, you’ll get it. If you’re consistent, you’ll keep it.” 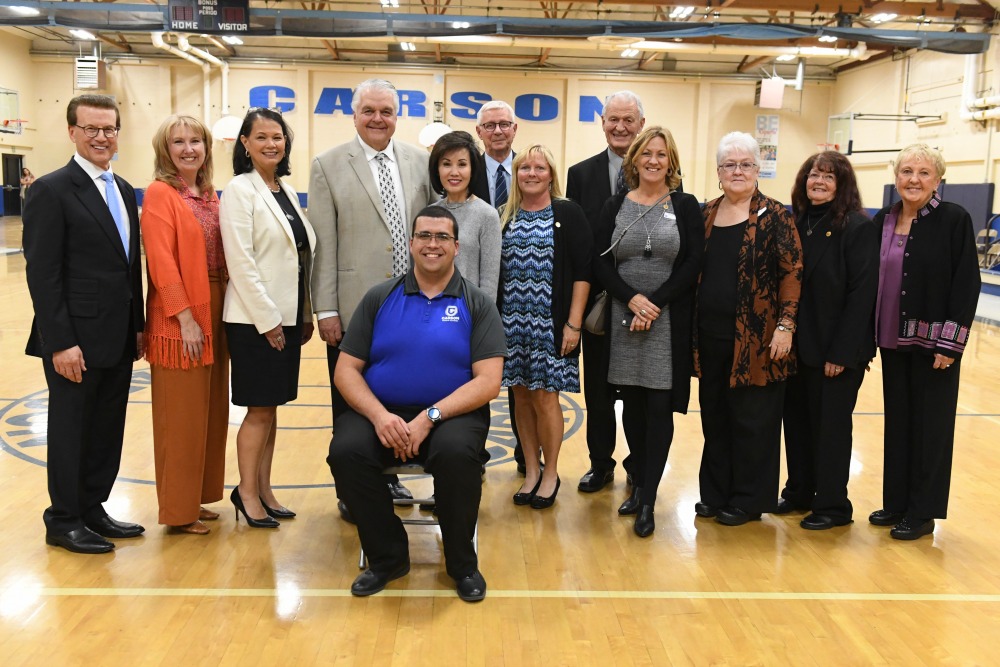 "Because AP Biology is a college-level curriculum, it prepares them for post-secondary scientific and mathematical concepts. It also gives them experience with awesome instrumentation and technology such as gel electrophoresis and bacterial transformation. There’s also a strong focus on writing. Many students find their interest in the science world through my class." — Spotlight: Raisa Eady (AL '19) 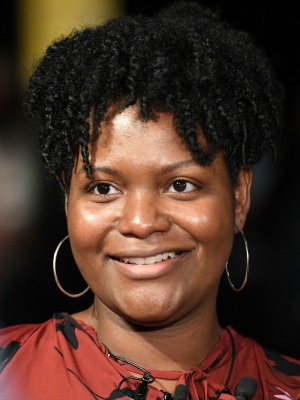