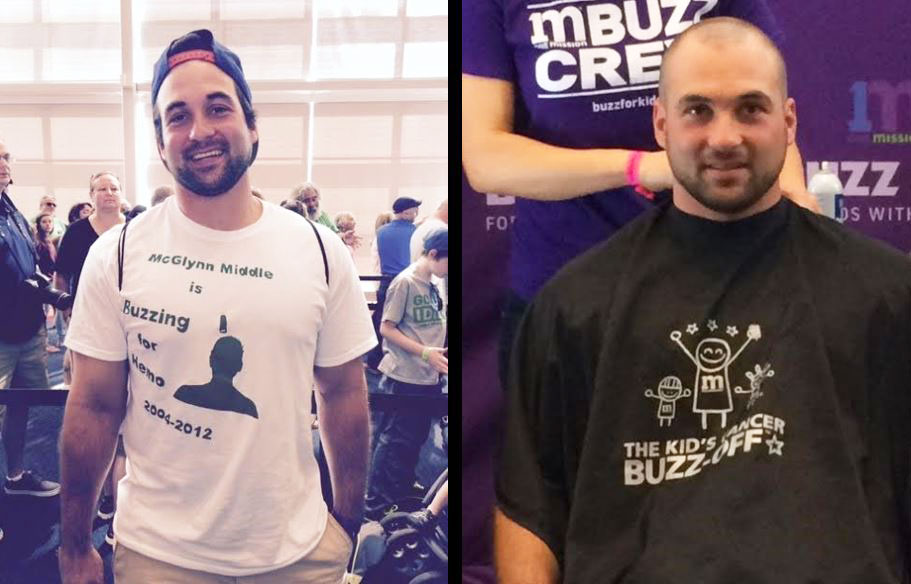 Petrelis – along with several other teachers from McGlynn middle and elementary schools—made a “bald” statement against pediatric cancer at the annual One Mission Buzz Off event at Gillette Stadium in Foxboro, Massachusetts, on June 7. The fundraising event brings people together all over the country to shave their heads in honor and support of kids with cancer. All proceeds go to support programs and services for patients and their families who are dealing with the disease.

“My hair is pretty long – it comes down to the middle of my ear. It’s the longest I’ve had it since college,” said Petrelis a few days before it was all shaved off. He teaches fifth-grade at McGlynn Elementary School in Medford, Massachusetts. 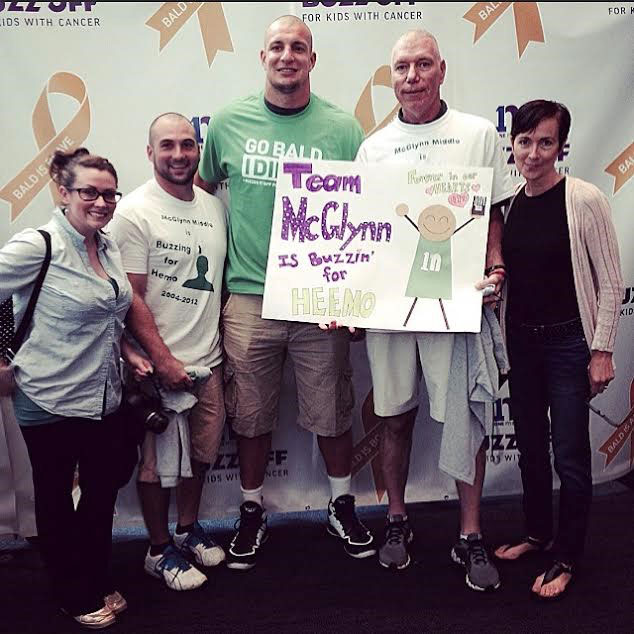 Since Team McGlynn raised more than $3,000—in fact, they raised a whopping $12,236.75!—they were invited to attend an MVP breakfast and get their photo taken with NFL star Rob Gronkowski, a tight end for the New England Patriots. The sports super star also shaved his trademark blond crewcut for the cause.

Petrelis got involved because the team captain, David Kuzmicz, a teacher at McGlynn Middle School, participated the previous year at the last minute and managed to raise just a few hundred dollars. This year, he wanted to make a much bigger impact and enlisted other teachers to champion the cause and, of course, shave their heads in solidarity.

“Children battling cancer do not have a choice to be bald and at times they feel insecure about it,” Petrelis said. “This event promotes to these children that they are not alone and we are here with them every step of the way.”

Two years ago, the devastating news that one of McGlynn’s very own students had succumbed to cancer—a third-grader named Heemo—rocked the school. Heemo would have been a 5th grader this year—possibly in Petrelis’ own class. That really struck home for Petrelis.

“To me, Heemo defines what an unsung hero is,” he said. “He was well loved by his peers, teachers and our school community.  It’s a huge motivation for me—Heemo’s passing is one of the most shocking things to happen in our school and it was really emotional for the teachers and students.”

For the past three years the school has donated all proceeds from their annual 5th grade vs. teachers basketball fundraiser—now called “Hoops for Heemo”—to Boston Children’s Hospital in loving memory of Heemo.  Funds raised by selling admission tickets, concessions and T-shirts are used to buy toys and games for the children to bring a little extra joy into their lives.

Even though he hasn’t shaved his head since high school, Petrelis said he wasn’t nervous—despite having two major events he’s attending the week after Buzz Off; He’ll be honored at the Massachusetts State House for his Milken Educator Award win and then on to Fort Scott, Kansas, where he’ll join a group of exemplary educators as a Lowell Milken Center Fellow.

“I’m not worried about how I’ll look,” he said. “I think it will be interesting to see how it grows back. I am really excited about it.”

Even though the event is over, you can still donate to help kids and families struggling with pediatric cancer.

"I want every kid I teach to have opportunity and choice, which is a phrase that I borrow from my school’s mission statement. I don’t want to define success for my students, but I would be thrilled if they all got a college education. At the bare minimum, I want them to have the education necessary to choose what they want to do in life. There’s nothing worse than feeling trapped in a job or a particular way of living. If they want to move across the country as an adult, I want them to have the opportunity to do that. If they want to switch careers after getting a few years’ experience, I want them to have the opportunity to do that. Passing standardized tests, improving on a reading assessment, mastering how to write an essay, delivering a speech—these are all stepping stones along the way to creating a life of opportunity and choice. I’m here to help them navigate." — Spotlight: Steven Gamache (LA '19) 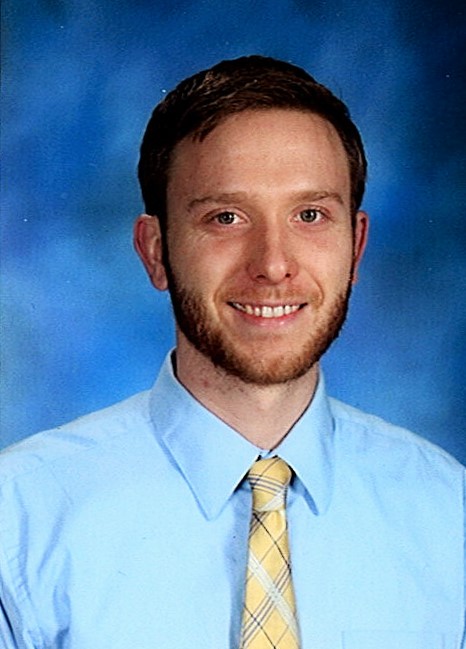