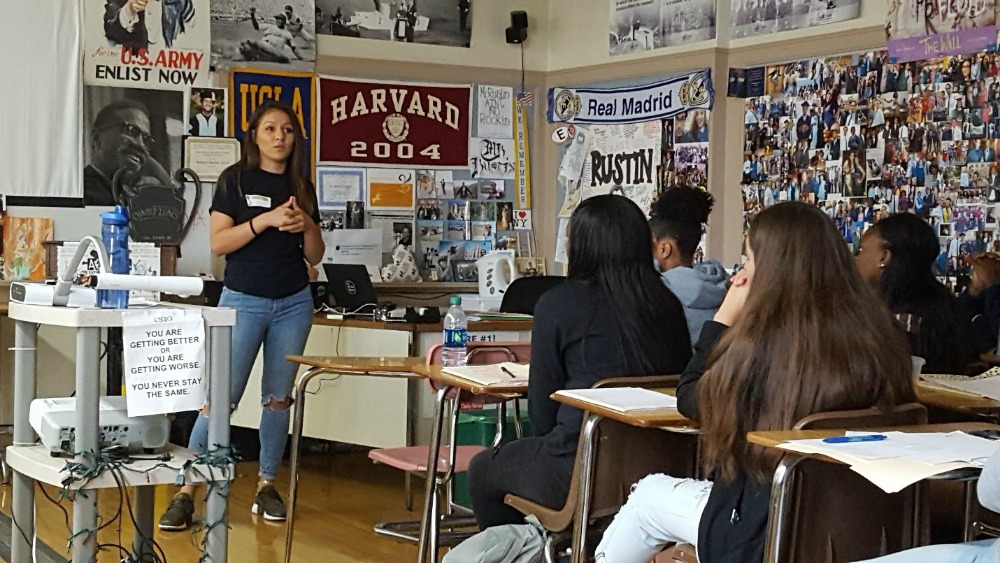 At John Muir High School in Pasadena, California, the hallways buzz between fourth and fifth periods. Teenagers rush to finish their algebra homework, chat with friends, or, if they're studying hip-hop culture with Dr. Manuel Rustin (CA '11), continue their animated class discussion of “This Is America,” the powerful song by actor and musician Donald Glover. “It relies on the shock value of violence and capitalizes on our society’s growing numbness to seeing black bodies being brutalized—it’s exploitative,” argues one student. “At least he’s shedding light on the plight of Black America to the rest of America,” another chimes in.

Dr. Rustin created “Urban Culture and Society” to help his students, who come from largely underrepresented backgrounds, relate to history. “The traditional material [on American history] isn’t designed to empower students, particularly students from marginalized communities,” says the Milken Educator. The curriculum came together as he thought about alternative lenses through which to view the U.S.’s long and racially-fraught history. Students use hip-hop music and culture as the context for examining modern American history. Unlike a traditional history course, this one doesn't look at key hip-hop dates and events; it’s more about how hip-hop, through its chronology, has reflected and spoken to the struggles of the time. “Urban Culture and Society” started as an after-school course and eventually became an elective, offered during the regular school day. 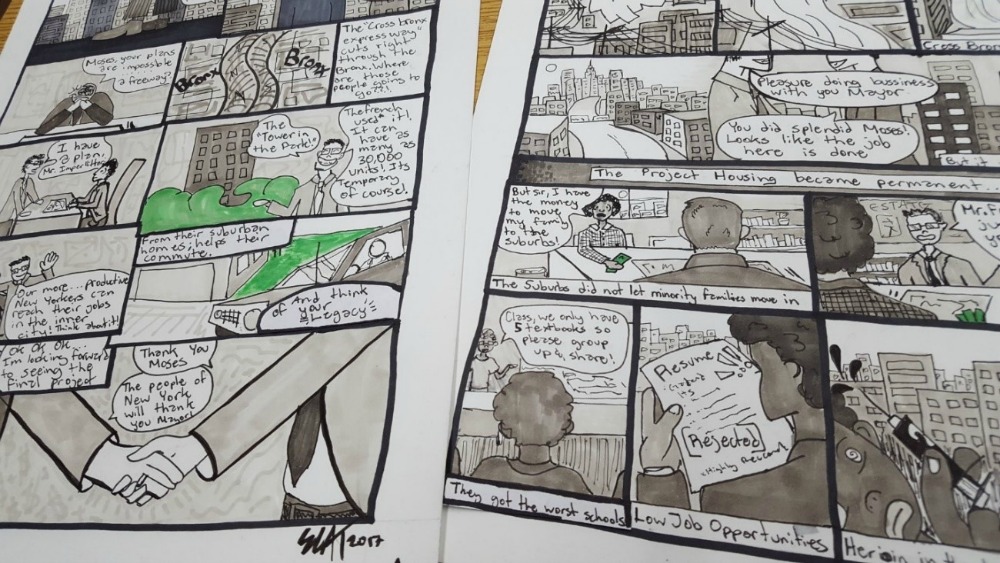 Back to the Bronx

The course begins with a snapshot of the South Bronx in the 1970’s, where a Jamaican immigrant who went by the name DJ Kool Herc laid the foundations for modern hip-hop by introducing percussive breaks, typical of Jamaican dub music, into soul and funk records played at block parties. The breaks in the music were generally too short for break dancers to show off; Kool Herc was one of the first to use turntables to extend these breaks, giving the dancers more time to flex their creativity.

Rustin works with his students to understand not just how the music came to be, but how the stories behind the music affected the artistic output. How did this Jamaican teenager end up in the Bronx? The course gets into the history of the Bronx, involving everything from urban planning, Robert Moses and the Cross-Bronx Expressway to urban decay and the “Bronx is burning” era, when slumlords burned down their own buildings for profit. Rustin uses all the history from the post-Civil Rights era to examine how hip-hop became the voice for marginalized young people, first in the Bronx and then around the world.

The course engages his students more than their regular American history course because it centers around his students’ lived experiences, says Rustin. A couple of months ago, during a lively debate, Rustin asked students to raise their hands if they had been personally affected by gun violence, a frequent hip-hop topic. Every single hand went up.

“We don’t want to avoid the tough topics because these are experiences that the students are living,” Rustin explains. “We debate whether or not an artist is promoting violence or expressing what they’ve experienced themselves, and there’s no clear answer in that. So it’s a discussion students love to have. For me, as a teacher, it helps that I can use that high-interest discussion to reinforce the critical thinking skills we need students to develop.”

When it comes to misogyny, another common hip-hop theme, the first step is teaching students what it is and how to spot it—“not just in music, but in their day-to-day lives,” says Rustin. “Once we build up our capacity for identifying it, then it’s looking at the music and really challenging or critiquing what the artists are saying.” 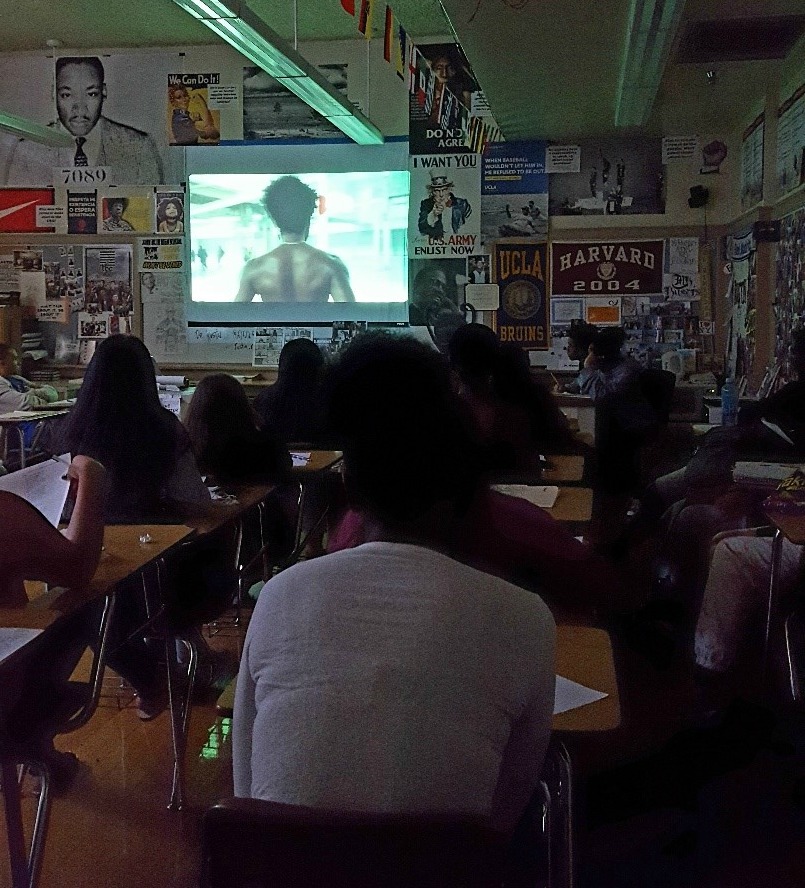 In order to align the course to Common Core standards, Rustin includes college-level reading, writing and thinking skills. There's no high school level textbook about hip-hop, so he pulls resources from different college texts. The standards prioritize evidence, argumentation, and research, so Rustin challenges his class to use the lyrics of hip-hop artists as their primary source to draw conclusions about what the struggle looked like in different neighborhoods and communities at different times in America’s recent history. When students engage in lively debate over whether an artist “meant” what he or she said, Rustin encourages them to back up their theses with evidence from the texts.

The critical thinking skills required of the course help the students far beyond the high school classroom. Rustin wants his students to take away an understanding of their place in the world and how to move through it ethically and curiously, constantly challenging the assumptions around them. Students often come back after graduation, telling current students that the way they engage with the material in Rustin's class gave them a leg up when they started taking college courses. “It pays dividends for my students to be able to see themselves in the material,” says Rustin. “It’s not about the music—it’s about how the music represents their journey through modern America.”

“It is the educated who will be able to adjust to our rapidly changing world. We need to teach them to be question askers, analyzer, information seekers and problem solvers rather than stagnant vaults of information. Learning is a lifelong journey that allows one to be an active and productive participant in the world they live in.” 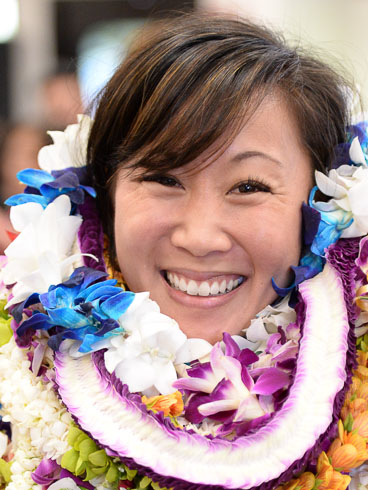