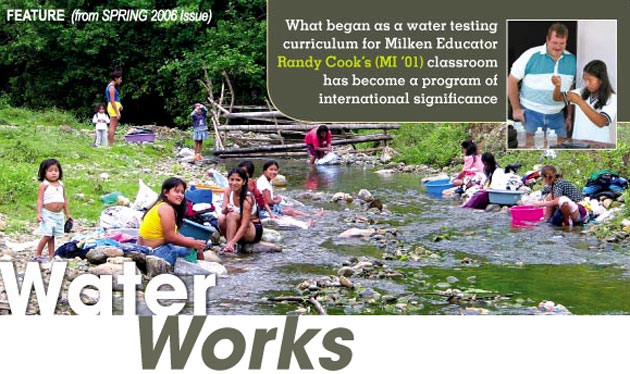 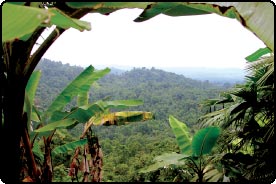 Like many communities, this one is centered around a water source—the Valdivia River, which the area's residents rely upon for drinking, cooking, bathing, washing and irrigating crops. Naturally, the cleanliness of this river is essential to the community, and yet for many years the villagers were unknowingly polluting the river through their own farming practices. Not only were they placing fertilizer too close to the banks, but in an effort to gain more fertile farmland, they were clearing and steadily destroying one of their most precious resources—thousands of acres of a rare type of rainforest called fog or cloud forest.

Trees in this type of forest capture moisture in the form of fog, which then becomes part of the river's water supply. Cutting down trees means less fog, which means less water in the river, and more of it contaminated by the detritus of deforestation.

It's a funny thing about water: it's visibly transparent, and yet it can hide a whole host of harmful substances. Too often these unseen dangers only become apparent when someone becomes ill, and that's precisely what was happening in Loma Alta. Of course, such illnesses can be prevented through proper water testing and monitoring, but that requires technology and education—two resources not readily accessible in this otherwise resource-rich community. 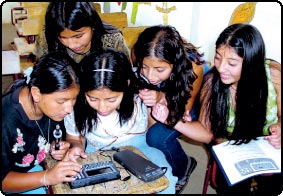 In the summer of 2002, Randy was approached by a New York-based nonprofit organization called People Allied for Nature (PAN), which had been working for nearly a decade to preserve the rainforest in the Loma Alta area. The president of PAN, Claude Nathan, had secured funding for eight full-time teachers to educate the children in that region about water testing, conservation and protection of watersheds.

What he needed was a curriculum. Randy Cook had just what he was looking for.

Howard City, Michigan, is worlds away from Loma Alta, and yet the two communities share some common characteristics. They are both small rural villages, and they both depend upon the cleanliness of nearby water sources. For the people of Howard City, it's Tamarack Creek, where residents often go to swim and fish, and where new homes are being built and developed right along the creekbed.

In the fall of 2001, Randy's students at Tri County High School began a school project to test the water in Tamarack Creek, as well as the dammed waters of the Little Muskegon River and nearby Indian and Winfield Lakes. Their activity was part of a new curriculum Randy had written involving the use of ion-specific probes and graphing calculators, technology that Randy had discovered the previous summer while writing lab materials for a college environmental course. 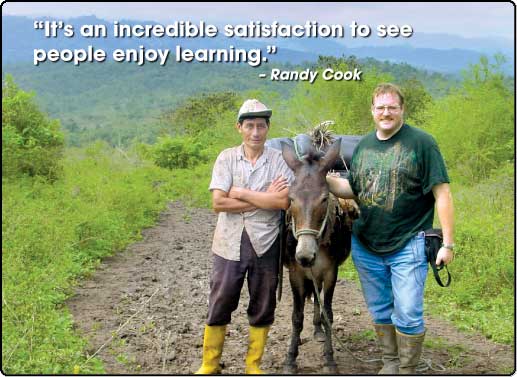 Aligning his curriculum with state and national standards for science and technology, Randy developed materials that were easy for students to follow, with step-by-step instructions and illustrations. These materials helped students focus their energies on the task at hand: testing the water in Tamarack Creek.

What they found, fortunately, was that the water in the creek was relatively clean. There was a noticeable presence of nitrates, sulfates, and ammonium ions—an indication of fertilizer runoff—but none of these were in remotely harmful amounts.

The more important discovery that Randy's students made was that they found themselves enjoying science.

"It's an incredible satisfaction to see people enjoy learning," said Randy. "This project makes learning fun: you're out of the classroom, out on a lake or a stream on a beautiful fall day. I have students come back and tell me that they might not remember a thing they've done in my chemistry class, but they remember the water testing, and how much they enjoyed learning and how much they still use what they learned." 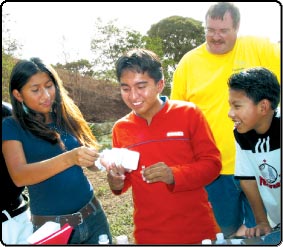 In 2002, a nonprofit organization called Michigan Lake and Stream Associations, Inc. (ML&SA) heard about Randy's water testing curriculum. They contacted him to see how they might use his valuable resource for an educational program that could be implemented throughout Michigan.

With their help, Randy Cook's one-class curriculum became a statewide program that brought schools and communities together to promote water conservation and the wise use of Michigan's water resources.

In the first year, 10 schools joined Randy's program, titled "Watershed Monitoring Lakes & Streams." Nine more schools have joined since then, for a total of 20 across the state.

The Minnesota-based Irwin Andrew Porter Foundation contributed enough grant money to the program for all schools interested in implementing it to purchase the required equipment. Soon the foundation contributed something else — a connection — that took Randy Cook 3,000 miles away to a whole other world.

Since the early 1990s, People Allied for Nature had been working with the people of Loma Alta to preserve the nearby rainforest, a significant percentage of which is owned by the community. For this effort to succeed, PAN realized that the villagers and their children needed to be educated in environmental science—a goal that was easier said than done.

Few children in the region advance in their education beyond the sixth grade. Those who do must pay for their own tuition and learning materials, an expense that families there can rarely afford. What's more, the government pays for only one teacher to instruct all 300 children in the village. 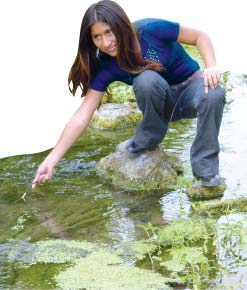 People Allied for Nature wanted to improve this situation by providing teachers and resources for the villagers through grants from, among other organizations, the Irwin Andrew Porter Foundation. This was the same foundation that had awarded a significant grant to Randy Cook's watershed monitoring project in Michigan. Seeing that PAN needed an effective environmental science curriculum and that Randy Cook had one, the foundation introduced the two parties to each other.

At PAN's request, Randy wrote an elementary curriculum that was very simple and did not require the use of technology. This curriculum was translated into Spanish and used by students in the Loma Alta area. Pleased with his work, PAN asked Randy if he had a similar curriculum for high school students.

When he presented PAN with the curriculum that he and the ML&SA had been implementing throughout Michigan, PAN President Nathan made Randy an extraordinary offer: he asked Randy to accompany him to Ecuador and teach the children of Loma Alta in person how to use the probes and graphing calculators to test their water.

Except for one summer in Norway as a high school exchange student, Randy had never traveled outside the United States. But by the summer of 2003, he found himself flying into Guayaquil, Ecuador's largest city. From there it was three hours by bus to the coastal town of Manglaralto, and another hour's drive into the mountains to Loma Alta. 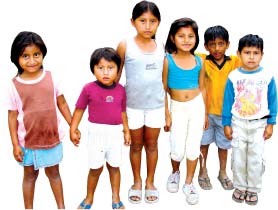 What he found when he got there was a group of students eager to learn. None of them had ever seen a calculator before. For them, Randy's visit was not only an initiation into the subject of water testing, but an introduction to the kind of technology that many of us take for granted.

Eighteen children attended Randy's first training session. The session lasted seven-and-a-half hours, without a break. Not one of the 18 students ever got up to leave.

"I still find it rather amazing that they were so eager to find out what was going on, they sat there for that long," said Randy.

That first trip to Loma Alta lasted a little over a week and a half. During that time, Randy had a chance to hike several kilometers to the nearby rainforest, which he described as "absolutely breathtaking." Since then, he has gone back every summer, usually with his wife, and he has kept the students' interest alive by bringing them new tests they can perform or new equipment they can use.

On his first return visit to Loma Alta, Randy noticed a significant change. When the children went to their testing sites along the Valdivia River, they found some debris that had been discarded there. In previous years, the students would never have given it a second thought, but now they were visibly upset. They had developed a sense of pride in the cleanliness of the river. They cleared the debris and began their testing.

The children weren't the only ones learning about the importance of water quality testing. The adults were at first skeptical when Randy told them he could tell exactly when they had started fertilizing their summer crops. They didn't see how this was possible, but when he analyzed the data collected by the children in the village and saw a spike in nitrates, ammonium and phosphates—all ingredients found in fertilizer—Randy was able to guess the date precisely. They were impressed and wanted to know more. 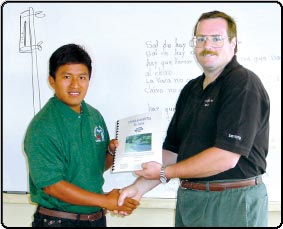 Teaching the children and community of Loma Alta how to monitor their water has had an impact not only on the people, but on the environment as well. Farmers now leave a buffer zone between the riverbed and the fertilizer they plant for their crops, which has made the Valdivia River cleaner and safer for villagers. And through the work that PAN and Randy Cook have done in the area, in partnership with an environmental organization known as Earth Force, 7,500 acres of rainforest are now being preserved and protected in its pristine state: no hunting, fishing or cutting allowed.

Recently, certain developments have given Randy a chance to visit Loma Alta more frequently. In November 2005, the children of Loma Alta were invited by a government agency in Guayaquil to perform water testing in the city, in the presence of newspaper reporters and TV camera crews. As their teacher, Randy accompanied the children on what was for many of them their first time in the city.

In January 2006, Randy returned to Loma Alta for the dedication and grand opening of a new library and media center. Named after Claude Nathan, the president of PAN, the center includes books, a donated computer, stereo equipment, a TV and a DVD player—a rare sight for such a remote rural community.

Randy plans to continue his regular visits to Loma Alta, especially now that two-thirds of his original class is graduating. New students must be trained, but Randy's plan is to give more of the responsibility for training to the students.

"The whole purpose of education is to have students learn something and be able to do it themselves and teach it to others," said Randy. "If I can do that, I'd be extremely happy."

Education is like a river, flowing from a source and splitting off into other rivers, streams and tributaries. And just as the waters of the Valdivia River are now clearer, devoid of the pollutants that for years had muddied its current, the knowledge that Randy Cook has imparted to people both in Michigan and Ecuador has led to a clearer understanding of the importance of water testing and the value of effective teaching.

"A lot of these kids will never leave the community," said Mr. Cook of his Loma Alta students. "But now they're environmentally aware. They've done the testing. And they're tomorrow's leaders. So they will continue to protect the reserve because they're very concerned about the environment.

And they're very proud of their forest."

“If we are to achieve the promise of education for all young people, we must focus reform efforts on the predominant human capital component in the system--talented teachers--people who are the heart and soul of education, the inspiration for the young people they teach.” 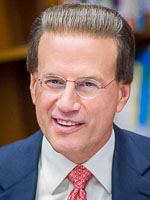