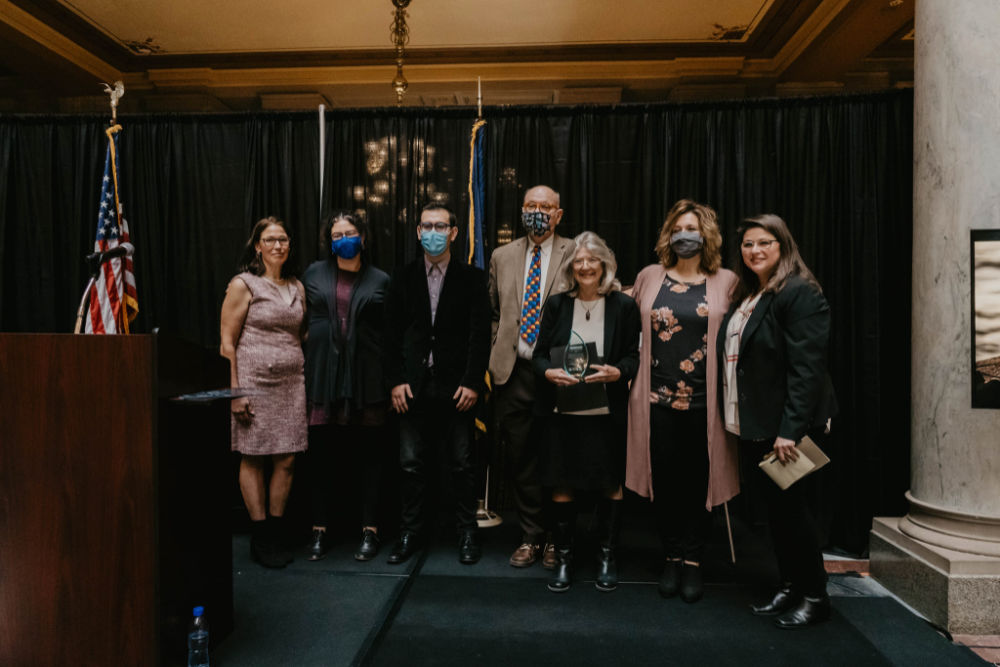 On November 9, 2021, Sarah Powley (IN ’93) accepted the Never Again Ambassador Award at the Indianapolis Capitol on behalf of the Greater Lafayette Holocaust Remembrance Committee (GLHRC), which she chairs. The timing of the presentation was no accident, marking 1938’s “Kristallnacht,” the horrific “Night of Broken Glass” when the Nazis ransacked Jewish communities in Germany and Austria. The Indianapolis Jewish Relations Council and the Indiana Civil Rights Commission jointly presented the honor for GLHRC’s 40 years of work to “create meaningful spaces for both the memories and lessons of the Holocaust to never be forgotten, so that such atrocities never happen again.”

While Powley described the remarkable progress that has been made to promote Holocaust education for Hoosiers, she was quick to note that the work goes on and must continue. “Our hope,” Powley said, “is that this award will inspire a new generation of volunteers to join us in fighting against prejudice, discrimination and hate.”

When lives are shattered, how can we begin to heal as a community? We talked with Powley about her longtime dedication to deepening Holocaust education and the resources she recommends to strengthen our resolve to eradicate genocide of all forms.

How did you become involved in Holocaust education?

I have to thank Dr. Jane Foley (IN ’94) and the Milken Family Foundation! Back in 2002, Jane sent me a copy of The Children of Willesden Lane by Mona Golabek. The book is a memoir that Mona wrote about her mother, Lisa Jura, who escaped from Austria on the Kindertransport in 1938, lived in a youth hostel in London throughout the war years, and triumphed over adversity through the gift of music. Jane asked me and other Milken Educators to review the book for possible use in the classroom. I read it myself (gulped it down), then gave it to several of my students. They were more than enthusiastic, responding deeply to the message of determination, resilience and the power of music to lift one up in a time of trouble. The endorsement of Milken Educators led to our reviewing the teacher resources created by Facing History and Ourselves and benefiting from a Facing History workshop. I began reading this inspiring memoir with all of my ninth graders the next year, then conducted workshops about the book with a colleague from the Indiana Department of Education. I even had the opportunity to present with Mona Golabek at a National Council of Teachers of English (NCTE) Conference in San Francisco.

I began delving deeper into the history of the Holocaust. I read more, both memoir and non-fiction. I learned about more recent genocides, and in 2006 I traveled to Rwanda to study the 1994 genocide. When I returned, my students and I gave a presentation to teachers at the Greater Lafayette Holocaust Remembrance Conference about the Stages of Genocide.

And of course, I became a member of the Greater Lafayette Holocaust Remembrance Committee.

At Jane’s encouragement, I applied to become a Fellow at the Lowell Milken Center for Unsung Heroes in 2009. What an amazing experience! I spent the week discerning and organizing a project for my students. I had written a biography of Rabbi Gedalyah Engel, the founder and force behind the GLHRC, and was determined to use his example as a model for what I’d ask my students to do: identify a champion in our community and write about that person’s advocacy for a cause. Ultimately, this changed their perception of what makes a hero. Their work was published each year, and now three volumes of “Unsung Heroes in Our Community” reside in the public libraries in our county and in the Indiana Historical Society collection in Indianapolis.

Writing a biography of Rabbi Engel and my experience at the Lowell Milken Center led me deeper into the purpose of the GLHRC: Holocaust education in the classroom and the community.

In 2012, I became the chair of the GLHRC and have been leading an amazing group of dedicated volunteers ever since to plan and carry out an annual conference, held on the campus of Purdue University, to consider the Holocaust and the lessons we should have learned from that horrific time in history. The award we just received—the Never Again Ambassador Award—from the Jewish Community Relations Council in Indianapolis and the Indiana Civil Rights Commission is a tribute to the commitment of scores of volunteers who have been devoted to this cause for 40 years. They are unsung heroes in our community! 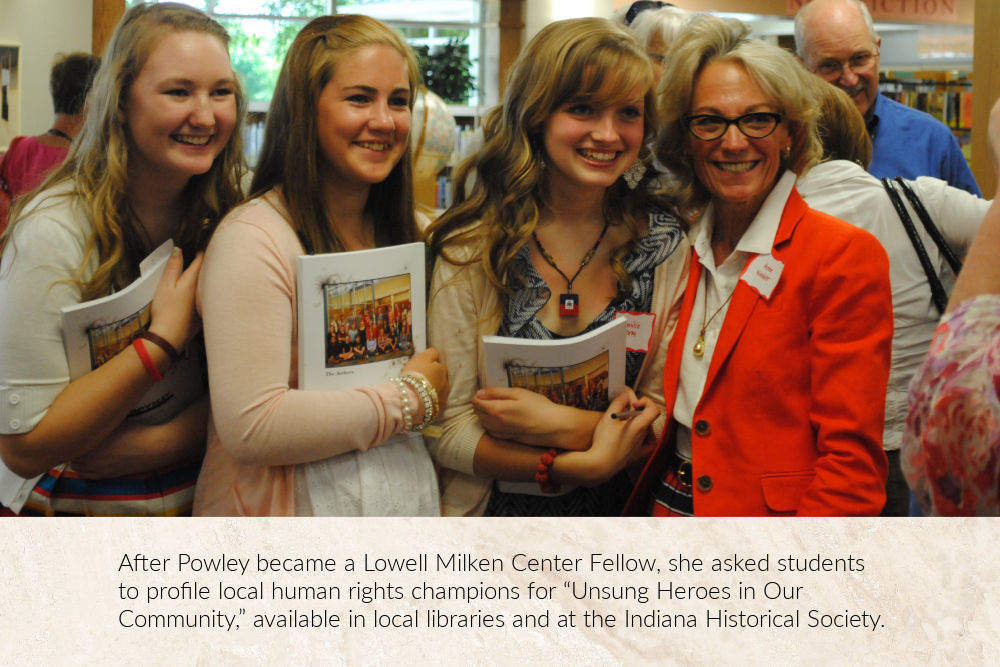 Why is the GLHRC’s mission to combat prejudice, hatred and discrimination important right now?

The bulk of the work for GLHRC occurs during the school year as we fundraise, plan for, publicize and put on the themed, multiday conference, which usually occurs in April. During the past year, because of COVID-19, we moved to an online format and have been presenting Zoom events twice a year, in late fall and early spring.

Clearly, the world hasn’t learned the lessons of the Holocaust. Prejudice, discrimination and hate are still with us. When we study the Holocaust, we not only remember and honor those who perished and those who survived, but we also learn how the Holocaust happened and how it could—and still does—happen again. As educators, we must teach our children to go into the world with the compassion, knowledge and will to fight against these dark forces in all of their manifestations.

To that end, the GLHRC does not only advocate for the inclusion of education about the Holocaust in the regular curriculum. In partnership with the Ackerman Center for Democratic Citizenship in the College of Education at Purdue University, we offer free, annual workshops open to teachers across the state. Our presenters have sometimes been local educators, but sometimes come from afar. Norm Conard (KS ’92), the executive director of the Lowell Milken Center, and Jack Mayer, the author of “Life in a Jar: The Irena Sendler Project,” conducted the workshop in 2015. Facing History and other organizations have conducted workshops other years. This past year, we hosted an online workshop by Echoes and Reflections.

In addition, in 2013, the GLHRC began offering grants to local educators to fund classroom projects or professional development for themselves. Since then, we have awarded over $17,000 to 21 teachers in our community. Their projects have included field trips to Holocaust and civil rights museums, books for classroom libraries and after-school book clubs, and an exploration of world religions through visits to a local church, mosque, and synagogue for seventh grade social studies students. This year, we funded a choir teacher whose students will perform music from the Holocaust at a concert in the spring. Our teachers have traveled to concentration camps Auschwitz and Theresienstadt, and to Washington, D.C., to participate in the Belfer Conference at the United States Holocaust Memorial Museum (USHMM). One of those teachers is now a USHMM Fellow and a member of the GLHRC. She created and now teaches an elective course on genocide at my high school. 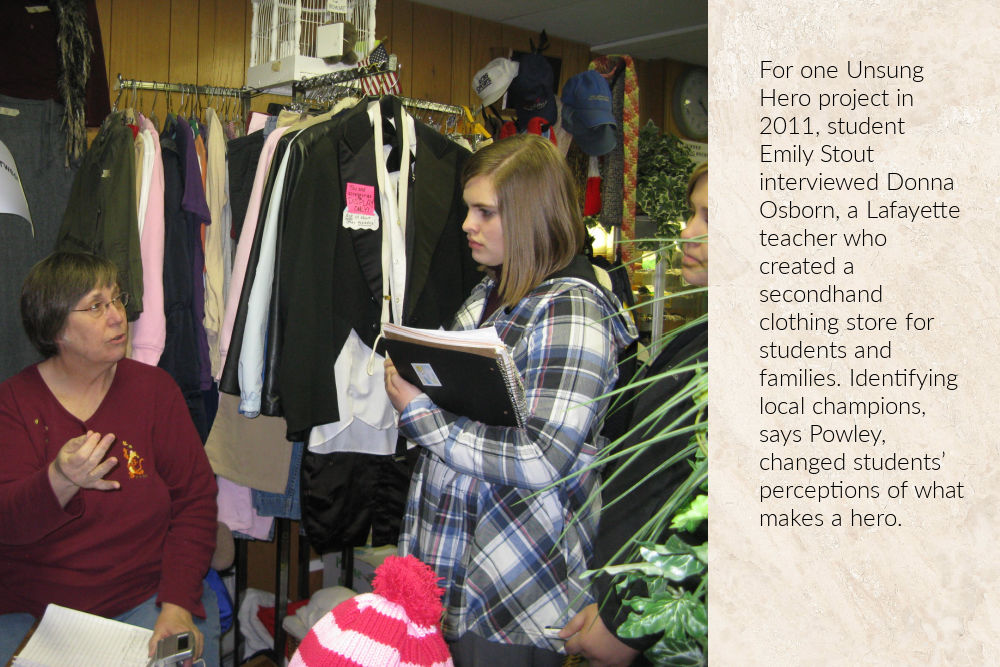 How will this award enhance and support your work moving forward?

The news of this award came as a total surprise. I opened my email one morning a few weeks ago and just sat there for a few minutes taking it in. We are all humbled and amazed by the award and grateful to be recognized for the importance of this work and the dedication to it of so many people for so long. This award is for them—the volunteers—for 40 years of hard, important work. It’s not easy to look injustice and atrocity in the face day after day, year after year. It takes determination not to look away and absolute commitment to the belief that we can create a better world by remembering the past and educating for the future.

We hope this award will increase awareness of the GLHRC and its work and that the award will inspire a new generation of local volunteers to join in our efforts. Already there is talk among the teachers at the award ceremony of taking this work to the state level, of collaboration among various groups in the state who are engaged in Holocaust education. 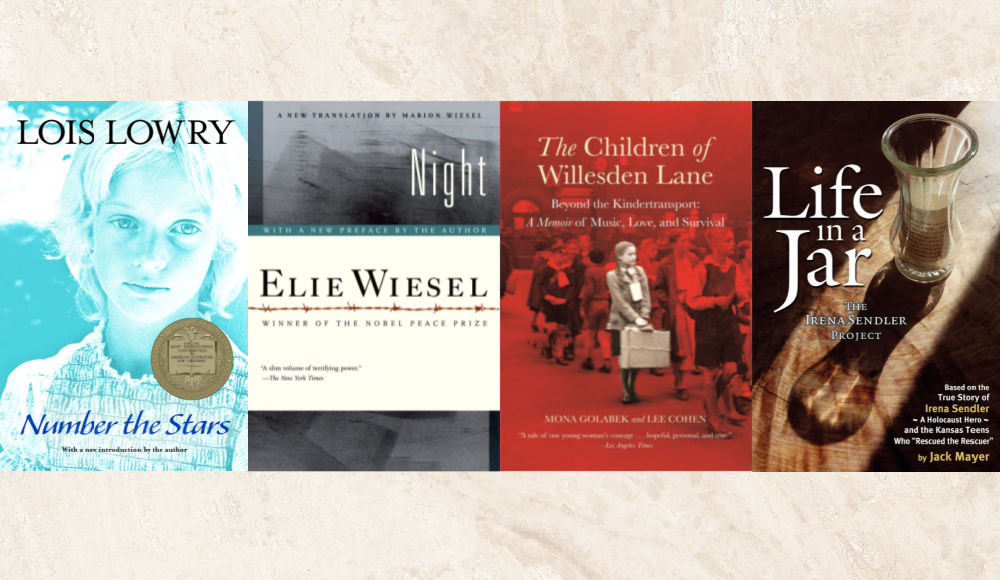 What key resources or projects would you recommend to educators?

The sheer volume of information and the number of high-quality resources available to teachers can be overwhelming—even for someone who already is well-versed in Holocaust studies.

Genocide is not something from the distant past. Prejudice is not new. Discrimination is still with us. Hate dominates the headlines. Genocide itself starts with prejudice. We see the seeds of it in classroom bullying, in ethnic “jokes” told in the lunchroom, in taunts in gym class. Every educator is on the alert for these early manifestations of othering. We are already alert to the corrosive effect of their words and actions on the perpetrators and the dehumanizing impact of their thoughtlessness on the victims. All of us must continue the struggle against the behaviors that occur right under our noses. Holocaust work is work that every educator can do.

"One of the key factors in my decision to be an educator was the influence of family members. My family has many educators and I was taught early in life that education is the foundation for success. My mother was a teacher and I saw former students come to her as adults to express their gratitude and share the positive influence she had on them. I wanted to make that same impact." 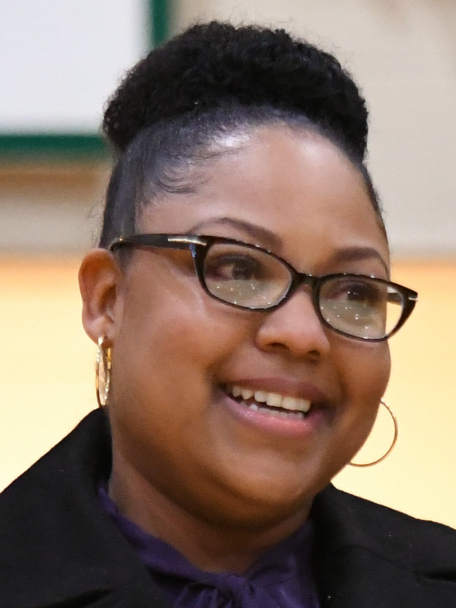