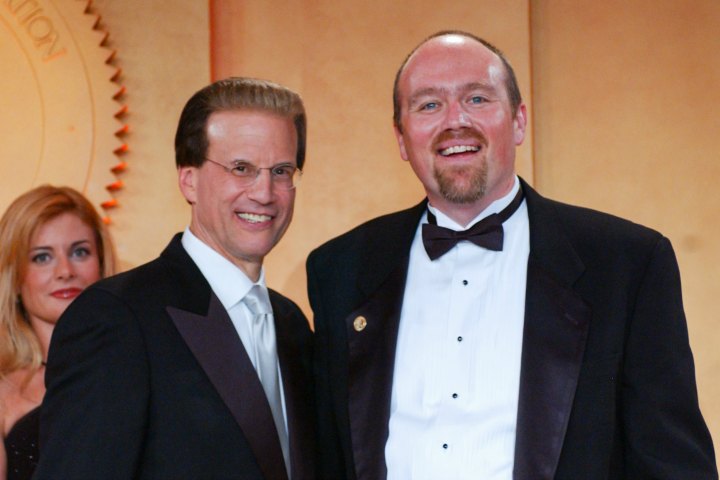 Joe Stephens teaches AP English at Parkersburg High School in West Virginia and is the author of several well-reviewed mystery novels featuring Harry and Dee Shalan, husband-and-wife private detectives. During a recent 30-day blogging challenge, Stephens wrote about his proudest moment: the day in 2005 when he was surprised with a West Virginia Milken Educator Award. The article below is reprinted with permission from My Train of Thought, Stephens's blog. Above, Stephens with Lowell Milken, chairman and co-founder of the Milken Family Foundation.

It's day 10 of my 30-day [blogging challenge] already. A third of the way to the finish line. Today's topic is my proudest moment. As it was with an earlier post, I struggle to talk on the subject of things of which I'm proud, at least about myself. But when I saw this prompt, two events popped into my head. That I could so easily pinpoint proud moments probably means I'm a prideful person. I hope not. At any rate, here we go. As I said, two moments popped into my head, one as a writer and one as a teacher. I'm going to talk about the teaching one.

It was the fall of 2005. Three friends and colleagues and I were in the eastern panhandle of West Virginia, having just finished doing technology training for teachers the night before. We had to get up and be back to school that afternoon for an assembly with someone from the West Virginia Department of Education and then parent-teacher conferences. Normally the late sleeper in the group, my best friend Dan Daniel suggested we get up unusually early and hit the road. It seemed a bit odd, but he claimed he had papers to grade and didn't want to waste time. So off we went, coffee in hand.

About halfway between Martinsburg and Parkersburg, there's a lovely store that sells produce and local products. It was fall in apple country, so we were hoping to stop and pick some up. But just as we were about to pull off the road, Dan, who was driving the lead vehicle, announced that the place looked closed and stayed on the interstate. I could see that the parking lot was partially filled, but it was too late to argue. Something was odd, but I had no idea yet just what was up. 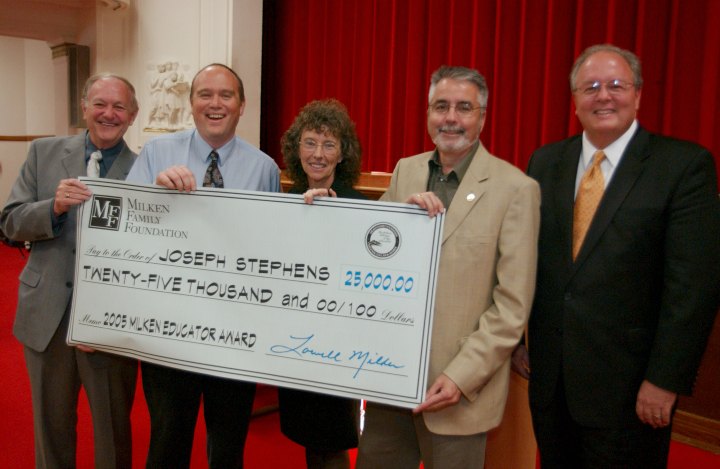 We got to school just in time for an assembly of the entire staff in the auditorium. But it wasn't just staff. There were people there from the local newspaper and television station, as well as several folks in suits. One I recognized as Dr. [Steven L.] Paine, our state superintendent of schools [ed: Paine had previously won a Milken Award in 1995]. Mr. [Ralph] Board, our principal at the time, introduced Dr. Paine, who came to the microphone and announced that the reason we were given for meeting was bogus. Instead of talking about new curriculum, he was there to introduce a lady named Dr. Jane Foley, who was from the Milken Family Foundation [now senior vice president of the Milken Educator Awards].

As soon as he said that, I knew what was going to happen. Dan had won the Milken Educator Award 15 years before [in 1991]. No other teacher from Wood County ever had. But someone else from Parkersburg High School was about to. Dr. Foley described the award as "the Academy Awards for teachers" and explained that only two teachers per state received it each year as a way to acknowledge a teacher who is student-centered and innovative and who takes a leadership role outside the classroom. And the best part is it's a total surprise. There's no application. They find you. The candidate is completely clueless about it until his or her name is called. As she talked, I chattered in Dan's ear about who he thought it might be. Could it be Jim Dennis? Woody Wilson? Sue Steinbeck? So many amazing teachers deserved it. But Dan, normally as much of a chatterbox as I, was just a sphinx.

And then she said it. "The recipient of the Milken Educator Award from West Virginia is Mr. Joseph Stephens." I was speechless. I looked at Dan and uttered these immortal words: "I'm glad I wore a tie." A lot of the next hour is kind of a blur. I was interviewed by the reporters and shook more hands than a politician at a rally. Then I called my wife and family and told them. Every time I told someone, I had to explain what it was. Only teachers know about the Milken Award. When I said they were going to hand me a $25,000 check, though — that they understood.

It wasn't about the money. It was the recognition. And I don't mean recognition as in notoriety, but as in recognition that what I was doing inside and out of the classroom, for students and colleagues, was worthy. It was effective. And to be put on the same level with my friend Dan is way more humbling than something of which I'm proud. If I am a good teacher, it's because of Dan and his wife Becky, who were my mentors and will always be my yardstick when it comes to quality teaching. So if someone tells me I measure up to them, I guess I'm okay with feeling a little proud.

"It's important that teachers want to do better and be better. If we demand that of our students, we have to model that ourselves. It's very important to recognize people who are continually growing, continually changing, and continually giving everything they have." 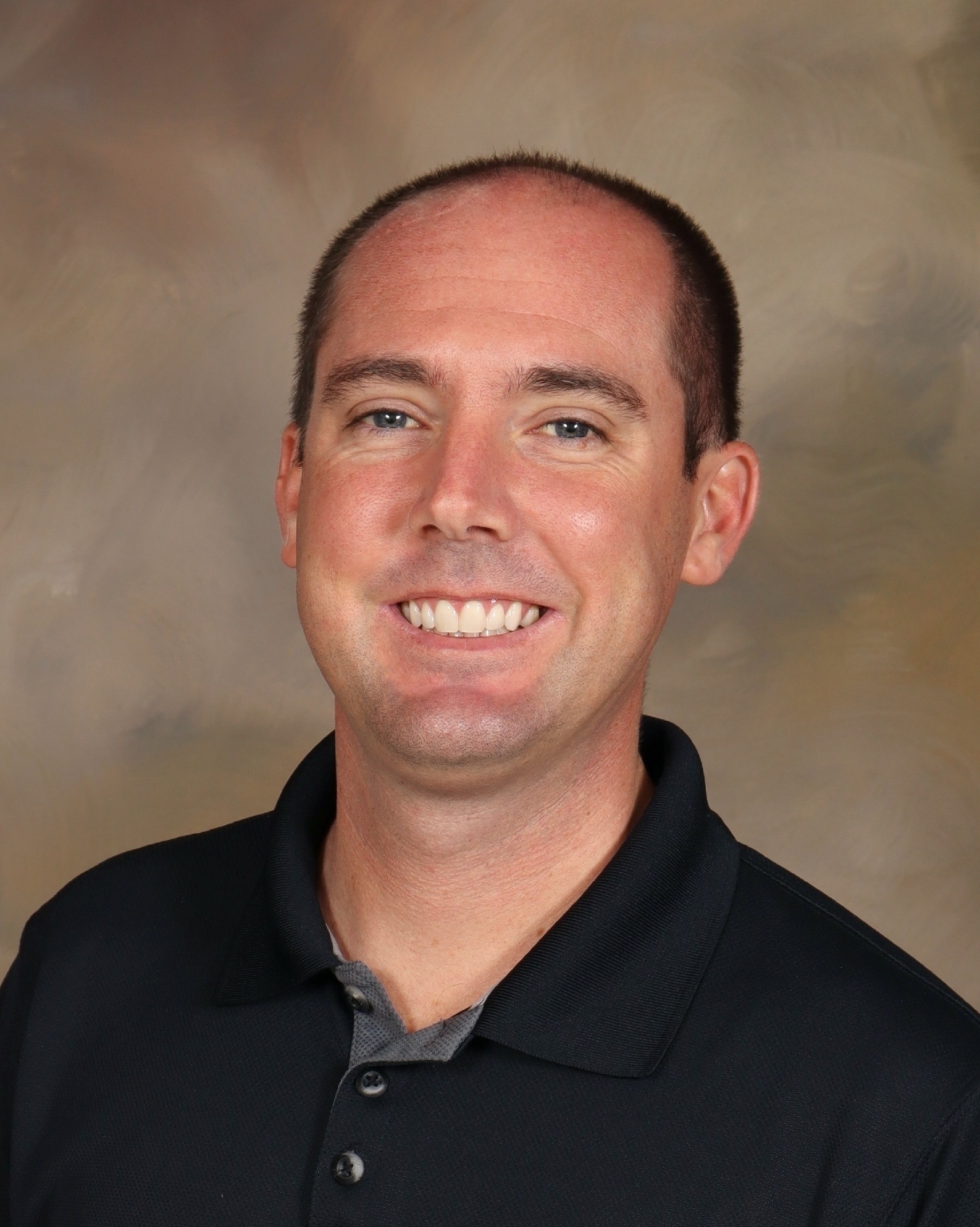