When the Milken Center for Advancing the American Dream (MCAAD) decided to create an essay contest for high school students, it turned to Milken Educators to bring the idea to life.

A new conference and visitors’ center that launched online earlier this year and will open its doors in Washington, D.C. in 2023, MCAAD’s mission is to make the American Dream an attainable reality for people across America and around the world. The “I, Too, Am The Dream” essay contest asks rising high school seniors to reimagine the American Dream for future generations and is MCAAD’s first public program.

“The initial thought for the contest was fairly simple,” says Enoh Ebong, MCAAD’s head of strategic partnerships. “We wanted to hear what the American Dream meant to young people—we wanted them to participate in the conversation.” To turn the broad concept into a detailed action plan, MCAAD turned to a “Dream Team” of Milken Educators.

“When Jane calls, I say yes”

The Milken Educators Jane called weren’t 100% sure what the project would entail, but no one hesitated to commit. “Like every Milken Educator I know, when Jane Foley calls, I say yes,” said Wade. John accepted right away: “I was in before I even heard the pitch.” Nader agreed: “When Jane calls, I always answer, because on the other end is a well-thought-out opportunity that’s strategic and thoughtful.”

The original plan for the Dream Team called for in-person meetings and a fall launch date, but COVID-19 made face-to-face meetings impossible and accelerated the timeline. Undaunted, the group moved its meetings to Zoom, with Jane and Stephanie providing a tight structure during each session that allotted each team member time to respond and contribute. “I had fears that COVID-19 would halt the process, but it actually propelled the process into an even higher gear,” said Stephanie. The online format surpassed the team’s expectations, and meetings were both productive and satisfying. “What a fun diversion during a critical time—I looked forward to those afternoons and Saturdays,” said Kathleen. “The Zoom meetings never felt like work,” added John. “Our meetings always felt too short.”

Diving into the details

Over the course of several Zoom sessions, The Dream Team drew up a mission statement and overall goals for the contest, then broke into smaller teams to define the discrete elements based on the group’s suggestions:

When the large group reconvened, representatives from each sub-group presented their conclusions and secured the rest of the team’s buy-in. The deliverables: a cohesive prompt, a detailed scoring rubric for judges, and a collaborative promotion plan that drew on members’ expertise and contacts.

The Milken Educators saw this project as a unique opportunity to work closely with their fellow Award recipients. “This is the only room you’re ever going to sit in where everyone else champions your success,” said Nader. “Sometimes groups working together end up with a result that’s less than ideal because they don’t want to hurt other members’ feelings and hold back ideas for fear of conflict. This group was iron sharpening iron.” Agreed Wade: “The other educators on this team represent the highest standard in our profession. To a person, they amazed me with their insight, their ideas, and their ability to listen, synthesize, and share.”

The topic resonated, too. “My father represented the quintessential version of the American Dream, the idea that through hard work and determination, you can become economically successful,” said Kathleen. “His father died when he was only four, and my Spanish-speaking grandmother, with a fourth grade education, raised him and his five siblings. My father was homeless for a while and lived in a barn for a good part of his childhood, but my grandmother preached the importance of education, and each of her six children graduated from college.” Kathleen’s father went on to become a lawyer, and one of his sisters earned a Ph.D.

The American Dream topic was personal for Nader, too. “I am the son of an immigrant,” he said. “I benefited from a father who worked hard, went to college here, became a citizen, and opened doors for me to experience the America we think everyone should experience. I have a personal story attached to the concepts behind this essay contest.”

Michelle was glad to see that MCAAD is intent on exploring the dynamic tensions of the American Dream, and the challenges in securing it for future generations. “The Center has a unique opportunity to chart a new path in history,” she said. “I knew I had an obligation to advocate for the voices of those who are the heart of America, yet who are often historically marginalized in these discussions. As a black female educator who was the first in my immigrant family to graduate from a four-year college, and having spent most of my teaching career serving predominantly black and brown children, I was focused on leveraging and inviting student voices from all backgrounds.” 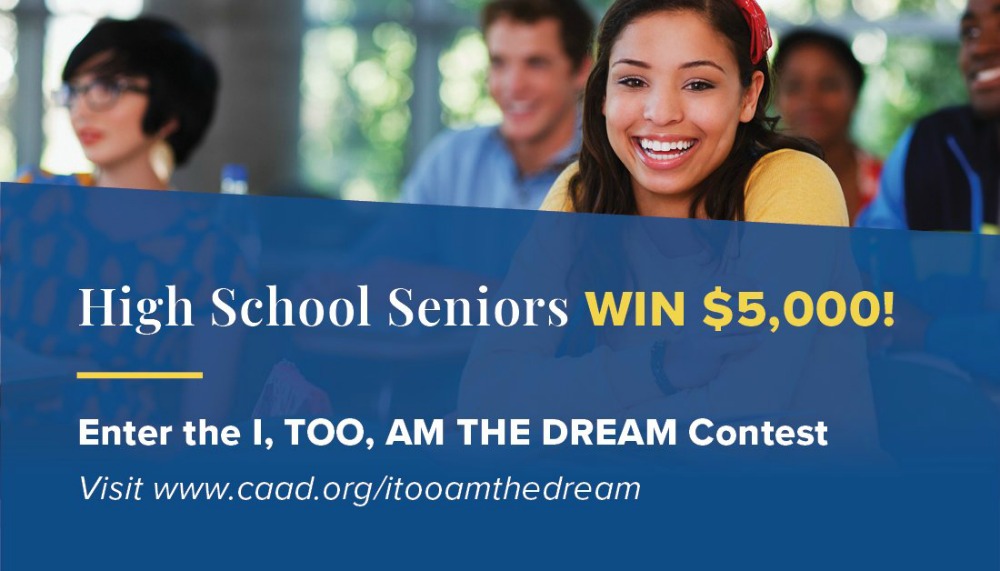 So what surprised team members about the process? For Joyce, it was “the intentionality of each decision. Everything went back to making sure we were holding true to our mission—making sure all students would feel invited to submit an entry, that all voices felt valued.”

The murder of George Floyd, and the nationwide protests that followed, made the conversations particularly timely. “Equity was at the heart of every decision made throughout the journey,” said Stephanie. “It took a tragic event for us to feel the magnitude and gravity of our discussions as our nation mourns and cries for justice. Today’s students are the harbingers of change, and the contest provides a forum for them to reimagine an American Dream that is inclusive of everyone.” Kathleen worried that the national unrest might impact participation, “but I realized that this is the time to share a new possibility. I hope students see the essay as their way to express what can be. It is, after all, the perfect time to dream.”

Enoh wasn’t expecting the team’s emphasis on collaboration to land on recommending two equal winners and 15 finalists, rather than more traditional first, second and third place awards. “The educators really succeeded in making me see things differently in that regard, and I appreciated that,” she said. She was also surprised that the project was so much fun: “There’s a great Zoom screenshot from one of our sessions, and literally everyone is cracking up!”

Kathleen had several takeaways, both practical and conceptual. “I learned how to structure Zoom calls with efficiency and productivity,” she said. “I learned the value of sitting with ideas, considering them, allowing them to marinate and coalesce. I am a realist, but I learned how much dreaming matters.”

Working on the MCAAD contest was an overwhelmingly positive experience for the whole team. “I was surprised at how seamlessly we were all on the same page,” said Lauren. “All of us were aligned and shared the same vision so passionately. It was really nice to be surrounded by educators who have the same kind of passion that I do for amplifying students’ voices and giving them a platform.”

“This project challenged me to autopsy my own past, including beliefs and actions, and to answer to an exceptionally motivated and qualified cohort,” said Wade. “I hope I brought a sense of optimism to our team’s work. I believe the Center will galvanize a new conversation about what it will take to preserve and protect America's most democratic ideal: that each of us deserves the opportunity to pursue a true, God-given potential. By the time the Center opens in 2023, perhaps our team’s work—and, especially, the words of the students who respond to it—will have pulled us all a bit closer to that hope.”

Reactions from students already indicate that the group achieved its goals. “One student told me she doesn’t really do competitions, but felt this was a prompt she could answer based on her own life,” says John. “She realizes that this contest recognizes and values her experiences as the daughter of immigrants. That’s a success.”

Team members hope the contest will have a lasting impact. “We have set the stage for students and educators to engage in this dialogue,” says Michelle. “I hope this contest is a catalyst for deeper discussion in schools and communities and a call to action.”

In the end, the Dream Team helped deliver a meaningful opportunity to introduce MCAAD to the public. “I commend the group for their innovation, dedication, focus, teamwork, and passion to give all students a voice in a national conversation,” says Jane. Adds Michelle: “A small group of boldly aligned educators is an unstoppable force.”

Here are the mission statement and prompt for the inaugural I, Too, Am The Dream Contest. The contest is open to rising high school seniors for 2020-21 and entries are due September 14, 2020. Two winners will each receive $5,000; their work, along with 15 finalists, will be featured on MCAAD’s website and at the visitors’ center when it opens. Please share with your students, colleagues and districts!

Purpose: Create and inspire the next era in America

Prompt: The story of the American Dream is one of aspiration, potential, hope, and dynamic tensions—opportunity and injustice, achievement and inequity, and triumph and challenge. Some have argued that the Dream is more of a myth than a reality. Many, who challenge the conventional understanding of the American Dream, cultivate a more inclusive and expansive vision of the Dream. They embrace the invitation to be ambassadors for advancing the American Dream, securing the Dream for future generations. Drawing on your own personal experience and/or the experiences of others, describe your vision for a reimagined American Dream and how you envision advancing it for yourself and others.

"[During my first year] I realized that not everything in teaching is perfect and orderly. The sun and the moon will not always be in alignment. I can’t change every student who comes through my door. I learned how to adjust and adapt....I can’t change or affect all of my students, but I will go forth, be courageous, and continue my lessons and instruction as long as I can make a difference in even one of my students’ lives." 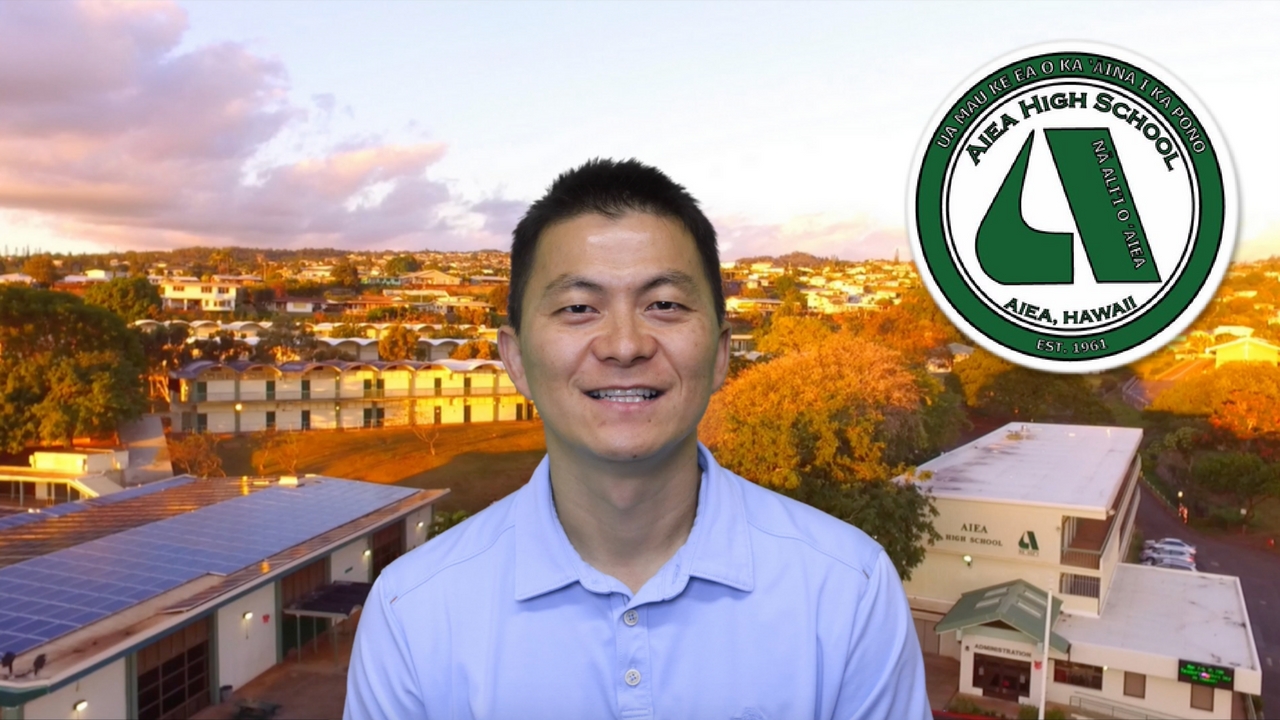