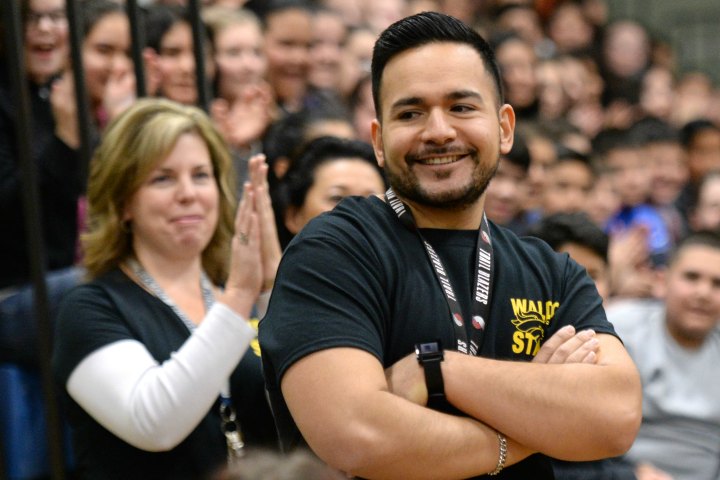 When students complain about school or work, Ricardo Larios (OR '15) cuts the conversation short. "We have so much," he says, "but often we fail to appreciate the abundance." He received his Milken Educator Award at Waldo Middle School in Salem on January 6, 2016.

Ricardo Larios: I participated in a Reading Buddy program in high school. From there I was hired to work in the after-school program. As I started going to college, I strayed away from education, but after graduating from Oregon State University, I was like: Now what? I joined AmeriCorps, serving at Independence Elementary School, of all things helping students with math and running an after-school program. As my experience wound down, I made the decision: Teaching is what I wanted to do.

Ricardo: My first job was as a gopher. My dad is a mechanic, and I still remember him telling me the different wrench sizes so that I could "go for" them. I thought, "This is going to be awesome!" Then I learned that I did not want to work on cars (it was dirty, difficult and dangerous).  For my dad, being a mechanic was an upgrade from picking apples. He didn't really have many options because he didn't go to school. Going to college gave me a choice but, at the same time, helped me to be grateful for all the sacrifices my parents made. When I hear a student complaining about work or school, I don't allow it. We have so much but often we fail to appreciate the abundance.

Ricardo: My parents. They taught me so much, from being a hard worker to being patient. At school, it was Dr. Leo Rasca-Hidalgo, my professor at Chemeketa Community College. He was the first teacher I could relate to. His stories were familiar even though I had barely met him. More than anything, he taught from his heart and prioritized strong relationships as a basis for teaching. I really model my approach from him.

MFF: Tell us about your first year in the classroom.

Ricardo: My first assignment was eighth-grade U.S. history. We were on an A/B schedule, so I taught the same lesson eight times over two days! In the beginning, especially on Sundays, I was nervous wreck. I focused on what could go wrong instead of what could go right. I remember when "Billy" was trying to help me manage the class by yelling, "Shut up!" I responded as coolly as possible, saying, "I don't need your help." Billy was like, "Sure looks like you do!" I flipped. Overall, I just remember feeling exhausted at the end of each day. It was like my boat had a leak and my bucket was too small. My supervising teacher made it look so easy, but it was never the same for me.

Ricardo: I tell them: We need you. Teachers don't fall from the sky or grow on trees. We need people who look, talk, and think like you! Be the teacher that you admired and not the one that made you tired. Every day I tell students, Hey, you would make an awesome teacher. It is my job to encourage them and show them the door to education. When you least expect it, they walk through it.

Ricardo: They are proud to be part of the school. Our school is often referred to as "ghetto," but having this much positive publicity goes a long way to mitigate that stigma. It created a buzz, but none more powerful than having students say that they want to be a teacher. During career exploration, teaching rarely makes it to the top of the list, but I think the Milken Award assembly made a switch flip in a lot of our students. It got them thinking, "Hey, that could be me one day!"

Ricardo: The mornings! Because every day is a new opportunity to change a person's life, help someone learn a life story, or be the only person in their life who cares. Mornings are a metaphor for new and renewed possibilities.

Ricardo: The small answer: buy a class set of Chromebooks for each teacher and train them to use Chromebooks in their classrooms (our school is barely beginning down this path).

The medium answer: have two teachers in each classroom to co-teach. Can you imagine the level of reflection and sophistication that would bring to lessons? The only time two teachers are in a class is during inclusion or student teaching. Having two veteran teachers in class would make learning so much more powerful.

The pie in the sky answer: use that money to have school-wide team builders to teach collaboration and the language of success.

MFF: When you retire, what do you want your former students and colleagues to say about you?

Ricardo: "That man changed my life!" "I want to be like him." "He never disrespected me."

Ricardo: Probably helping my dad or mom with the family business (a bakery).

MFF: Finish this sentence: "I know I’m succeeding as an educator when…"

Ricardo: "...I get goose bumps!" Whenever a student makes a powerful statement, has an "aha!" moment, or makes me proud, I get goosebumps (it's like my spidey sense). I tell my students I live for this moment.

"I am starting an InspireNOLA Educator Award (with an unrestricted financial award), similar to the Milken Award. It will go to an outstanding educator at an InspireNOLA charter school at the end of the year. It was so wonderful to be acknowledged that I want other educators to have the same experience." 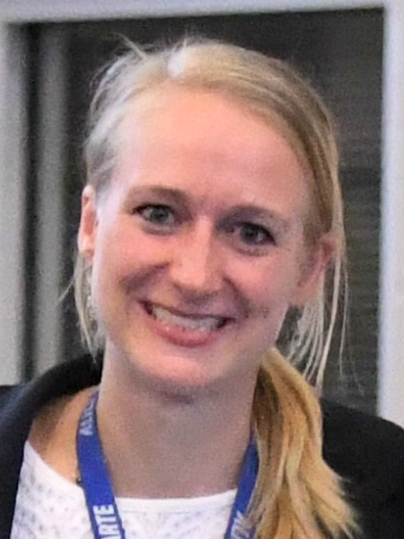