He Is My Success Story 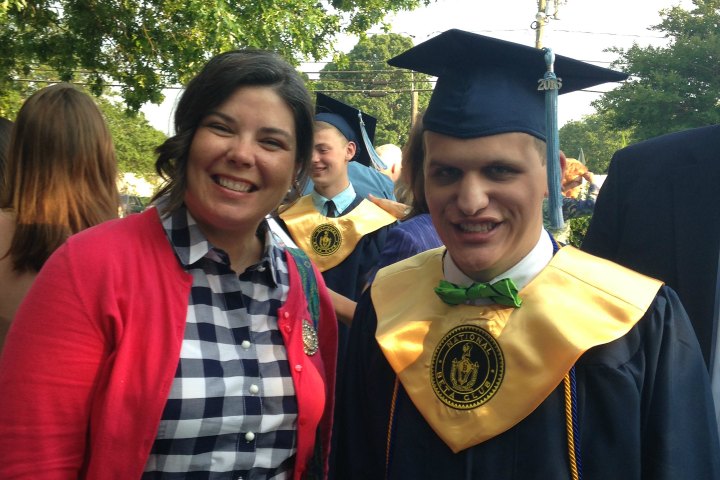 This article is reprinted with permission from The Teacher's Loop by Milken Educator Shasta Looper (SC '12), pictured above with her former student EC.

On Friday evening, I had the honor of being a special guest at a former student's high school graduation. While that may seem mundane and an everyday occurrence for many, this invitation meant more to me than words could adequately express. While this student was not loved or liked more than the others, he definitely had a hand in making me the teacher I am today. So often, as a teacher, I focus on the success of my students, and rightly so, but this student completely transformed what I knew about teaching, shifted my mindset, and set me on a path that could not be ignored.

It was no surprise that this young man would be placed in my classroom that year. At our little school, students were placed into classrooms based on learning styles. Some students found themselves placed in analytical classrooms where every detail was important, routines were well established, and there were clearly defined expectations for assignments, projects, and any other activities that took place throughout the year. Some students found themselves in a global classroom where the teacher painted big-picture ideas first and allowed things to occur organically, a classroom that looked quite a bit different from the analytic room. And others may have found themselves placed in a flexible room that incorporated elements of both styles. That also meant that teachers were assigned classes based on their learning style or teaching style as well. I often fell on the analytical end of the spectrum, but was sometimes given a flexible classroom depending on need. This particular year, I believe I was the flexible teacher, but leaned toward analytical tendencies. He needed routines, no surprises, clearly defined outcomes and boundaries.

Before school began, I met with his mom. She came into my classroom with a giant binder that provided a very clear picture of this young man as a student. We talked about strengths and weaknesses, areas of growth that were in progress, areas to push further, triggers that would result in his shutting down, and strategies that had worked in the past.  At the end of our meeting we both agreed that he needed to be pushed to try new things and to offer no excuses. I felt prepared and knowledgeable to enter the school year with success. Little did I know that this fifth-grader would teach me what it truly meant to be a teacher.

Up until this point, I had approached teaching with creativity, but (honestly) with a binder full of lessons that I knew had been successful but didn't really reflect the learning styles or needs of my classroom of students. Differentiation was just starting to be the buzzword across schools and districts. Books were being read on the topic, discussions being had, but the year this child was present was when I truly saw the value of tailoring my instruction for individual students and where they were on the learning continuum.

Early in the year, the student and I developed a mantra, so to speak, that we used when he needed to consider an alternative. That mantra was "I'm adaptable." It was hokey and a catchphrase, but we wanted to get the full fifth-grade experience, from tasting new foods, learning new social skills, and trying new things.

He came to me with very clear expectations of where he would sit and said that he couldn't use a cubby that was near anyone. We developed a plan: His desk would be by mine to begin with, but the goal was to move it closer to a table in hopes that he would work with a group before the end of the year. His chair had a yellow dot placed on it so it was easily identifiable to others; they weren't allowed to touch it. His books were kept in a cabinet instead of near others. When I needed him to talk to a group, I prepared him  ahead of time. We role-played the conversation and we chanted "I'm adaptable."

Each time I cooked for Social Studies, we checked the ingredients to make sure that they were within his dietary requirements and then tasted a spoonful. He was allowed to spit it out if he wanted. At recess he was allowed a certain amount of time talking to the teachers and then was sent to socialize with other kids, armed with predetermined topics.

He questioned me, challenged me, gave me feedback. It wasn't uncommon for him to ask for my resources or ask why we were spending so much time on a topic when there was only going to be one question on the PASS test. I became comfortable with saying "I don't know." I began to ask for feedback — not just from him, but also from other students — on lessons that I planned. I shifted from being the one to create the expectations and requirements of a project to a teacher who created them with student input. I began planning lessons with my students in mind, not myself.

Fast-forward six years, and I find an email in my inbox asking if I would be his mentor on his senior project — not just any project, but a book that provided his perspective of life with autism. Of course I said yes. We worked all year sharing drafts and feedback. Reading stories of how autism affected him in different settings. Discussing the challenges that were present, what successes and opportunities were there, and what his path would be after graduation.

I received my signed copy this week and cried like a baby when I read it again in its final form. While he has had extreme success as a student, my success has been linked to his in so many ways. If I had not had him as a student, I wouldn't have made a shift in my teaching.

As I sat in the audience of his graduation Friday night, I could not have been more proud of him and the journey he has traveled. As I stood to celebrate his accomplishments, I was so thankful for the opportunity I had as his teacher. He helped me learn what was best for students, helped me become comfortable with letting my students be the teacher once in a while, and taught me never to settle for what has always been done, even if it has been successful.

Thank you, EC, for being my success story.

"Teaching ELLs is very exciting because I love when they start speaking in English, whether it’s asking to use the bathroom or for a new pencil. I always tell my students they are smarter than I am because they already know one more language than I do!" — Spotlight: Michelle Johnson (RI '18) 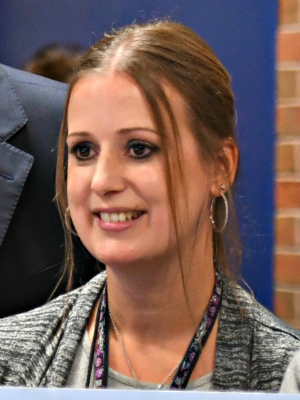