At school, they call her "momma." And like all mothers know, parents aren't just there to buy the prom dresses or make sure the homework's done or that there's food on the table (even though she does all of that too) -- they're also there to listen and engage their children in conversation. Shekema Silveri (GA '11) not only gets this, she uses it as the fundamental building block of her Advanced Placement English Literature and Language classes at Mount Zion High School, a school in a Title I district in Jonesboro, Ga. "Advanced Placement doesn't necessarily mean the same thing here as it does in another district," Silveri said. "We don't have reading classes, so kids come to AP not really knowing what AP means. My job is to get them to that level. I don't want to intimidate them, make them afraid to take the class, but I also want to let them know that being in Advanced Placement is about who you are as an individual." Having just finished her second year with the subjects, each of her classes is filled to the brink not just with your typical over-achievers but also with students who otherwise wouldn't consider trying these advanced courses.

"My classroom is kind of what they call a flip classroom," Silveri explained. "A flip classroom is where you do the vast majority of your writing and research outside of class and in class, you have a dialogue. In college, you do everything at home and then you come to class to discuss it. It's pretty much the same thing as we do here. We don't do a lot of handouts, worksheets, things like that. After I hand out the syllabus at the beginning of the year, that's pretty much the only sheet they're going to get from me." While there is no doubt who is in charge in her classroom, Silveri has no qualms about loosening the reigns and letting her students guide discussions and debates. She'll also bring outsiders in so that her students can broaden their world views and get different perspectives. Visitors have included everyone from Rodney Bynum, a fellow educator in her department who -- being that he is Caucasian and grew up in northern Florida -- has different life lessons than Silveri and most of her students to Jacob Holdt, a photographer and social activist from Denmark who has visited the school two years in a row. She also used some of her Milken Award money to invite James DeWolf Perry to her classroom. A descendant of U.S. Senator James DeWolf, the man responsible for bringing the most slaves to the United States, Perry has created a documentary and resource center dedicated to researching African-American history in America. 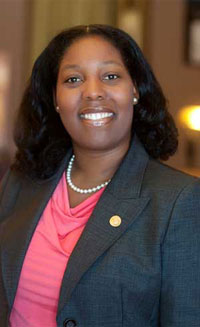 "We've been taught that a quiet classroom is a good classroom," Silveri said. "But how are these kids supposed to learn to speak publicly and how will they learn to engage with professors in college if they've never had the opportunity to hear the sound of their own voices? [My goal is not only] getting them to think critically and intelligently, but also to give them the ability to speak intelligently and critically. Getting them to debate … those kinds of things, those are life skills." The class reconvenes after school via Twitter (Silveri tweets with the handle @MrsSilveri) and her class blog, Ssilveri.edublogs.org. Online, they'll work on essays and talk about what had happened in school or perhaps about a news story or a documentary that Silveri has shared on the blog. (In fact, her blog has gotten so popular that students in other countries use it; a student in Malaysia even got a four on the AP English Literature exam after following her lesson plans and discussions). Mouse over each photo to see Shekema Silveri in action.

Silveri feels that these strategies have had a positive impact on her students' written, as well as verbal, skills. "I grade for content and ideas," she said. "The grammar is only a problem if it interferes with the actual meaning of the text and that's how AP readers grade. There's a connection between writing and conversation and students who have the ability to speak more are going to be better writers. They need the ability to actually hear their own voices more. When you hear it and it doesn't sound right, that's how you begin to correct it in your writing." It's easy to see how this method of teaching bodes well for literature discussions, but can it work for all subjects? Silveri thinks so, although she acknowledges that her approach may be hard to accept at first. "If you know that there's a system in place that produces a mass underclass in society and you don't try to free them from it, then you're not doing the best for your students," Silveri said. "We can get them to college, but if we don't teach them life skills they'll be home by the end of the year."

Shekema Silveri (GA '11) is an AP English teacher at Mount Zion High School in Jonesboro, Ga. She can be reached for comments via email at stholmes1@gmail.com.

"Humanity always comes before academic content, so take the time to listen to your students, give them space to be themselves, and remember that many of them look to you for guidance through these uncertain times."