Humanity, Hope and the Human Spirit 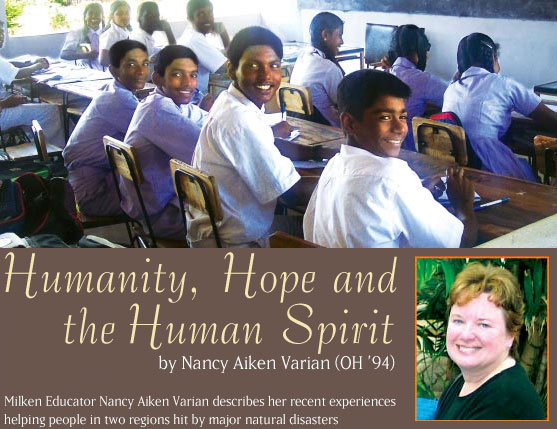 BATTICALOA, SRI LANKA — Sitting at a modest wooden table on an open patio in the still, thick summer heat of Southeast Asia, I stared in amazement as Valarian shared his unbelievable story. In emotional detail, he relived the day that had changed the lives of so many.

It was December 26, 2004. He had taken his new motorbike for a ride down by the ocean. Without warning, he looked up and saw a wall of water coming toward him. He turned his bike around and sped inland, pedaling as fast as he could, but within moments, he was enveloped by the wave. The great force of the water washed his bike out from under him. He instinctively reached for his cell phone and held it above the water roaring all around him. His only chance for survival was to grab onto a tree and climb out of harm's way. He frantically called Laure, his wife, and told her to take their two small boys to the highest elevation in their home. Before she could ask him to explain why, his cell phone went dead.

Valarian described his shock and disbelief as he spent hours in that tree holding on, waiting, and praying. Watching his life flash by, he tried to make sense of what was happening. Valarian is a Tamal and a native of Sri Lanka. His wife Laure is Swiss. They both work for humanitarian organizations, and for months following that unforgettable day, they were immersed in the recovery and relief efforts of the deadly tsunami that rocked Asia and stunned the entire world. 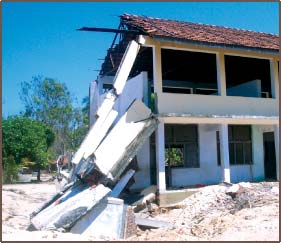 After Valarian recounted the harrowing events of that fateful day, he shook his head, smiled, and pushed some photos across the table toward me. The photos showed a mangled, rusty motorbike with barnacles attached to the metal. He chuckled as he told me that six months had passed since the tsunami, and just three days earlier, a neighbor had recovered his bike after it washed up on shore. He had never thought he would see that bike again.

It had been six months after the tsunami hit. I had to pinch myself. Was I really here in Sri Lanka? How had I gotten here?

Growing up in Mississippi, I had always been an active member of 4-H, the nationwide organization that promotes leadership, citizenship and life skills among America's youth. After earning my bachelor's and master's degrees at Mississippi State University, I went to work in Washington, D.C. at the National 4-H Council. It was there that I learned about the international youth exchanges that the 4-H program sponsored, and I became a delegate to Sri Lanka in 1977.

Enroute, I had a stopover in Karachi, Pakistan, where I had some problems with my luggage. Not knowing the language, I was having difficulty resolving the situation, when a young man standing behind me offered to help. His name was Devinda Subasinghe, and he was returning to his native Sri Lanka after three years of attending college in Indiana on a swimming scholarship. We became friends, and toward the end of my stay, I spent several days in the capital city of Colombo, where he introduced his city to me and showed me all the highlights.

I recently learned that he had been named Sri Lanka's ambassador to the U.S., and was serving in that position when the tsunami hit in 2004. 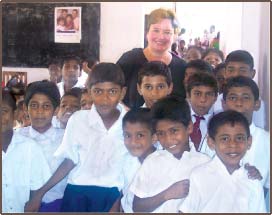 During that first trip to Sri Lanka, I lived with nine families over a five-month period. The experience changed my life. I've always had a special place in my heart for this country that took me in and taught me so much about life and a culture so different from my own. So when I heard how badly Sri Lanka had been damaged by the tsunami, the news hit me on a deeply personal level. Several of the families I had lived with during my first visit were located in coastal villages that the tsunami had now wiped off the map. I felt helpless, and I wanted to do something to help those who had helped me almost 30 years ago.

Since 1980, I have lived in Ohio with my husband and children, and pursued my career in education: teaching, serving as an elementary principal, and now working at the college level. Over the years, my passion for travel and cultural awareness has grown, and has taken me to countries all around the world. In the summer of 2004, I traveled with several other educators to Thailand and Vietnam through the sponsorship of the East West Center for Asian Studies in Honolulu, Hawaii. As an alumnus of the organization, I have continued my relationship with them, conducting workshops and helping host a teacher exchange. In December 2004, I found myself working with them again, helping raise money for victims of the tsunami. Our "Schools to Schools" program raised thousands of dollars for stricken schools in the suffering countries, especially in Sri Lanka and Indonesia.

In June 2005, the East West Center sent me to Sri Lanka on a fact-finding mission. They wanted me to see the schools that had been hit by the tsunami, evaluate their needs, offer suggestions for the funds that had been raised by schoolchildren across the United States, and make the needed contacts to send aid and assistance.

With Valarian and Laure as my guides, I spent hours visiting the hardest-hit sites in the city of Batticaloa on the east coast of Sri Lanka. I was also assisted by a cab driver named Nadana, who had been recommended to me by Neely Tucker, a Washington Post photojournalist from my hometown of Starkville, Mississippi. Nadana spoke perfect English and knew the country well. One night, he picked me up at my hotel at 3:15 in the morning, so that I could visit several schools in a region besieged by Tamil and Singhalese unrest.

During my time in Sri Lanka, I visited three schools that were operating in makeshift facilities while teachers and residents tried to rebuild both the schools and the lives of the students who had suffered terrible losses, both physically and emotionally. I visited temporary housing and talked with people who had lost everything and yet were trying to hold onto hope for the future.

I witnessed the massive aid efforts of many humanitarian groups who, alongside the Singhalese people, were building new homes and schools to try to rebuild the lives of so many who had lost so much.

I traveled to eastern, southern and western coastal areas and visited seven schools that needed help. The experience was heart-wrenching as I saw the loss and devastation; but it was hopeful and uplifting as well, as I witnessed recovery, rallying and rebuilding.

In August 2005, another catastrophe hit that touched my heart and encouraged me to try to lend a hand.

Hurricane Katrina had wreaked havoc on Mississippi, the state where I grew up as a child. For one week in October, I had the good fortune to go to Mississippi and volunteer at the Helping Americans Needing Disaster Relief Distribution Center (HANDS) in Jackson. The group, established and led by Christ United Methodist Church on Old Canton Road, is an amazing tribute to volunteerism and compassion. The center is a clearinghouse of goods needed by victims along the Mississippi and Louisiana coasts. The volunteers put in long hours and worked side by side with people who came from all areas of the country to contribute their time and effort.

One morning, a couple pulled in with a U-Haul full of goods. Each pallet was piled high with boxes, and each box was labeled neatly with its contents and ready to be distributed. The couple had driven three days from Long Island, New York, and had brought items collected from area churches. I asked them their plans and they said they would unload the truck, drive it over to the rental place to turn it in, and fly back to New York the following morning.

That is what American "good will" is all about: neighbor helping neighbor. Whether our neighbor is next door, across the country or across the globe, we can be citizens of the world in giving to others, as we know we would appreciate the help if we were in need. We can't forget that the suffering and pain will go on, and that aid and empathy will be necessary for a long time to come in Asia and Mississippi and all along our southern coasts.

I had wanted to do something to help as soon as I had heard about the tsunami and, later, the hurricane. But I had hesitated, wondering what I, one person, could do. Then I came across this poem by Edward Everett Hale:

Nancy Aiken Varian (OH '94) is the director of the Center for Professional Development at Malone College in Canton, Ohio, and is working on her Ph.D in literacy at the University of Akron. For more information, contact Nancy Aiken Varian at nvarian@malone.edu.

“It doesn't seem possible that it's been nine years since I was sitting with my own Class of 2001! On that day, I began an amazing journey that has impacted my life in a profound and powerful way—as well as the lives of other educators and students in Louisiana that I have had the privilege of meeting along the way. I realized I was now part of something so inconceivable, that I still have to pinch myself to make sure I'm not dreaming. In 2001, I also learned about the TAP System—a comprehensive school reform initiative that I knew I had to be a part of. After all, TAP invests in teachers while keeping the focus on student growth.”