A Modem for Success

Who says it ain't easy being green? Kristen Drake (GA '06) to first began exploring the world of online lectures with her own website in 2000, eventually adding assignments and quizzes for varying grade levels and subjects. She then received raves for her innovative ways of educating kids with a newer, more environmentally friendly medium after she introduced her computer-only, worksheet-free classroom and online homework projects during the 2008-09 school-year at Vanderlyn Elementary School in Dunwoody, GA. Students were even asking for more homework because they enjoyed the computerized quizzes so much. 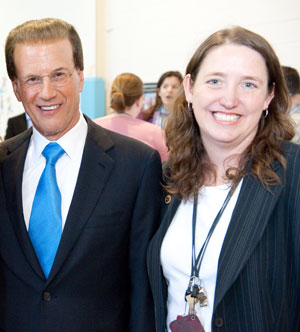 But she also got a bit of flack.

Naysayers said Drake had the advantage of a more affluent school that could afford to part with old computers and had kids who were already accustomed to modern technology at home so they could easily adjust when she instituted the online-only homework assignments. Like any great Milken Educator would, Drake jumped at an opportunity to prove her methods would work in other settings. She took her program to Hightower Elementary School, a higher needs school in her district, for the 2010-11 school year.

At Hightower, Drake knew she wouldn't be able to implement online homework assignments as easily as she could at her previous school because she said less than a fifth of her new students had Internet access at home at the beginning of the year — although that fraction grew to about a third — so she utilized the classroom computers and interactive white board to keep the students engaged.

"I predicted it would be much more difficult to get them acclimated to technology, but it was just as easy," Drake said of her reservations at starting the project at a new school, where her new students quickly picked up the basics of working with Microsoft Word.

There were also other challenges, like when her students who spoke limited English did poorly on their spelling tests. 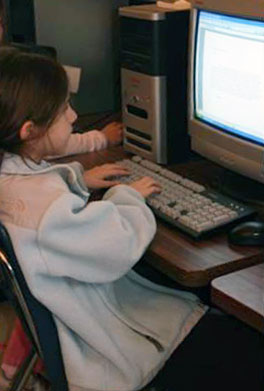 "I predicted it would be much more difficult to get them acclimated to technology, but it was just as easy," Drake said of her reservations at starting the project at a new school.

"One girl was able to articulate that she needed the test read aloud to her," instead of letting the students read a multiple choice question on their monitors and decide on a correct answer, said Drake, who then began to record her voice administering the test and incorporated an audio function on her website. The grades improved almost immediately and Drake realized that this technique would also be useful for special needs classes.

Drake's new assistant principal was also concerned that the screens and keyboards would amount to Drake forsaking hand-written assignments.

"When I talked to the kids about it, I said that you have your choice to sometimes write stories [longhand],"Drake explained. "It was neat to watch the kids talk through why they chose to do something." One student chose to hand-write her assignments because it was easier for her while another chose to type them because it was faster.

Hand-written assignments are important, Drake acknowledged, especially since there was no guarantee that students would have as ample computer access after they graduate from her classroom.

But Drake's unique approach paid off.

"The school uses Accelerated Reader to monitor students' progress in independent reading," Drake said. "Students read books and take online quizzes to measure comprehension. They receive points based on their score. The second grade school-wide goal is 50 points. When we closed the school year, 22 of 24 of my children exceeded the goal. Of the two who didn't make that achievement, one was enrolled only two weeks and already earned 17 points."

Now, teachers on every grade level at Hightower have begun using her student website in their classroom.

"For me, success is making a career of helping others recognize and achieve their own potential." 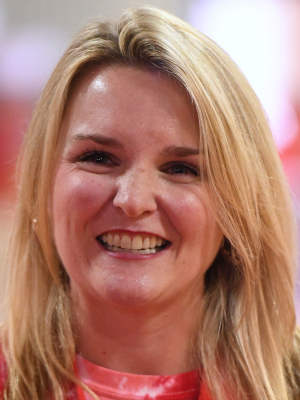