The MVP Award Goes To…

As millions of Americans watched the Super Bowl yesterday, with all of its excitement and fanfare, we couldn’t help but imagine—as we have since the Milken Educator Awards was created nearly thirty years ago—how great it would be if our nation’s educators got that level of attention. Teaching is often a team sport, after all, and it requires constant training and perseverance. Of course, it also has some important differences. Perhaps the most important one is that every single teacher can be the Most Valuable Player (MVP) in a child’s life. Whatever his or her approach to reaching peak performance and reaching every child, when an educator rises to the levels of those we honored this past week, there really are no losers. And unlike the Super Bowl, we can even have two winners from one state; just ask Laurie Davies and Kelly Wilber of Indiana!

Fourth-grade teacher at Pine Tree Elementary School in Avon, IN 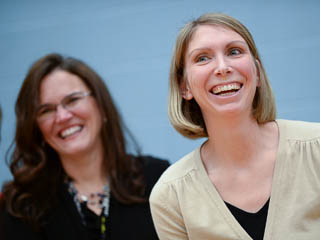 One fact about Laurie: She is known as “the data queen” for her use of student data to improve and tailor instruction, which was crucial to her success as a mixed first- and second-grade teacher in previous years. Learn more >>

Don’t miss: Laurie, still shaking from the news, talks of her goal to “make a whole room full of teachers and inspire others.” (video)

Fifth-grade teacher and TAP Mentor Teacher at Southport Elementary School in Indianapolis, IN 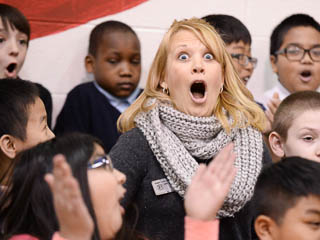 One fact about Kelly: Her student engagement is so outstanding that Kelly has modeled it for visitors for over 50 schools—some of whom assumed that her class was gifted and talented, rather than the diverse group that they are. Learn more >> 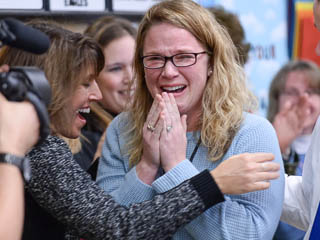 One fact about Maggie: Her own struggles with dyslexia when she was a student at Yellow Springs Elementary (where she now teaches) not only helps her relate to any challenge her students may face, but also the confidence-instilling knowledge that they can overcome it. Learn more >>

Don’t miss: Maggie being welcomed by Lori Milken, Mike Milken and Joni Milken-Noah to the family. And an emotional Maggie tells us about the greatest gift she gets from her job (video).

Congratulations to all three of our new MVPs, who each deserve a ticker-tape parade. Thank you to each of you who give your all to your team, whether as your classroom quarterback, your school’s head coach or any other position on the field—your contributions are invaluable and the true winners are the students you inspire.