Setting Sail for a New World

Happy Columbus Day! Some of you may be enjoying the day off, although many of you are likely still using at least part of the holiday working on making this the most successful semester for your students. In honor of the day, we thought we’d share some new discoveries of our own: three new incredible educators! Like a seasoned explorer, Dr. Jane Foley and the tried-and-tested Milken Family Foundation crew traveled thousands of miles (we cannot confirm at this time that the planes they took were named Nina, Pinta and Santa Maria) to three of the original colonies in the new world. There, they found and brought back fantastic (photos and videos that we know you’ll) treasure. 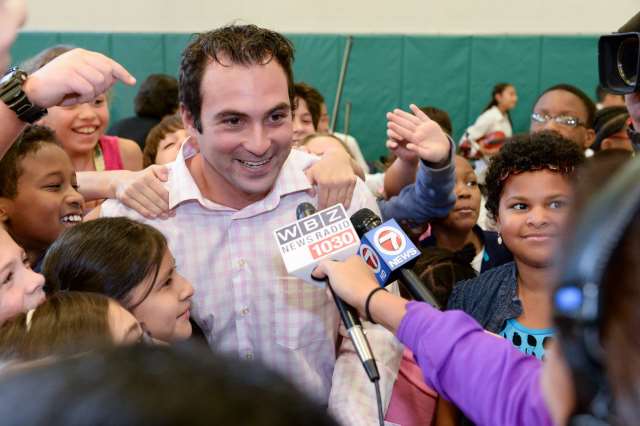 Jane’s first stop was McGlynn Elementary in Medford, MA. There, she was well met by nine veteran Massachusetts Milken Educators who helped the world discover our very first 2014–15 recipient: fifth-grade teacher, basketball coach, skating club lead and “Summer Fun Program” director Anthony Petrelis. Was it the shock of hearing his name that kept Anthony from getting up right away, or was it all of the surrounding students who jumped on him screaming with excitement? Here’s the video with the answer and don’t miss the photos for the priceless reaction of students excited by the fact that one of their teachers was being recognized with a $25,000 prize. 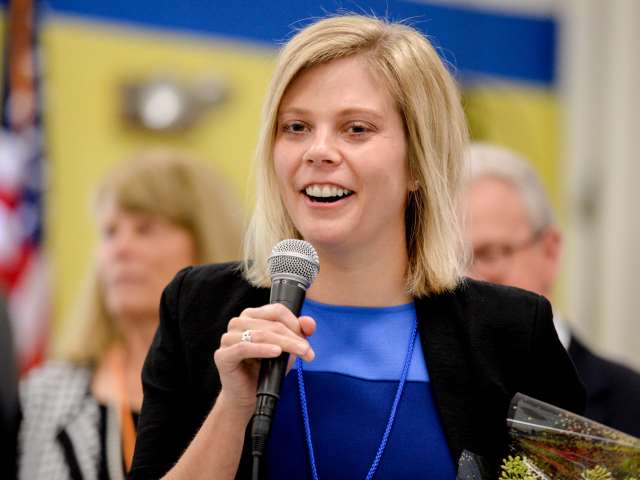 The next stop on last week’s exploratory tour was our nation’s smallest state. With its tight-knit Milken Educator Network (photos) and support from all levels of education officials, Rhode Island keeps proving that when it comes to outstanding educators, state size is clearly not a factor. At Captain Isaac Paine Elementary in Foster, Jane and company surprised reading specialist Erin Quinlan, who helps students discover reading and their own self-esteem. Erin incorporates multiple subjects into her approach, helping students perform at their best across subjects and disciplines. You don’t have to be a specialist to read the reactions of her students when Jane reveals Erin’s name as the newest RI Milken Educator (video). 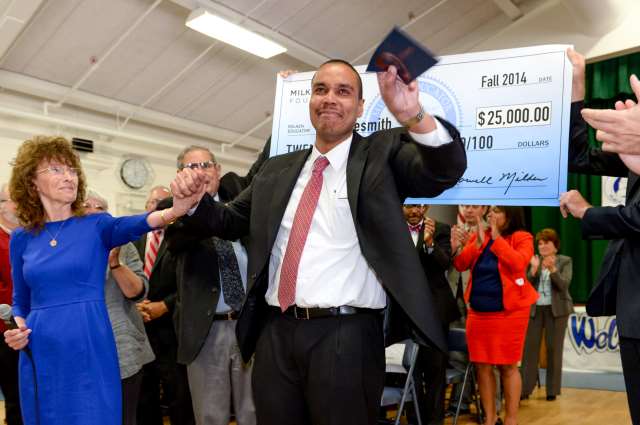 Only hours after surprising Erin, Jane and the Milken Educator Awards made perhaps the most “shocking” discovery of the week in Bloomfield, Connecticut. The video of stunned principal Desi Nesmith of Metacomet Elementary is definitely one for the records! Desi had no idea that the assembly (and subsequent reception) he was planning was actually a Milken Educator Award surprise…much less that it was in his honor. It was quite an emotional reaction by the man who calls his school and neighborhood “home.” And if you want to know who it was that Desi spotted across the room and why he had to run to him after hearing his name, this photo explains a lot (and don’t miss the rest of the gallery to watch the surprise unfold)!

Of course, we no more discovered these outstanding talents than Columbus did America—their colleagues and students have known of them and their impactful dedication for years. Nonetheless, we’re thrilled to bring back news of them to you and share in the wealth of knowledge and inspiration that these discoveries bring.

A special thank you to the dozens of you who shared your warm welcomes on Facebook, Twitter and the photos and videos on the Milken Educator Awards site. Every voice multiplies the sense of family and appreciation that every one of our 2014–15 honorees feels and we at the Milken Family Foundation appreciate it as much as they do. We hope you will join us there as we honor more outstanding educators this week!