"Never in my wildest dreams did I imagine I would be the subject of the breaking news story."
—Sarah Berndt (WI '13)

The 2013–14 Milken Educator Awards are “off” to a great start. With amazing media support, the stories of our three new Milken Educators have been making front-page headlines, primetime TV news features, dozens of online articles and more Twitter and Facebook posts, shares, likes, favorites and retweets than even our math teachers would try to count.  Even with all of the other attention-grabbing news this week, the spotlight is once again pointed at amazing educators and it’s your time to shine.

With any luck, if you turned on your TV, computer or phone, you have been enjoying the stories of our latest additions to the Milken family. In case you missed any of it, here is a recap of the week and some insights into our new Educators. 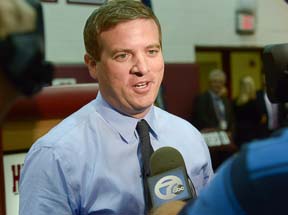 On first, our lead-off Educator for 2013–14 was English and language arts teacher (and assistant baseball coach) Mark Julien of Henry Ford II High in Sterling Heights, Michigan. Allstar assembly pitcher (and Senior Vice President of Milken Educator Awards) Dr. Jane Foley threw Mark a curve that initially stunned him. But with the support of his excited colleagues and heartfelt comments by Superintendent Dr. Christina M. Johns and students, Mark quickly regained his footing and hit it out of the park. Mark unknowningly uncovered our gameplan when he told the audience and cameras, "I feel overwhelmingly humbled. Something like this I'll probably spend the rest of my career trying to live up to." Don't take our word for it, watch the game-day highlights for yourself.

With that, we leave behind the baseball analogy as the notifications team travels to Milwaukee, Wisconsin. 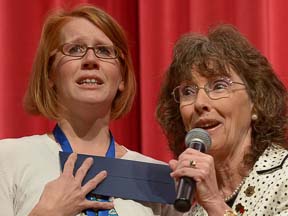 The following morning was Spanish and technology teacher Sarah Berndt's turn in the spotlight. Overwhelmed with emotion, Sarah had a few extra minutes to compose herself before speaking, because the entire auditorium of Reagan College Prep wouldn't stop applauding her. Sarah uses the format of the popular TV show "Shark Tank" to teach her students about the technology design process, but she never expected to be the star of her own show. In fact, as the school newspaper advisor told the swarm of reporters that surrounded her, never in her wildest dreams did she think she would be subject of the breaking news story they were covering. So what did Sarah think the assembly was about? Watch the video about the day she calls "the best day of my life" to find out.

Two new amazing educators were now inducted into the Milken Educator Network for 2013-14—and it was only Wednesday. 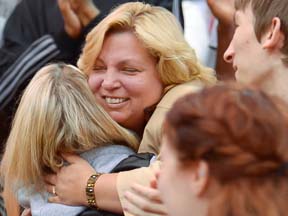 On Thursday, Dr. Foley and company traveled on to Fort Wayne, Indiana. When the cameras turned on our third honoree, Ginger Giessler quickly turned the spotlight from herself to her fellow educators and her students. Asked why she left a career in the corporate world to become a teacher, the New Tech Academy @ Wayne High School language arts teacher eloquently responded that working every day with great colleagues and seeing the successes of her students was a bigger gift than the financial rewards of business.

But wouldn't it be great if inspiring teachers didn't have to make that choice? That's one of the reasons why the Milken Family Foundation has awarded over $64 million to educators like Mark, Sarah and Ginger. We're happy to at least narrow the disparity in some small way and encourage their brightest students to pursue a rewarding career in education. And we're just getting started!

Don't miss sharing in the drama and excitement of recognizing outstanding educators around the country and changing their lives forever. See the photos, watch the videos and get the reactions: