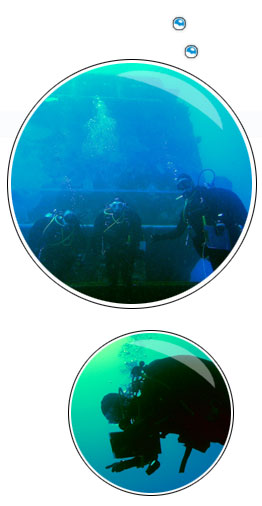 Above: The Aquarius Reef Base floats serenely in the ocean. Below: Tohulka is pictured here surveying the ocean for scientific data.

Mark Tohulka's (FL '01) high school marine biology course is often a day at the beach. At the Maritime and Science Technology Academy in Miami, Florida, his students are known to get their feet wet with projects such as a shark tagging study carried out jointly with the University of Miami. But in November 2008, he taught class from an especially aquatic location: the bottom of the ocean. Tohulka was selected to be the first Teacher Under The Sea in the world's only operating undersea laboratory, Aquarius Reef Base.

Owned by the National Oceanic and Atmospheric Administration (NOAA) and operated by the National Undersea Research Center at the University of North Carolina at Wilmington (UNCW), the station is designed to house up to six aquanauts, carrying out missions of up to two weeks on its reef location offshore from Key Largo, Florida. Operating in Key Largo since 1993, the Aquarius runs about eight missions per year, which vary in nature from scientific studies of coral reefs to training U.S. Navy divers to NASA astronauts.

When asked why living on the ocean bottom is necessary for certain types of research, Tohulka explains that surface diving, though more convenient, has distinct disadvantages to researchers. "To avoid the risk of decompression sickness, divers must endure long periods of gradual decompression, or more commonly, limit their stay underwater," he said. "By living in the Aquarius at a depth of 45 feet, however, we can dive to a maximum of 95 feet for up to six hours at a time— enough time to get a lot of work done— and we don't have to worry about decompression sickness." Compared to normal diving operations—where, typically, at a depth of 130 feet, time available is reduced to a scant five minutes—Tohulka's team can accomplish in a week the amount of work that might take over a month of normal surface diving. 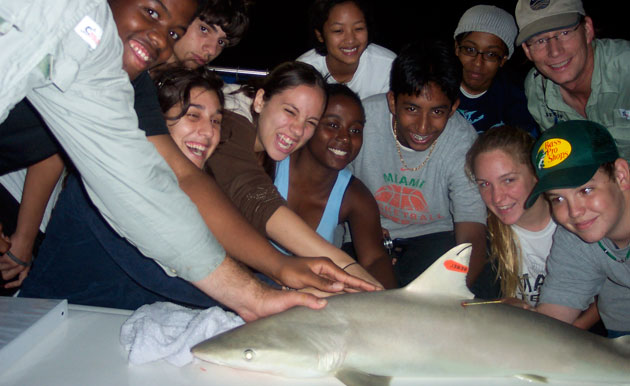 Tohulka's students at the Maritime and Science Technology Academy tagging a shark for their class's shark tagging study undertaken with the University of Miami.

Dr. James Lindholm of California State University at Monterey Bay designed the study in which Tohulka participated. The behavior patterns of reef fish were studied, helping to determine the size and habitat requirements of marine-protected areas. Mark worked with three of Dr. Lindholm's graduate students from out of the Aquarius, while Lindholm and a surface crew did work in shallow water. "Our tools were data sheets, a stopwatch, a clipboard and pencils, which work just fine with waterproof paper," Tohulka said. "Even erasers work underwater!" In addition to data collection, Tohulka's other task was to do broadcasts and outreach events with schools via the Internet, fielding questions from students and maintaining blogs about the mission and life underwater. 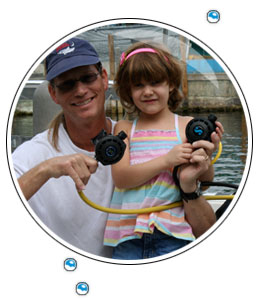 Tohulka shows his daughter some of the undersea equipment used to keep him safe while braving the ocean deep.

"Students asked a barrage of questions online, ranging from the basics of the study to how everyday things like cooking and hygiene are handled underwater," Tohulka says. One of the big undersea surprises concerned food. "Everything tastes bland, and when the basic staples are dehydrated camp foods, the taste can be less than appealing," Tohulka explained. One saving grace: Chocolate tastes great. "We had to work at consuming enough calories to make up for the heat loss and energy consumed by our work" Tohulka said. "I lost three pounds during the weeklong mission, but I gained a greater respect for the rigors of serious work underwater." When asked if he'd do it again, he responds, "in a second. It was truly a dream come true, and a rare opportunity to become a temporary resident of the ocean."

A virtual tour of the Aquarius, along with mission logs, archived broadcasts and photos, are available at the station's website, www.uncw.edu/aquarius

"Possessing fundamental skills in videography and content creation will be a huge asset for students beyond high school. Aside from having a creative vision, video production involves planning, problem-solving, critical thinking, collaboration and more. I don’t expect every student to be Steven Spielberg, but if they’re able to communicate effectively through video, it could open new opportunities for them down the road." — Spotlight: Adam Parvanta (ME '19) 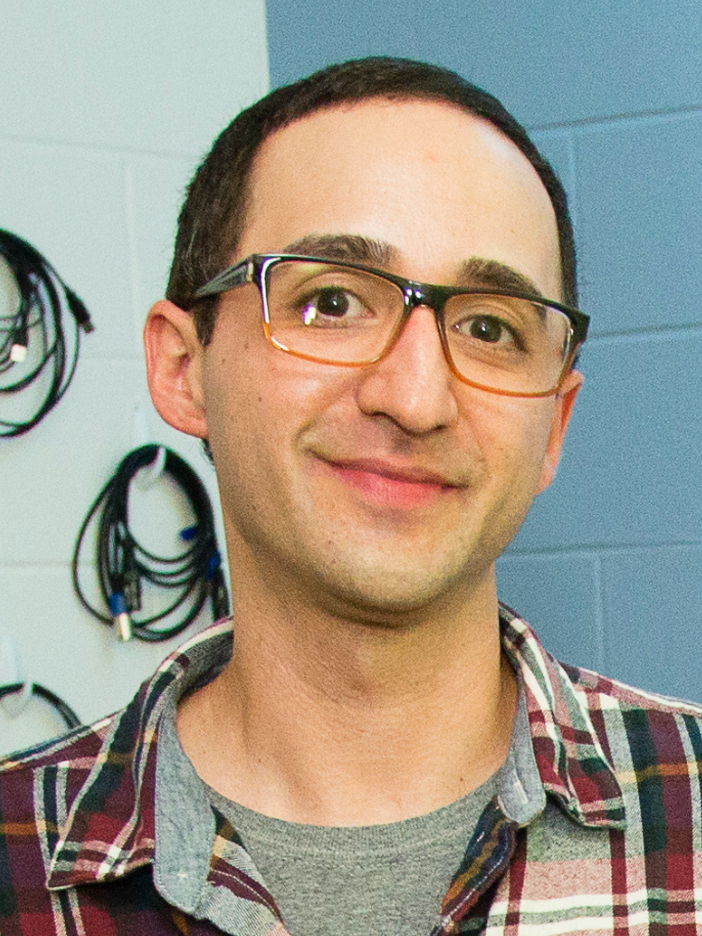