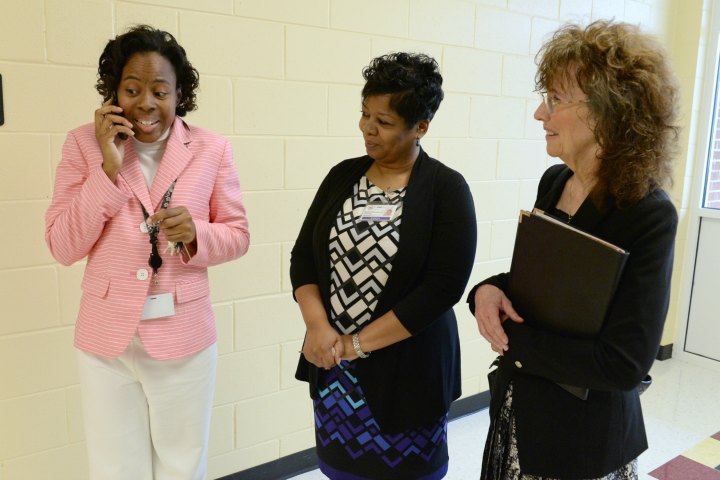 After Rhonda Burrage (MS '15) won the Milken Educator Award, a parent told Burrage that she and her son watch the teacher's notification video daily — at the student's request. Burrage received her Award at Magnolia Middle School in Meridian on January 20, 2016.

Rhonda Burrage: I have known that I wanted to become a math teacher since the seventh grade. My teacher asked me to come to the board and work out problems for the class, and she also selected me as a peer tutor for my classmates. I would help others with the concepts so that they could better understand what was being taught. During that time, I also tutored college students in algebra. Algebra was always my favorite concept in the broader math subject area. Throughout my middle and high school years, I had even more influential female math teachers, all of whom reinforced my decision to become a math teacher. My female math professors in college also confirmed my career choice.

Rhonda: I started tutoring college students in algebra and calculus when I was in high school, but those services were strictly volunteer; I simply wanted to help. The first paying job that I had was working as the math assistant at Meridian Community College (MCC). I would help the math instructors grade papers, print student progress reports, hold student conferences to assist with tutoring, maintain and clean the computer lab, and check roll. On occasion, I would hold classes until the instructor arrived. I taught two individual classes for a total of 50 minutes each. That was a learning experience.

Rhonda: I can remember all of my female math teachers from middle and high school. I attended West Lauderdale from kindergarten through 12th grade. In seventh grade, Mrs. Jeffrey Mayatt taught me Pre-Algebra. Mrs. Brenda Vance taught me Algebra I and Geometry. Mrs. Jane Cumberland taught me Algebra II. I remember all of these women, because my high school was a relatively small school located in the LCSD (Lauderdale County School District).

Rhonda: I graduated with my bachelor's degree in December 2003 and was looking for a job. I received my Praxis scores stating that I supposedly didn't pass. During that summer of 2004, a letter came in the mail stating that the Praxis exams were mis-graded. I was prepared to retake the Praxis, but it turns out that I passed the first time. There was a huge lawsuit over the mis-grading of the Praxis exams, but I just settled with the reimbursement of the cost of retaking the Praxis. I think it was around $400. I never retook it. As soon as I found out that I passed the first time, my mom and I drove all the way to Jackson to the MDE license office and stayed in the office until my license was ready. That was July of 2004.

My first year of teaching was at Northeast Middle School starting in August 2004. I was on a team of four teachers. I taught sixth-grade math. The other teachers on my team were also new to the profession, and we had one veteran teacher. I don't remember having a mentor teacher, but I quickly learned how to operate the grading system and daily routines by asking tons of questions. I visited the school each day and sat in the office to see what the daily routines were and to talk to the faculty and staff to get a head start.

I remember my first class clearly. It seemed that I was given the worst-behaved students. We had 50-minute periods and seven periods a day. My first period had five behavior problems, and I was not able to turn their behavior around. I had read about the "mutual respect" classrooms and had attended a discussion about how these classrooms operate. Apparently, there were not enough instructions about how to implement this theory. It was God's grace and mercy that brought me through that year, because I don't remember the middle of the year — only the beginning and the end. Middle school was a harder obstacle than I imagined.

My second year was a lot better. And I remember one student who told me that her favorite subject had been science until she took my class. I was the reason that her new favorite subject was math. That was very inspiring and uplifting. Nothing in my education classes prepared me for my first year of teaching. I learned everything I know through on-the-job training and being in the classroom on a daily basis.

Rhonda: I would tell any future educator that the profession needs more dedicated teachers. I would stress that teaching should be the person's calling, and not just a reason for "short" hours and paid summer vacations. Teaching takes time, both inside and outside of the classroom. That is why I put the word "short" in quotation marks. I arrive early at school, around 7 A.M., and don't usually leave until 5 P.M. I am either preparing lessons for the week or tutoring students who drop by after school for extra help. This career is heavily involved with paperwork and research. If a particular lesson doesn't work, or students don't understand, it is the teacher's responsibility to find another technique that works. This profession is hard work, and getting students to think on a deeper, critical level to successfully pass standardized tests is even harder. There may be several aspects of the teaching profession that may be unappealing, such as the pay, but when a student succeeds, remembers, and appreciates you years later, that is the true reward.

Rhonda: I think my students were truly proud to see that I received such a prestigious award. During parent-teacher conferences, one of my student's parents said that her son asks her to load the video on a daily basis, and they sit down together to watch it. He comes to class every day with a smile on his face and says enthusiastically, "Hello, Ms. Burrage." He said this before, but after the presentation, he has seemed even more excited.

MFF: What's your favorite time of the school day?

Rhonda: I would have to say that my favorite time of the school day is during fourth period (the lunch period). The math and language arts teachers have four block classes that last for about an hour and a half, and we have the lunch period off. That time is also our planning time, and sometimes we are in meetings; therefore, we have to plan after school most of the time. So, when we can actually sit down to check e-mail and our school mailboxes, this is our prime time to take a breather and get informed about the happenings around the school campus.

The second thing I would do with the money would be to buy theater curtains for our auditorium. At the present time, we have maroon curtains that have been there for a while. I have talked with my principal, and she would also like new curtains for the auditorium. I think a nice royal blue set of curtains would be great.

The fourth thing I would do with the money would be to hire six academic interventionists, two per grade level. These individuals would be enthusiastic, encouraging, and have knowledge about the curriculum and standards that should be taught at that particular grade level, so that students would want to attend the tutoring sessions and show growth.

The fifth thing would be to bring back the Accelerated Reader (AR) program. We are currently experiencing problems with the sixth-graders who are not reading enough at home. The Leadership Team was discussing ways that we can incorporate reading at home and hold the students accountable for the assignments.

I am probably out of money once I implement all of these things, but if there is any money left, I would give each teacher on my campus a few hundred dollars to spend any way they wish.

Rhonda: I would want my peers to say that I tried to reach every student that I taught, and that I was a fair, hard-working, dedicated teacher. I would hope that they would say that I was devoted to the teaching profession with no real thought of the pay in mind. I would want them to say that I was eager to learn new ways of teaching and helped fellow teachers learn. The main thing that I feel is important for every human being in every profession is to "share the knowledge." If you know the answer to a question that someone poses, it is your duty and obligation to share your knowledge and give an answer. I would want my peers to say that I had a brilliant mind, used my brain, and shared my knowledge with others.

Rhonda: I never had another profession in mind. I never had a minor in college. Secondary Mathematics Education was always my major. I feel that education is my true calling, and I wouldn't want to do anything else.

Rhonda: ...when I can achieve the same "A" rating in my Pre-Algebra classes as I have in my Algebra I classes. When I can have 70 percent or more of my students at proficient or advanced, I will finally exhale and breathe. I feel that I need to reflect more on my teaching practices and expand my teaching "toolbox" — it's been depleted this year, and I am out of ideas. I am trying to find anything that works. I don't feel pressured, but I do place a lot of emphasis and energy on trying to increase student success on standardized tests. I just want students to be prepared to enter their next grade level. I want students to leave my class with higher self-esteem and a feeling of success as a math student. 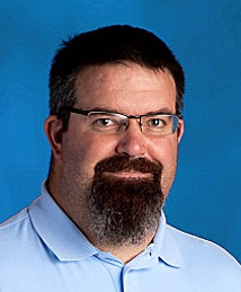