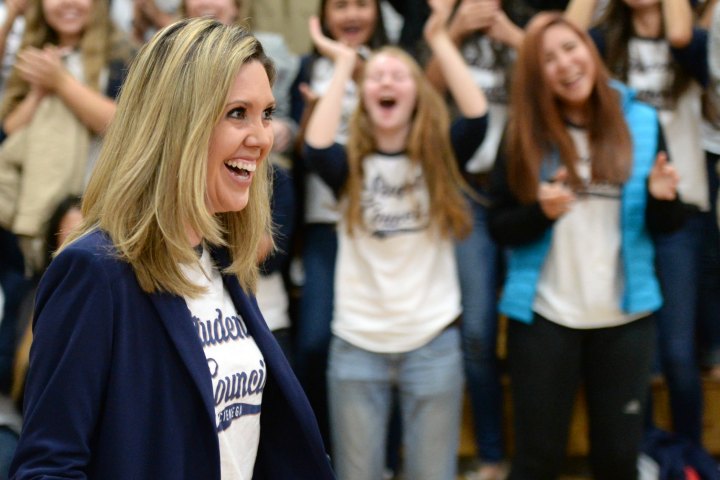 When Brittany Matsushino (AZ '15) became a Milken Educator, her students were almost more impressed by the recognition than the money. In fact, the surprise notification ceremony sparked meaningful classroom discussions about having a public image and being a role model. Matsushino received her Milken Educator Award at Cienega High School in Vail on November 16, 2015.

Brittany Matsushino: As the daughter of a colonel in the Marine Corps, I moved a lot while growing up. Teachers were always a constant and a source of support throughout the many changes in schools. I realized that certain teachers were truly in the field to help my peers and me discover who we wanted to become and what we would be capable of accomplishing. I knew that I wanted to help other teenagers experience the same.

Brittany: As a typical teenager, I did babysit when asked. I was never passionate about it. I've never been drawn to little children, but in high school I really enjoyed working with other youth in my church's youth group. Entering college I knew that education is where I wanted to be, but I could not narrow it down between history and English. I flip-flopped six times between those two content areas before settling on English. While volunteering in the Tempe school district, I was helping a young math teacher who was fighting cancer. She came to work every day cheerful, even if she did not have high energy. Not only did she teach the students, but she helped teach me how to assist them in their learning. I was in awe of her dedication and motivation to help these students who felt so defeated because they were in the remedial math class. I called my mom and left her a very energetically decisive voicemail that explained that after being there for one week, I knew without a shadow of doubt that I was meant to be teacher. Helping those sixth-graders find their "aha" moment was what I wanted to do for my career.

Brittany: There have been many teachers who made impacts and all for various reasons. To take one away would change a part of who I became. I remember every teacher's name and the top lesson that I learned from them; the lessons were not in any content area, but in humanity. Not every teacher taught me a positive lesson, but truly I've come to recognize that even the teachers I would prefer to overlook had substance and caused me to pause and reflect, which is inadvertent teaching.

Brittany: My first real class, where they were mine from the beginning of the school year, consisted of about 160 freshmen. They were the graduating class of 2013, and boy, did they have personality! They came confident, cocky, sure of themselves, ready to load on experiences even if they were not sure they were the smartest ones. I loved those students. That first day I explained that they would be mine until they graduated. Many of them thought that meant that I would be their teacher for four years, but I explained that I was invested in their graduation as much in the next three years as I was in this first year. What we were to learn from one another would continue throughout high school because learning is an evolution, not merely a single class occurrence.

In that year I would learn that there are parents who are just like mine: kind, supportive, involved, invested, and available. But I also learned that there are parents who are overwhelmed, suffering, uninterested, manipulative, and helicopter their child. Basically, every person has their own story, and I made it my job to try to assist in the balance. Many of my students that year were in the foster care system or came from families who were financially struggling. My own parents and I stocked a cabinet in my classroom with snacks, and a student could come to me and snag one if they needed it.

Bless that class for supporting a freshman teacher during their freshman year of high school. We were all green. Trying to fit in, find our way, become who we wanted to be and not what we'd always been. It was that class that supported me through the loss of my grandpa and whom I supported through multiple divorces, moves, deployments, surgeries, or typical teenage obstacles. That class has a very special place in my heart, and it has been wonderful to see them accomplishing so much whether it be by seeing them around Tucson, their publications, or when they come back to visit.

Brittany: This is such an amazing moment! I ask them what their motivation is for becoming a teacher. Anytime I have asked this question of a mentor or renowned educator, their answer has involved giving. This career is service-driven, although I don't feel it is looked at that way often enough. We are serving our communities by providing opportunities for learning in social and academic knowledge. We are serving as mentors, examples, and leaders. When they answer in a manner that tells me that they are wanting to serve, I know they are wanting to enter education for the right reasons.

Brittany: Many of my English students were not as "wowed" by the money as they were the attention that came with the award. They wanted to know what it was like to suddenly be a "little celebrity."  We had a couple of wonderful discussions about self-image versus public image and role models.

My Student Council students seemed to take away from it more that if you do work really hard because you know it is the right thing to do, there is a chance that one day you'll be acknowledged for that. Those students know more than most that I was so genuinely shocked and that although I'm so appreciative, I also know that there are many colleagues who could easily have been recognized that day. The students in Vanessa Romeo's and my StuCo class are all individuals who strive to make a positive impact during their lifetime in some manner. They are driven young men and women, and to see that someone like Mr. Milken can be so successful and recognize others for their contributions, that motivated many of my students to knuckle down even more, so that they too can achieve their dreams.

Brittany: I would build a proper auditorium with accompanying practice and warm-up rooms for our music and fine arts programs. Our school is completely full and those programs have achieved superior ratings while not being able to grow further due to lack of space. Those students are among the most dedicated on the entire campus and would be capable of additional growth and advancement in their skills if they had the room. As the band director's wife I have a bit more insight into the fine arts program than the average individual.

Brittany: What a difficult question to answer! I believe that one day I might be able to live up to one of these three messages:

Brittany: I would have become a neurosurgeon or neurologist to assist those who suffer with seizure disorders. Briefly, as a middle schooler, I suffered from seizures. Unlike so many, mine were resolved, first with medication and then with time (I grew out of them). I went to high school with an amazing young woman whose seizures began to dictate her world. It never seemed fair to me that mine were so easily solved and yet she had to deal with their constant uncertainty and severity. I'm thrilled to say that after multiple surgeries, she's now attending college and is living her life fantastically.

Brittany: When a student or colleague has gained confidence or the insight they were seeking because they have a firm understanding of a concept or strategy.

"To my students: You make every day coming to work a dream come true for me. This is what being a teacher is all about — not just a prize or an award, but seeing the satisfaction on your faces when you set those high goals and you reach those goals. Seeing you come back after a couple of years and showing me your acceptance letters to colleges, these great careers that you're going to start. And it begins here at Whittier [Middle School]." 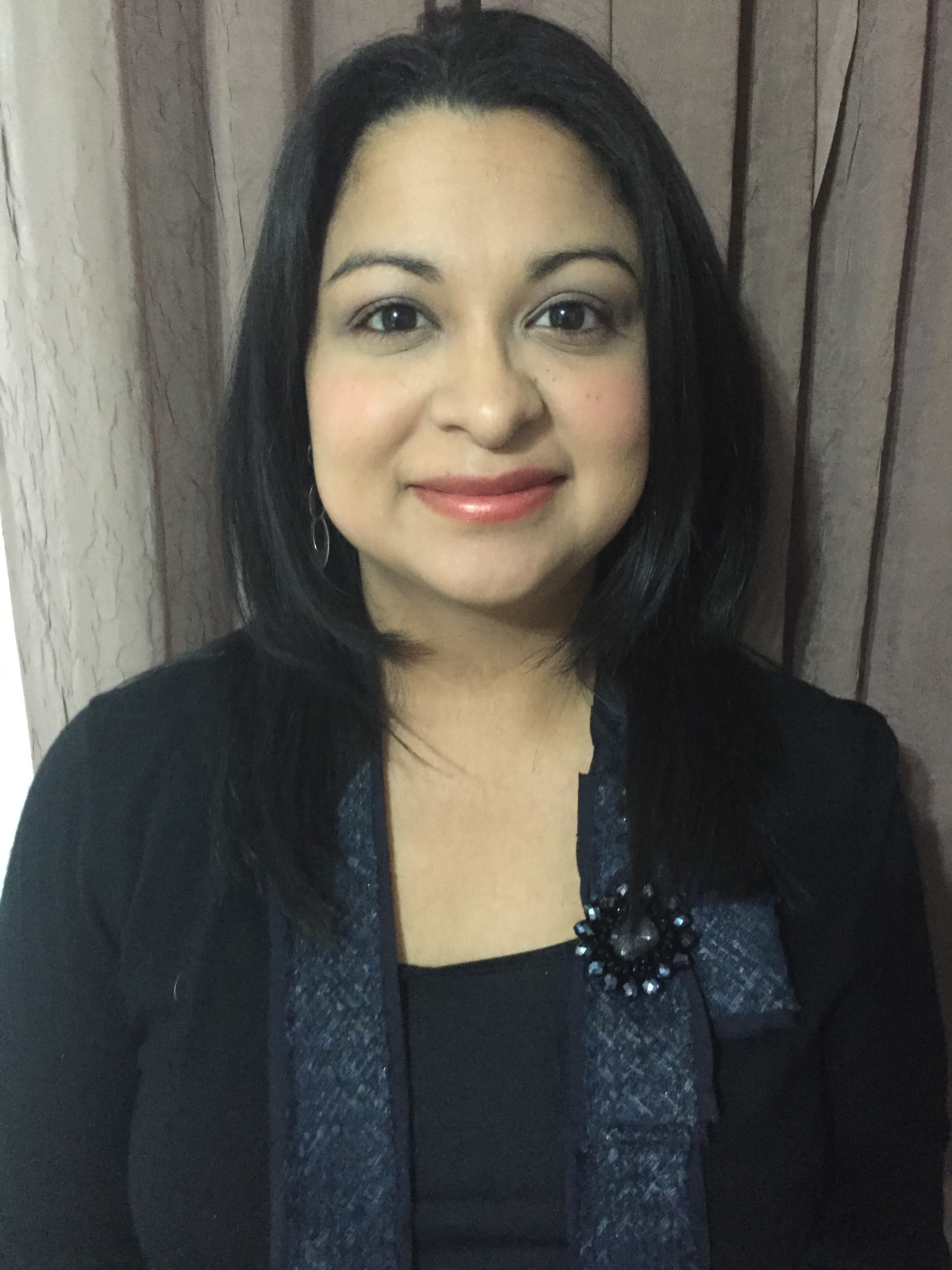