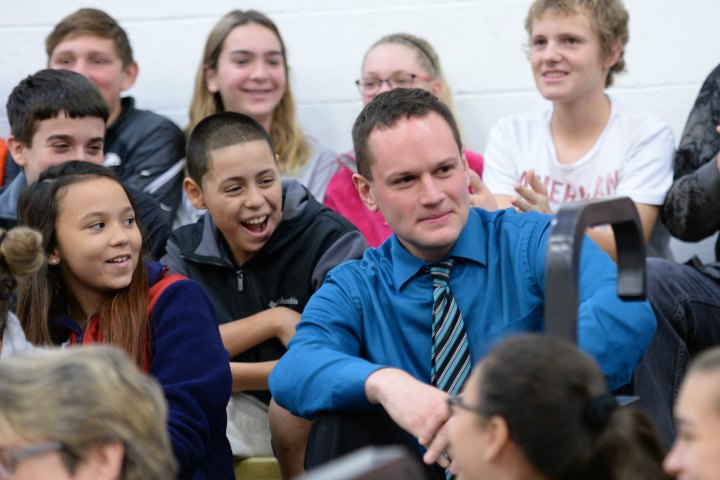 Working in a local grocery store during high school taught Anthony Angelini (PA '15) the value of pushing himself, making smart decisions and taking on responsibility. He received his Milken Educator Award at New Oxford Middle School on December 4, 2015.

Anthony Angelini: It was my experience working as a counselor at summer camp. Nothing can prepare a 19-year-old for seven weeks leading, learning from, and living with cabins full of children. During my six years as a staff member at Camp Crestfield, I found my passion for working with youth. I realized that in just six days and five nights, I could have an impact on a kid's life. When campers returned year after year, citing memories or lessons from past summers, I saw the power of "teaching." When I started looking around the staff table and recognizing the faces of former campers, now on staff in part due to my influence, I saw the impact of mentorship. I knew then that I wanted to work with children. In addition, camp gave me the confidence to face the challenges. After spending a whole week with a set of 12-year-olds, 24 hours each day, a 59-minute class period feels much more manageable.

MFF: What was your very first job?

Anthony: I learned responsibility at a store called "Slop 'n Slave." (To everyone not employed there, it was Shop 'n Save.) My parents were firm: no job, no driver's license, no car. So on my 16th birthday, I applied to be a cart-pusher. I was seen as a reliable employee. They trained me as a cashier months before friends who started at the same time. When I continued to excel, they promoted me to customer service. Eventually I became a front-end manager and cash office clerk. At 17, I was supervising adults and balancing registers valued over $60,000.  When I was about to graduate, the manager approached me about becoming an assistant manager. I was floored. For a teenager whose friends were worried about the disappointments of sports dreams and the dramas of relationships, I was amazed at how simple the work world seemed. Pushing hard, making smart decisions, and accepting responsibilities became virtues I recognized could open doors.

Anthony: I remember many past teachers each day. Often, the memories are triggered by my present responsibilities. When I am adapting a challenging text, I think of my Latin teacher, Magistra McCormick, who used countless clever tricks to annotate or modify readings. As I struggle to write meaningful assessments, I recall Mr. Green, a social studies teacher whose tests always pushed me.

But when I got the Milken Educator Award, it was Mrs. Sally Durrant whom I immediately wished I could call. After I graduated from high school, Mrs. Durrant was a constant support and source of advice as I worked through college and started my career. Just like when I was her student in government class, she never asked the simple questions. She did not want to know about my grades or my schedule or my readings. She shared her own experiences, talked about her proud moments and her regrets, and pushed me to consider how I might have acted in her place. After all, she said, she knew I would likely face the same difficult decisions eventually.

In the classroom, Mrs. Durrant stood out for many reasons the memorable teachers stick with us. She pushed us to statewide success in the "We the People" competition. She would dress up as Enlightenment philosophers to question us on interpretations of John Locke. She invited small groups of us to her home to polish our speeches. I cherish each of those memories and the lessons I learned through the experiences.

Yet what has made Mrs. Durrant stick with me was her aura of brilliance. In addition to her teaching and administration credentials, she was a lawyer. Despite an elderly appearance as a result of health concerns, her mind was remarkable even to the most oblivious teenagers. She was eloquent and expert on a range of issues. She truly seemed like a person who could have done anything. Yet there she was: an often overlooked teacher in a public high school. She invested all her capacity into her students. She spoke with passion. With her innate prestige, she imbued education with meaning. More than that, she instilled purpose within each of us. If someone like her thought we were worthy of her time and had the potential to improve the future, then certainly we were and we must.

When Dr. Jane Foley came to New Oxford Middle School, she shared the Award's mission that "The Future Belongs to the Educated." She described education as a field filled with unsung high achievers striving to improve the future for their students. Though the students of our school may have heard the message in the past, the gravitas brought by the ceremony elevated that message to a new level. In the presence of dignitaries, video cameras, and a big check, Dr. Foley's message struck a chord with our seventh- and eighth-graders.

Anthony: Almost any educator reflecting on their success likely begins by questioning if they even are successful. There are so many metrics, influences, critiques, and demands placed on teachers that it can be difficult to see success through the fog.

As a first-year educator, I sometimes thought success was simply the absence of calamity in the classroom. In the years afterward, success was about having lesson plans done in time or staying on top of the flood of feedback my students needed. Later, I considered success to be earning high marks on teacher evaluation rubrics or collecting praise from colleagues, parents, and supervisors.

Eventually, I came to realize none of those were indicators of success. They were signs of survival. It is unfortunate that it took me almost 10 years to recognize that, but I am confident — and distressed — that the same is true of most new teachers in the United States.

I know I'm succeeding as an educator in the rare moments when I glimpse my students succeeding as a result of the knowledge, skills, or attitudes developed in my classroom. A student who is able to apply a powerful theme from literature or history to a difficult decision in their life. A student who uses research and argument skills to support an important claim. A student who integrates perseverance, organization, or passion into their day-to-day life because they have realized its potential to improve outcomes.

Sometimes these glimpses are hard to catch, since they happen outside of our rooms and often outside of our influence. One of the most spectacular consequences of the Milken Educator Award so far has been the stories shared by former students and parents. When they heard about the Award, most used it as an opportunity to reflect on how they, or their child, grew in my classroom. They wrote of kids who are perhaps just a bit better prepared to be a part of the world. One student's note, in particular, stands out:

Congratulations on your award Mr. A! I remember you always pointed to that poster on your wall with the four characteristics needed for success. The one I remember the most is grit. Since I left your class, I have needed to have grit, to dig in and work hard, to succeed. I'm grateful I had you as a teacher, and I'm glad I was able to take some of the lessons you taught us with me to use throughout the rest of my life.

His note gave me chills when I first read it. And it still does.

"A high-quality education gets you into the Super Bowl of life. Without having an education, you’re listening to the game on the radio." 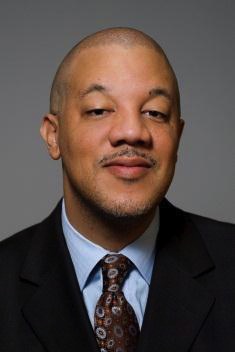