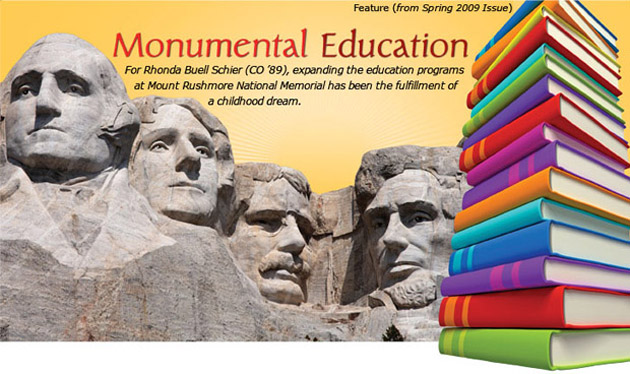 As a little girl growing up in Rapid City, South Dakota, Milken Educator Rhonda Buell Schier developed a great deal of respect and affection for the country's national parks — especially the one located practically in her backyard.

For more than three-quarters of a century, Mount Rushmore National Memorial has drawn millions of curious visitors from around the world. With the massive sculptures of four great presidents towering over the landscape, Mount Rushmore has long symbolized the grandeur of America and the watchful wisdom of its leaders while providing an excellent opportunity to learn about American history and democracy. 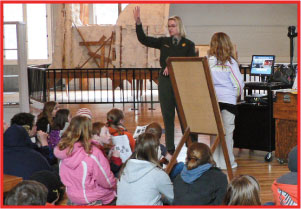 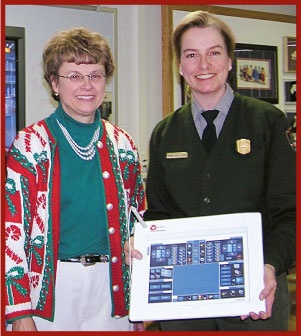 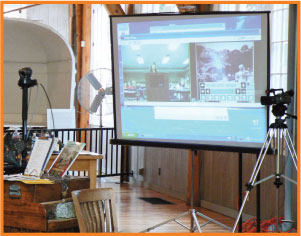 Schier grew up in this environment knowing there was something special about the memorial that attracted so much worldwide interest. When she graduated from the University of South Dakota, there were two things she wanted to be: an educator during the school year and a Mount Rushmore park ranger during the summer. Many years later, she got a chance to be both, year-round.

In January 2004, Schier became the education specialist for Mount Rushmore National Memorial, charged with expanding the park's education offerings. By then, she had been teaching in public schools for more than two decades, including 10 years in the Rapid City School District as an elementary and middle school computer teacher and a district instructional technology specialist.

"This was an opportunity to be a teacher, but in a much larger classroom," she said.

Much larger indeed. In addition to almost three million people from around the world who visit the park each year, the distance learning programs that Schier helped develop over the next several years increased her audience to schools, museums and conferences nationwide and beyond.

When Schier began her work at Mount Rushmore, the park's main education outreach consisted of its Rangers in the Classroom program, in which park rangers visit classrooms throughout the Black Hills region, teaching students about the memorial and the four presidents enshrined there, as well as local, state and national history. The park's education program also included a video conferencing component, but in a limited capacity.

Over the next five years, Schier aligned the park's educational program to state curriculum standards and applied her technological expertise to broadening the scope of the park's education outreach. She acquired a portable video conferencing system to complement the stationary system that the park had been using. The portable system allows Schier and her staff to conduct interactive video conferencing sessions from places such as the park's Sculptor's Studio, enabling students and teachers from across the country to view historic artifacts and workers' tools used in creating the memorial — such as artist Gutzon Borglum's plaster model of the sculpture. At the same time, online visitors can listen to Schier or a fellow ranger discuss and interpret the history and significance of what's being shown. 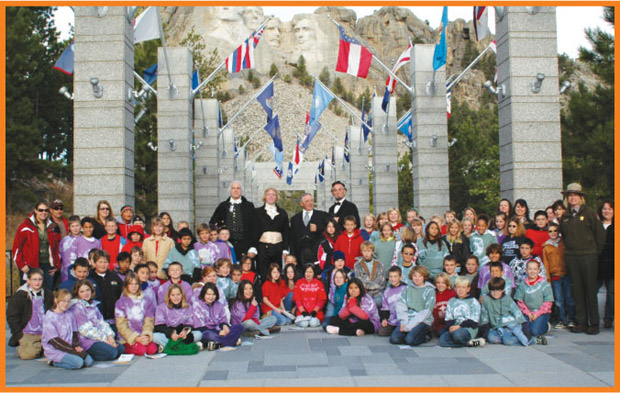 Schier (at far right) with students from Rapid Valley Elementary School, teacher participants in the Mountains of History Institute 2.0, and, in the back row, George Washington, Thomas Jefferson, Theodore Roosevelt and Abraham Lincoln

Schier also expanded the park's adult education program, the centerpiece of which is the annual Mountains of History Teacher Institute. Funded through a Teaching American History grant from the U.S. Department of Education, the Institute offers a one- to three-year graduate-level professional development experience for teacher historians. It combines on-site field studies at both the Mount Rushmore and Crazy Horse Memorials with a research project and field trips to historic sites such as Little Bighorn Battlefield National Monument and Fort Laramie. The purpose of the Institute is to arm teachers with strategies for using primary source documents and visits to historic sites to improve their teaching of history.

Other Institute partners include Black Hills State University, Technology and Innovations in Education (TIE), Crazy Horse Memorial and the Chiesman Center for Democracy's Institute for Educational Leadership and Evaluation, which conducts Mountains of History's teacher, student and session assessments. 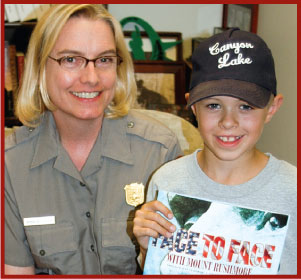 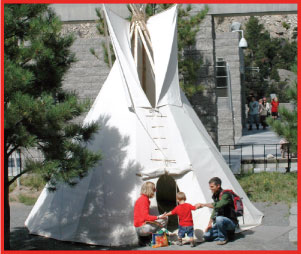 Top to bottom: Schier with Drew Messer, whose question at age three ("Why are those guys up there?") prompted author Jean Patrick to write the book Face to Face with Mount Rushmore; a tipi at the memorial, in honor of the Native Americans' ancestral homeland.

According to a comparative study conducted by one of the park's partnering organizations, students whose teachers had participated in the Mountains of History Teacher Institute experienced significantly higher achievement scores, improved historical thinking skills and increased interest in history. Now in its second phase, the Institute has added several online learning modules, such as the ones focusing this year on George Washington and Thomas Jefferson. During these modules, Schier facilitates discussions and helps teachers locate and analyze resources, from the digitized historic documents at the Library of Congress to Web-based resources at Monticello and the University of Virginia. Because the technology allows teacher historians to participate in the Institute without leaving home, the online component has helped double enrollment and expand the Institute's reach beyond the Black Hills area to teachers from across the state.

In addition to the new programs Schier has fostered, she has helped expand the park's Rangers in the Classroom program. Rangers now visit hundreds of classrooms each year, delivering standards-based multimedia presentations and engaging students in hands-on activities covering a wide range of topics, from art appreciation to the culture of the Lakota Indians. Schier visits these classrooms herself, observing, coaching and mentoring teachers and rangers through modeled lessons, written feedback and individual conferences.

During her time at Mount Rushmore, Schier has served on two occasions as the acting chief of interpretation, heading the park's entire Department of Education and Interpretation. (The National Park Service uses the term "interpretation" for its process of helping visitors make meaningful intellectual and emotional connections to the memorial.) Even now, 20 years after receiving her Milken Educator Award, Schier continues to educate at a high level of excellence, combining expert pedagogy with a passion for her subject, a passion she has had since childhood and which has clearly not diminished over the years.

"When I was growing up, one of the things that made me appreciate the memorial was knowing how much it meant to the visitors who came to see it," said Schier. "Even now, it amazes me to see them come in awe of the place and say that it has always been a dream of theirs to see Mount Rushmore. It really is one of America's special places."

Schier (center) with a film crew for The Untold Stories Project, which will accompany the upcoming Ken Burns documentary, The National Parks: America’s Best Idea. 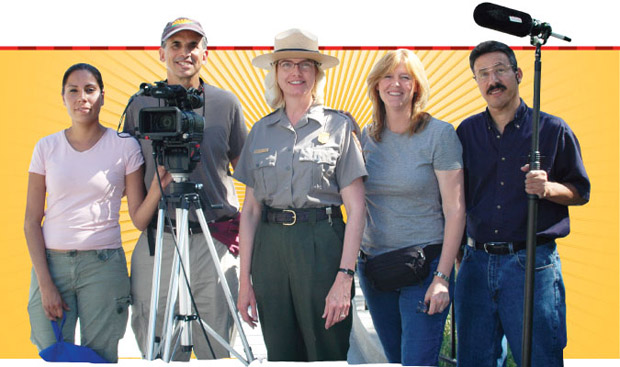 "As educators, we welcome the whole child each and every day, and the whole child's life doesn't just take place in the bubble of a school building. Educators need to recognize everything that makes their students who they are (both inside and outside of their classrooms) and commit to being fierce advocates for their students, doing all they can to ensure an equitable educational experience for every child." — 'We Are the Voice for Our Profession': Milken Awardees on How Teachers Can Lead, Education Week 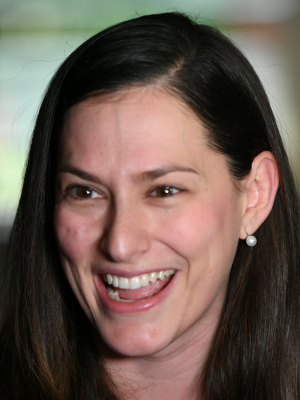