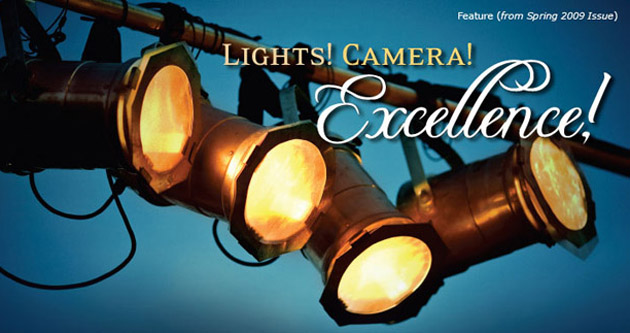 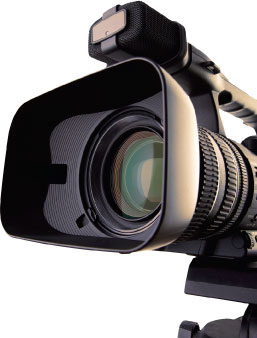 From a small after-school club to six classes a day and over 250 top awards, Jeff Rudkin's (IN '07) video production program has grown into a national model of excellence.

On January 27, 2005, thousands of people from around the world gathered in Poland to observe the 60th anniversary of the liberation of Auschwitz. The historical significance of the event drew widespread media coverage, and organizers had set up an exclusive press area where journalists could do their work.

That morning, four American middle school students and their teacher — Milken Educator Jeff Rudkin — boarded the bus in Poland that had been chartered to take reporters to the exclusive press area. The young students were met with puzzled looks from dozens of professional journalists. They were told that the bus was for credentialed press only. And so the students presented their credentials.

They were there representing B-TV, the video production program at Lora L. Batchelor Middle School in Bloomington, Indiana. Their credentials had been sponsored by the Bloomington Herald-Times and approved by the Polish Embassy. They were the only student journalists allowed in the press area that day, and by the end of the event they were chatting with adult reporters from Fox News as if they'd been long-time colleagues.

Over its 14-year history, B-TV has grown into a nationally recognized, award-winning program, with Rudkin and his students winning over 250 honors at local, state, national and international media festivals and competitions. They have twice been honored with resolutions by the Indiana State Legislature, and the program has earned hundreds of thousands of dollars in grants. 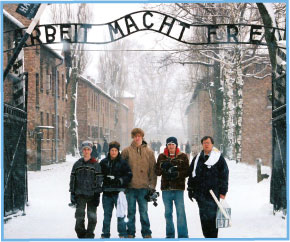 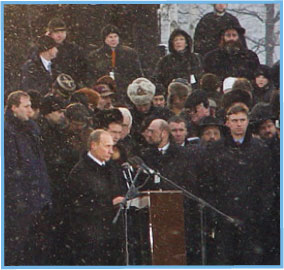 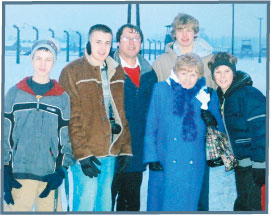 From the 2005 trip to Poland (clockwise, from top left): Jeff Rudkin (right) with four of his students at the Auschwitz gate; Russian President Vladimir Putin at the 60th anniversary of the liberation of Auschwitz, in a photo taken by one of Rudkin’s students; Jeff Rudkin (third from left) and Holocaust survivor Eva Mozes Kor (second from right) with four B-TV students in Poland
Photos courtesy of Jeff Rudkin

Like many big things, B-TV had a relatively small beginning. Rudkin was in his fourth year of teaching at Batchelor in 1995 when he started it as an after-school club. Back then, the club's only equipment was Rudkin's own personal camcorder and a primitive editing system comprised of two interconnected videocassette recorders. Student productions focused mainly on covering Batchelor's sporting events and concerts, which they broadcast on a local cable access channel. They also produced a video yearbook and a video news magazine.

During that first year, membership in the club grew from 15 to 40 students. The following year, Rudkin taught video production as a class for the first time, offering it as a humanities elective for a small group of mainly gifted and talented eighth graders. Meanwhile, the after-school club continued to grow, tripling its ranks to about 120 students, and the district and community began providing grants for new equipment such as better-quality cameras, tripods and a mixing board for more efficient editing.

In the program's fourth year, Rudkin was blessed with a group of seventh graders he described as "real go-getters." They were ambitious and motivated, and even wore ties during newscasts. They entered a state competition called the Association for Indiana Media Educators (AIME) Media Fair and won fifth in the state.

It was a worthy achievement. But during the trip home Rudkin's students were dejected because they hadn't won the top prize. They resolved that day to win first place the following year at both the state and national levels.

During the summer and in the months that followed, Rudkin's students worked tirelessly on a 10-minute video adaptation of Washington Irving's The Legend of Sleepy Hollow. They donned period costumes donated by parents and filmed their scenes at nearby Pioneer Village. On one particularly ice-cold day, students spent five hours in a barn reshooting several scenes that had left them unsatisfied in the editing room.

True to their word, Rudkin's students won the state Media Fair competition that year with their Sleepy Hollow project and went on to win a national award in the Live Action Video: Drama category at the Association for Educational Communications and Technology (AECT) International Student Media Festival. For this last honor, Rudkin was able to take 36 of his students to Atlanta, Georgia, for the awards ceremony.

"They achieved the goal that they had set," said Rudkin. "Not many kids can make a lofty goal like that and actually pull it off."

That year, Rudkin said, "the program just transformed." Membership rose to an all-time high and student projects became more ambitious and sophisticated. Rudkin's students began producing feature-length cinematic interpretations of classic literature such as The Adventures of Tom Sawyer, Frankenstein and Oliver Twist. They also began writing and filming original screenplays, and some of the students began working on documentaries.

One documentary project concerned a Holocaust survivor living in Terre Haute named Eva Mozes Kor, who had survived Auschwitz and was now speaking about her experiences at schools throughout the region. After interviewing Kor over a 90-minute session, Rudkin's students were fascinated by the subject and wanted to interview as many other survivors as they could find.

The resulting 20-minute film not only won numerous awards at festivals, but also initiated what became one of B-TV's most impressive and comprehensive projects: a documentary series on World War II. They conducted over 60 interviews with World War II veterans, Holocaust survivors and many others who had stories to relate about their experiences during the war.

It was in the early stages of this project that Rudkin received an invitation from Kor to take several of his students with her to Poland for the 60th anniversary of the liberation of Auschwitz.

With enthusiastic backing by his principal and the school board president, Rudkin and four of his students acquired passports and filed a request with the Polish Embassy to provide the students with press credentials. They traveled to Poland not knowing whether the Embassy would approve their request, and it was not until the day before the event — minutes before the embassy's closing time — that Rudkin and his students learned that their request had been approved.

"It was an incredible experience," said Rudkin. "The students got to see world leaders up close. And not only did they learn about the Holocaust, but they learned about being part of the international press. They came away with some remarkable pictures, and in the four to five days we were there, they came away with something like 14 hours of footage."

It was also unforgettable for students to be at Auschwitz with an actual survivor, who was able to show them where her experiences had taken place.

"It was very moving," said Rudkin.

Much of the footage from Poland ended up in the final project: a six-part, nine-hour documentary miniseries called World War II: A Time for Heroes. The program was accompanied by a 270-page book containing biographies of the interview subjects as well as historical research essays, all written by B-TV students. Both the documentary and book were sold nationally, and one of the six DVDs — the segment on the Holocaust — was selected by the Indiana Department of Education to be distributed as a learning resource to every middle school in the state that wanted a copy. Over 100 schools requested the disc, and B-TV continues to receive requests for both the video and the book from schools as well as veterans' groups.

B-TV students' successes did not end there. Their projects continued to win prestigious grants and awards. They began participating annually in C-SPAN's StudentCam competition, winning top prizes for their documentaries, which are required to show both sides of a current issue. In 2003, B-TV received a Community Alliances to Promote Education (CAPE) grant, allowing them to purchase more high-end equipment. Five students won a brand new iMac computer for being the national middle school winners in the National School Boards Association (SBA) Classroom MovieFest sponsored by Apple Computer, Inc. And in 2008, B-TV won the Best Buy Teach Award at both the state and national levels, allowing the program to significantly upgrade its technological resources while providing equipment for every other school in the district as well. 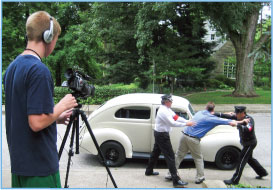 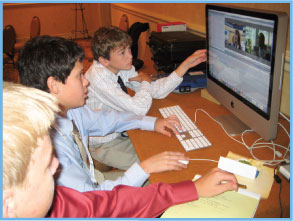 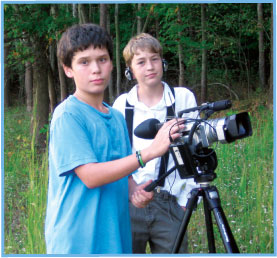 In addition to the program's many awards, one of the things that Rudkin appreciates about B-TV is the diversity of students it serves.

"We have a huge range of diversity in terms of talent, ability and student backgrounds," he said. "We have a lot of gifted and talented students in our program, but we also have a significant number of special needs students. I've had autistic students, students with Tourette's Syndrome, a blind student, students with hearing difficulties—and they're all able to come in here and be successful. And that's the beauty of the program: watching students of multiple backgrounds and multiple ability levels come together to produce a project."

Rudkin now teaches six video production classes a day, in addition to coordinating the after-school club. Several of Rudkin's former students have gone on to study communications in college or are working in entertainment-related careers. One is now a cameraman for one of the major TV networks. Several students are enrolled in the telecommunications programs at Indiana University and Ball State University, and one Ball State graduate now serves as the university's certified instructor for Apple technology. And a former student who learned photography at B-TV is now a magazine photographer in New Zealand.

"He never imagined when he was here that he would ever use what he was learning," said Rudkin. "And now it's his livelihood."

Among B-TV's most recent triumphs is the inclusion of two student films in the 2009 Kids First! Film Festival, a highly selective national competition. One of the films, Sod Hagibor: Secret of a Hero, tells the story of how boxer Max Schmeling had hidden two Jewish children during Kristallnacht and helped them escape the country before he was drafted into the Luftwaffe. Developed from the students' own research, the film has already won several top honors at national film festivals (click here to view the film on YouTube). The other B-TV film included in the Kids First! festival is a documentary on the wreckage of what is believed to be the Quedagh Merchant, of which Captain William Kidd was once the captain. When National Geographic secured rights to use the undersea footage of the wreckage, B-TV was the only other organization allowed to use the footage.

When looking back at the evolution of B-TV, Rudkin recalls his past experience as a wrestling coach.

"You could have fantastic teams that go undefeated, and then the next year the bottom could fall out," he said. "But with B-TV, the progression has been steady. They haven't allowed it to slip. The students, parents and the community have a lot of pride in the program, and they just keep trying to push it to higher levels all the time."

As an educator, Rudkin is particularly proud of the fact that he does not formally require any of the students in his video production classes to devote any time outside of class on their projects. But they do it anyway.

"Nearly every evening and on weekends I've got students working here in the lab," he said. "There was one evening when I came down here and there were 72 kids who had stayed after school to work on projects. You know they're enjoying learning when they're doing that." 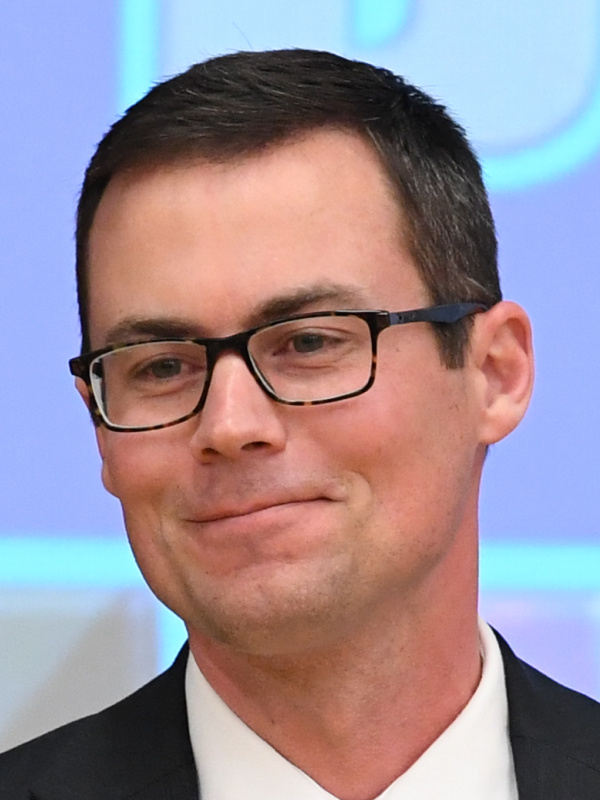