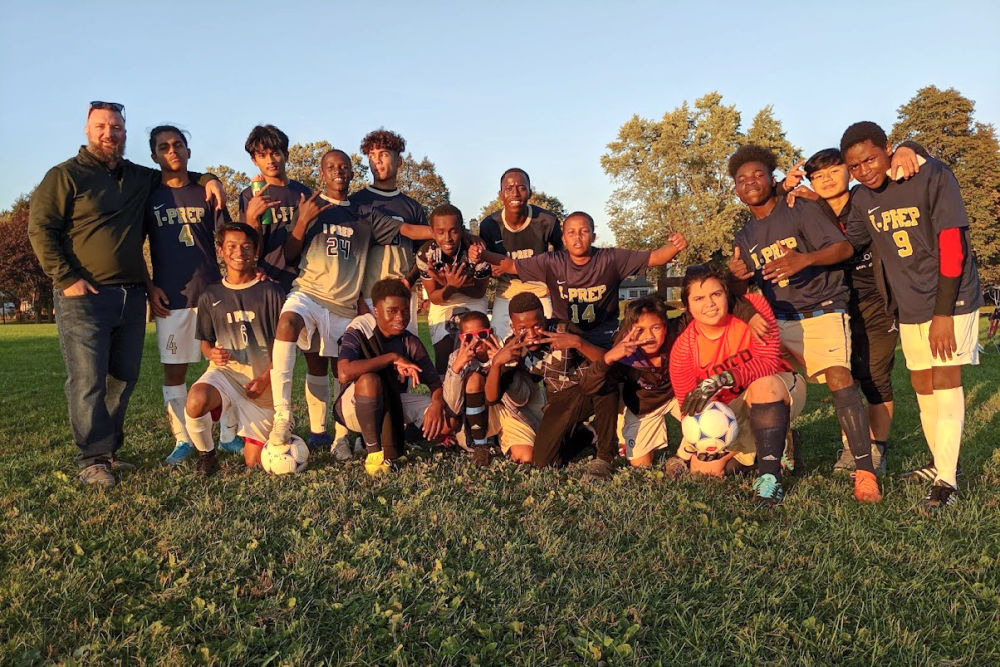 As the U.S. exits Afghanistan after 20 years, thousands of Afghan families eligible to resettle here are arriving on our shores to start new lives in America. We asked Milken Educators to share their experiences working with refugee students and families. Here are their tips for helping these new arrivals succeed and thrive.

All children deserve to have their name pronounced correctly. “Understanding a child's name as they like it to be pronounced is a concrete way to show our appreciation of who they are,” says Chris Bessonette (WY ’18), who teaches dual-language immersion second grade at Munger Mountain Elementary School in Jackson, Wyoming. He begins the year with “Teach Us Your Name” by Huda Essa, a book that celebrates inclusion via the diversity of names from different cultures. Of course, don’t proclaim non-English names “too hard” or give these new students Americanized nicknames—it may take a few tries, but encourage everyone in the class to make the effort to get it right.

You may not get a lot of information right away about your new student, but keep trying. When a student first arrives in his classroom, Chris Bessonette may only know what country the new student is from and what language they speak. But ultimately, he says, he tries to fill in the gaps. Was the student’s schooling interrupted? Is the child a high achiever in their first language? What strengths will the student bring to the class? He also prioritizes assessing the child’s English language understanding so he can provide the best language support to access challenging material. The heart of the challenge, adds Chris, is providing extra compassion and support without lowering expectations or treating the newcomer differently.

Munger Mountain has welcomed many undocumented students and asylum seekers, including children who have been separated from their parents at the U.S.-Mexico border and have witnessed significant trauma in their homelands. “Spend extra time building relationships with these students and their families—time together, compassion and smiles translate across many barriers,” says Chris Bessonette. The key to smoothing students’ transitions, he says, is understanding each child as a complex individual with stories, strengths, gaps, traumas, etc., rather than as a stereotype.

Andrew Franz (NY ’17), who teaches special education at The International Preparatory School in Buffalo, New York, agrees. “Socially and emotionally, immigrant students need their teachers to be patient, kind, understanding, willing to listen, normalizing, and caring,” he says. “The reason a student is no longer in the country that they were born in is usually something horrific or terrible.”

In addition to his classroom work at school, where half the students come from outside the U.S., Andrew coaches soccer, with an all-immigrant team that includes kids from Thailand, Burma, Tunisia, Ethiopia, Iraq, Iran, and Sudan. Many of these children “have baggage and trauma that they don’t even realize,” says Andrew. “I have had the nicest kids blow up out of nowhere. In decompressing conversations after the outburst, I discovered that there had been a triggering event bringing memories of past (but recent) trauma. That student is not going to behave in the classroom. If you’re teaching that student, just have patience. Listen.  More likely than not, they have seen something so traumatizing, so unimaginable that they will need all the support they can get.”

Chris Bessonette builds compassion in his classroom community by reminding the whole class that welcoming new students is a shared responsibility. He often asks an outgoing and friendly student to be the newcomer’s special buddy for a while. The one-on-one relationship gives the new student a friendly anchor as they settle in. “These kids are learning so much,” Chris says. “They’re figuring out how school works, how friends treat each other, a new language, hundreds of unexplained social rules embedded within the culture of their new community. Having a special friend helps them realize they’re not alone.”

It’s even better when the buddy speaks the newcomer’s language. When Nadia, a new student from Egypt, walked into the middle school science classroom of Robert O’Donnell (NJ ’13) at P.S. 28 in Jersey City, New Jersey, she knew no English at all. “Fortunately, Jersey City is one of the most diverse cities in the country, and we had Mohammed,” says Robert. Mohammed, whose family had arrived from Syria a few years earlier, quickly jumped in as Nadia’s translator, helping “Mr. O’D” and the entire class come together to welcome her and make her first American school experience a memorable one. “Watching Mohammed willingly take on the responsibility of assisting Nadia in translation was a beautiful thing,” says Robert.  Within a week, Nadia left her mark on the classroom, painting her teacher’s name in Arabic in a red rectangle on the classroom wall. 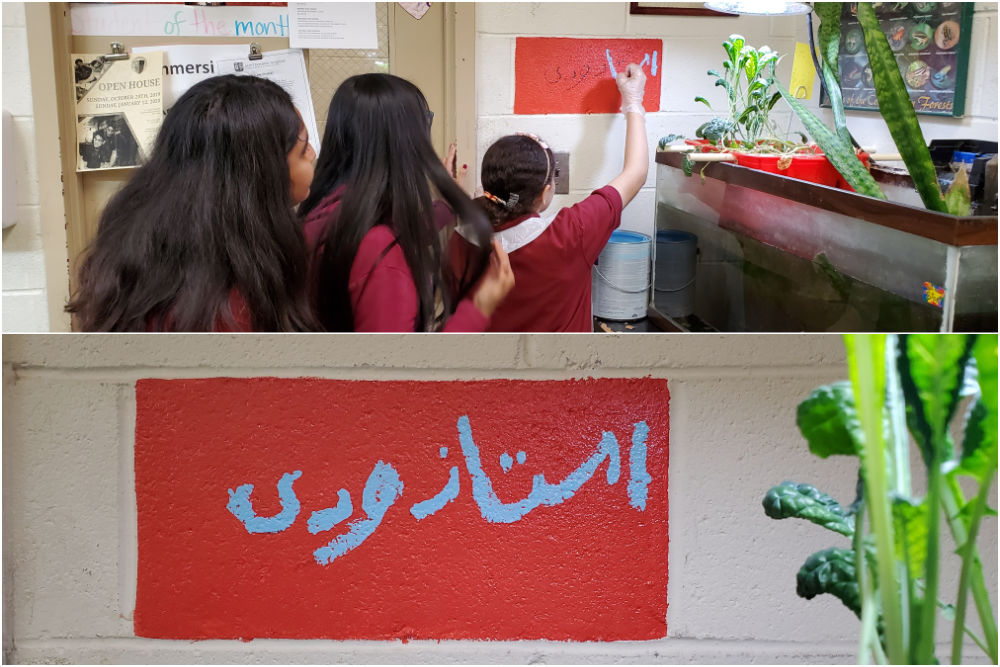 Google Translate offers an immediate communication channel that involves the entire class. Not only can it help new students make themselves understood, but it gives English speakers the chance to speak the newcomers’ language, too. “It’s critically important to make the new student smile,” says Robert O’Donnell, who projects Google Translate on the screen for the entire class. “What’s more welcoming than seeing their teacher and new friends attempting to speak their language? It puts everyone at ease and establishes common ground as everyone struggles to achieve mutual understanding, in any way possible.”

Source academic resources in their language.

Content resources in the newcomers’ native languages let students keep learning even as they build their English language skills. Nadia eventually transferred to another school in the district to work with an Arabic-speaking ESL teacher, but before she left, Robert was determined to find science texts in Arabic. A district colleague, it turned out, was working with a nonprofit to create science resources in Arabic, which Robert has added to his classroom library.

It may take more time, resources and help to communicate, but find a connection with these new students, just as you would with any student, counsels Robert O’Donnell. When Mohammed first arrived from Syria in 2016, he and Mr. O’D discovered a shared love of professional soccer—something they still talk about today via social media. “You don’t need a common language for the student to understand that this new adult in front of them truly cares about them, starting on day one, and each day that follows,” says Robert. Adds Andrew Franz: “Soccer is a universal language!”

“If a new family is in immediate need, the school community will do what a school community always does—it will take care of its kids,” says Robert O’Donnell. Families will rally around bake sales, plant sales, clothing drives, art shows, car washes, and casual dress days to raise money or collect items for new families. “When Mohammed’s family arrived in the U.S., they connected with a local religious group to assist in their transition to the country,” says Robert. “That same group went on to work with Mohammed’s mother to produce a cookbook, “The Bread and Salt Between Us: Recipes and Stories from a Syrian Refugee’s Kitchen.”

Your primary responsibility is the student in your own classroom, but keeping sibling and family connections strong helps everyone succeed. If the student has younger siblings at the school, Robert O’Donnell suggests arranging classroom visits so the little ones can see the resources and educators that await them in the future. Beyond the classroom, connecting new families with school counselors, social services and community members who speak the same language can support families as they settle into their new home. “Get the whole family excited to be part of your school community,” says Robert.

"Science, technology, engineering and mathematics are absolutely critical components within the framework of curriculum for 21st-century students. Using digital communication tools and applying problem-solving strategies are aspects of modern education which cannot be ignored. I always tell my students that the skills they are learning today will no doubt help them to solve the problems of tomorrow." 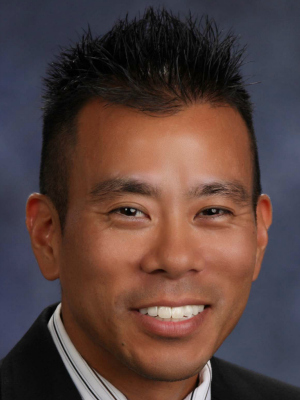