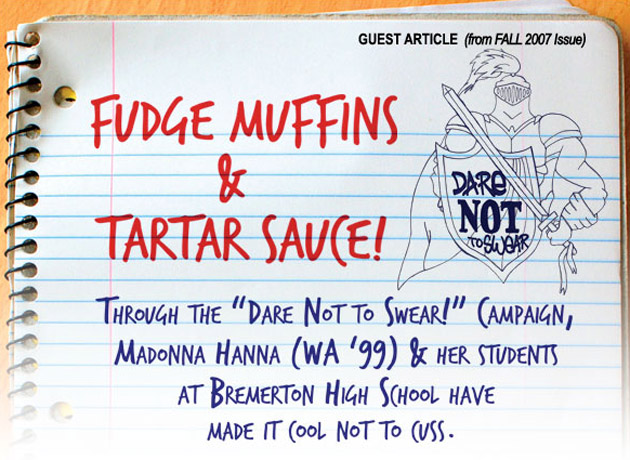 Go to just about any high school or shopping mall in the country and listen to teens talking around you, and you are likely to hear a shocking level of profanity that would earn a movie an "R" rating.

But not at Bremerton High School in Bremerton, Washington — a typical American high school in many ways, but with a curious and refreshing difference. The students' speech is as clean as a Mt. Rainier stream, unsullied by swearing, uncluttered with cusswords.

What's remarkable is that this phenomenon originated not from some heavy-handed, top-down mandate by a touchy teacher or austere administrator, but from the students themselves. In 2006, members of Milken Educator Madonna Hanna's (WA '99) advanced fashion marketing class at Bremerton created a schoolwide anti-swearing campaign called "Dare Not to Swear!" aimed at curbing some of the rampant profanity they heard every day around campus. What they were hoping for was a little cooperation from like-minded schoolmates. What they got — unexpectedly — was a bandwagon.

Not swearing at Bremerton is more than a policy. It's a craze. 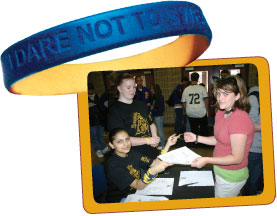 Bremerton High students help a schoolmate sign up for “Dare Not to Swear!”

During the 2005-2006 school year, the Bremerton School District's behavioral committee created a motto to help guide students and staff toward more positive behavior: Respect, responsibility and safety is the Knight way.

As a member of that committee, Madonna Hanna posed a challenge to the students in her advanced fashion marketing class: How could they promote the new motto throughout the district? One idea was to conduct a survey, asking students, parents and staff, "What do respect, responsibility and safety mean to you?" When the results of the survey came back, two issues dominated. One was attendance. The other, surprisingly, was swearing.

Sensing a public need, Madonna's students decided to build a marketing campaign around this unexpected hot-button issue.They called the campaign, "Dare Not to Swear!" and requested $1,000 from the principal and district superintendent for 1,000 blue-and-gold rubber wristbands bearing the words, "I Dare Not to Swear!" The purpose of the wristbands, explained the students, was threefold: to remind students not to swear, to inform the community that the problem of swearing was being addressed, and to provide an incentive for students to sign up for the program.

Administrators enthusiastically approved the expense. But by then the school year was coming to a close — there was no time left to implement the campaign. It was up to the following year's students to carry on the cause.

On a Thursday afternoon in October 2006, the nine new students in Madonna's advanced fashion marketing class were ready to kick off "Dare Not to Swear!" Building on the work done by the previous year's students, the new team had spent part of September creating a yearlong plan. Now they were ready to put the plan into effect. Earlier in the day, they had set up tables where students could come to sign up for the campaign. Reporters from two local television stations were on their way to cover the event. Madonna dismissed her students from class five minutes early so they could be at the tables to greet interested schoolmates.

When they arrived at the tables, they were surprised to find a line already forming. Within the first ten minutes, there were 40 names on the signup sheet.

Then came the flood.

One by one, Bremerton students came to the tables, signing their names and asking questions. Some asked if there would be T-shirts for sale. The marketing students hadn't included T-shirts in their plan, but one enterprising student dashed back to the classroom, improvised an order form and dashed back to the tables. Other students asked what they could say in place of common swear words. That was another unexpected question, for which Madonna's students knew they had to find an answer. Madonna herself went back and forth between the tables and her classroom to replenish her students' supply of pledge forms. Meanwhile reporters from the Bremerton Patriot and the Kitsap Sun asked students why they were joining the cause. Many said they saw it as an opportunity to make a positive change in their lives.

Within one hour, 500 students had signed up — half of Bremerton High's entire student body. Eighty-three had ordered T-shirts.

"We should have known because we were following the information from the survey," said Madonna. "But when we put this project together, we had no idea that 500 kids would sign up in an hour."

That was just the beginning.

The following day, still glowing from the previous day's success, Madonna's students prepared to take the campaign to nearby Mountain View Middle School, where they hoped to recruit eighth graders, as well as the ninth graders at the Freshman Academy housed on the same campus.

Even before they left Bremerton High, students who had been absent the previous day stopped by Madonna's classroom asking if they too could sign up for the program.

"My students and I were looking at each other, saying, ‘This is crazy,'" recalls Madonna.

Later that day, her marketing students arrived at Mountain View Middle School, where they set up their tables and began signing up students. A local television news crew was on hand to cover the event. There was plenty to report: By the end of the school's two-hour lunch period, 543 of the school's roughly 800 eighth and ninth graders had signed up for "Dare Not to Swear!"

In less than 24 hours, more than 1,000 students had pledged to refrain from swearing. Madonna Hanna's advanced fashion marketing students had clearly hit a nerve. 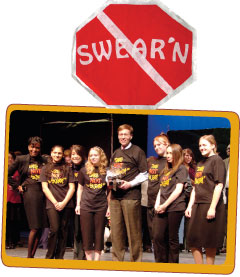 Madonna Hanna and her students with Washington State Attorney General Rob McKenna (center) at a "Dare Not to Swear!" assembly.

With so many people on the bandwagon, the next question was where to take them.

Though Madonna's students had included monthly activities in their one-year plan, they never anticipated that their schoolmates would brainstorm activities of their own. As Madonna describes it, students, staff and local merchants began "driving our vehicle."

Someone suggested a poetry contest. Madonna's students organized it, and in January 2007, 25 students from grades 8-12 entered the first annual "Dare Not to Swear!" poetry contest. Each winner received a $5 gift certificate to The Candy Shoppe in nearby Port Orchard, donated by the store's owner, Sandy Charbonneau.

Letters about the "Dare Not to Swear!" campaign were sent to dignitaries around the country. Several high-profile people responded. First Lady Laura Bush wrote a letter to Bremerton students saying, "Ms. Hanna wrote to me about your campaign and said that thanks to your pledge, polite language is on the rise at Bremerton High School. May your move to better manners sweep the nation!"

Famed Wheel of Fortune letter-turner Vanna White sent an autographed photo of herself, inscribed with the message, "No swearing allowed!"

Washington's Attorney General Rob McKenna accepted an invitation to visit Bremerton High School in March so that he could show his appreciation for the "Dare Not to Swear!" campaign. Candy store owner Sandy Charbonneau offered to make a special flavor of fudge in honor of McKenna's visit and asked Madonna's students to suggest flavors. Rather than select one, Charbonneau decided to make all seven flavors and suggested a schoolwide taste test, with the winning flavor to be presented to McKenna when he arrived. Madonna's students organized the contest, tapping the entrants in the poetry contest to judge the fudge.

The winning flavor — dark chocolate with white chocolate chips, topped with toasted coconut — was presented to the attorney general at an assembly in March 2007, organized by Madonna's students. The assembly included readings of the winning entries from the poetry competition, as well as various skits for which McKenna served as the emcee. The assembly included people from the community — the executive director of the Chamber of Commerce, the presidents of the Bremerton Education Association and the Washington Education Association Council, and supportive local businesses such as Unique Experience and the Kitsap Credit Union — as well as student leadership groups such as the Junior ROTC and the FCCLA (Family, Career and Community Leaders of America), many of whose members had signed up for the campaign.

"It was a very positive and uplifting experience," said Madonna. 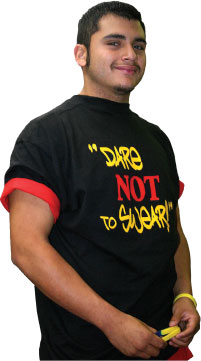 "Dare Not to Swear!" has brought a wealth of activities, experiences and opportunities to the students at Bremerton. But perhaps the greatest reward is what has gone away: the swearing.

"I was walking down the hall and I thought, ‘I'm not hearing kids swear as much,'" said Madonna. "I wondered if it was just me, because the kids used to swear left and right."

A successful policy for students is one that they themselves enthusiastically enforce. Previously when Madonna heard a student swear, she would be the one to deliver the reprimand. Now fellow students swarm around the offending speaker, crying out, "Dare Not to Swear!"

"Those conversations never would've happened before," she said. "This campaign has empowered kids who didn't like swearing but never said anything about it."

One question asked often by repentant swearers is, "What can I say instead?"

In January 2007, Madonna distributed a survey among students, soliciting ideas for substitute swear words. Suggestions included "Fiddlesticks," "Fudge Muffins," "Butternut Squash" and "Golly Gosh!" During his visit, the attorney general provided one of his own — "Tartar Sauce!" — which he and his family use. Madonna provides students with one of these substitute swear words each day during the morning bulletin. Not only do these substitutes provide students with an alternative to swearing, but Madonna has found that their very silliness has helped diffuse potential conflicts through humor.

Has the swearing stopped completely?

"No," said Madonna. "But the awareness has been raised. And for those kids who kick and scream and say, ‘Well, I have my rights,' their peers are asking them, ‘Why would you even want to swear?' That's incredible to me."

The "Dare Not To Swear!" campaign received the Washington Education Association's 2007 Human & Civil Rights Student Involvement Award. It will continue during the 2007-08 school year through a Milken Festival for Youth grant.

"What I find remarkable," said Madonna, "is that the majority of the students want this project to continue. They're actively giving me suggestions as to what they want to happen. They want the program to continue because they don't want it to go back the way it was.

"When you've got a good product, that's what happens."

"Like many other first-year teachers, classroom management was my biggest struggle. Students would yell at me and then I would yell back....I learned quickly that this wasn't going to work. I also learned that students needed structure and routines. Many of the students I taught my first year had home experiences that were nothing like the way I grew up. I couldn't relate. I learned over the years that they just need someone to listen to them. I have completely changed my approach to classroom management and have seen great success in establishing routines and holding students to high expectations each and every day." 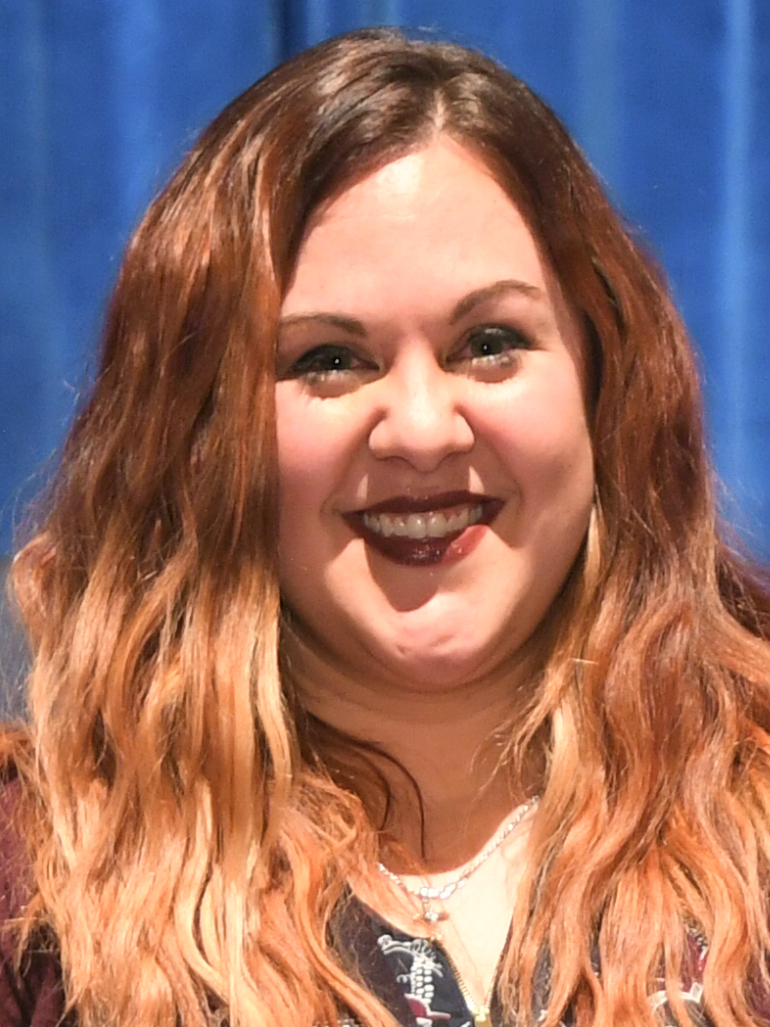