Catching Lightning on a Page

The inner-city streets of Philadelphia can be tough, especially for kids like the ones who attend Grover Washington Jr. Middle School in the culturally diverse area of the city known as Olney. Trying to learn and grow in an environment awash in poverty and violence is a daily challenge for these young people.

As one student wrote, it's a place where "the bedtime stories are bullets / and the sweet sounds are the sirens."

But thanks to eighth-grade literacy teacher Michael P. Galbraith, students at Grover Washington Jr. are learning that the power of the pen is not only mightier than the sword — it can also open pathways to freedom, understanding and opportunity. 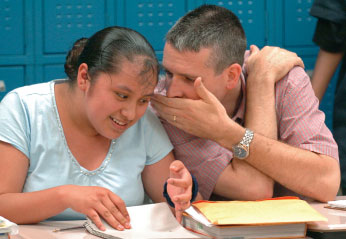 In 1999, she and her students published a book calledThe Freedom Writers Diary: How a Teacher and 150 Teens Used Writing to Change Themselves and the World Around Them. The book was later adapted into a Hollywood movie starring Hilary Swank.

Galbraith was one of the first educators nationwide to work with the Freedom Writers Foundation in developing a similar program for his students. He dubbed his program Writers Matter.

"Having students write from their own experiences provides a comfort zone and a building block for later academic writing," said Galbraith. "We have the opportunity to encourage students to unleash their voices and celebrate with others what they think and feel. We can encourage and help shape these voices to be strong, confident and focused."

In 2004, Erin Gruwell visited Grover Washington Jr. Middle School to speak about her program during a school assembly. It was a day that not only changed the lives of Galbraith's students, but his own as well.

"It was a tipping point in my career," he said.

During the assembly, Gruwell asked how many of the students had a family member who had been shot or killed. Galbraith was stunned to see nearly two-thirds of his students stand and wondered how he could not have known this about them.

After the presentation, he and his students gathered to discuss and "make sense of" what they had heard. Galbraith asked them to write about their lives in the Freedom Writers manner.

"I had never experienced so much excitement among my students," he said. "Their desire and hunger to do something meaningful in their lives was obvious. They brought forth work filled with the most detailed and richest writing I had ever seen such a group produce in my 14 years of teaching."

When it came time for the students to share their writing with the class, however, Galbraith wondered if anyone would volunteer.

"Everyone wanted to read but no one wanted to go first," he said. "Then Brandon stood and dragged himself to the front of the room. I hadn't expected him to volunteer. He usually displays the old head-on-desk posture or the lost daydreamer look. But that day he had a purpose, a mission. He had a forum to speak about something that was hurting him."

As Brandon shared the story of how a dear relative had died of cancer, this "big, handsome kid did the unthinkable," said Galbraith. "He broke down and cried."

But he didn't stop. He kept telling his story, and when he finished reading, the room was hushed.

"The fact that I had a student brave enough to read what he wrote, to evoke such feelings, and to cry in front of his peers... I wasn't prepared for such raw emotion," said Galbraith. "It was a shining moment."

After Brandon's reading, all the students were eager to tell their stories. For two solid hours, one after another described events in their lives they wanted to share with the world.

"It was an eye-opening day for me, as I recognized that lightning in a bottle could be caught," said Galbraith.

He soon purchased a journal for each student and encouraged them to keep writing.

Earlier this year, the National Middle School Association (NMSA) published a book co-authored by Galbraith and university professor Robert Vogel called Voices of Teens: Writers Matter. The book illustrates the significant outcomes — for both individuals and the community — that can be generated through student writing.

The book also includes more than 100 samples from student journals, representing the wide range of subjects and styles explored by Galbraith's students in their writing. Through poetry, prose and, in a couple of instances, artwork, Galbraith's students reveal their observations and experiences, their own stories and those of people around them, their most vulnerable emotions and their highest aspirations. Much of the writing is steeped in pain—the pain of adolescence, inner-city life, family conflicts, peer conflicts—but there is also joy in the writing, as well as love, pride and hope for the future. 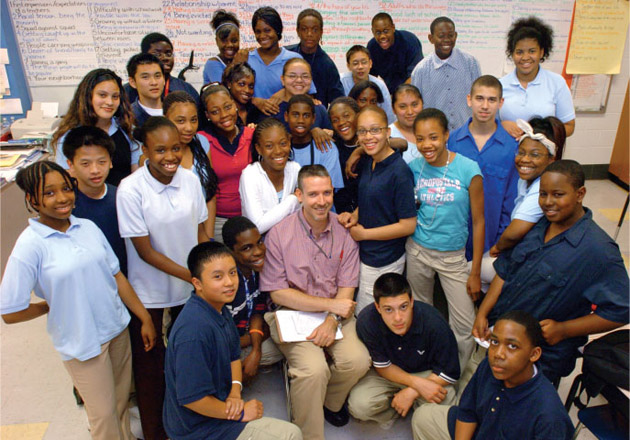 One writer describes his animosity toward an overly critical grandmother ("Yesterday I couldn't take it anymore. I cried. My eyes were red lava"). Another composes a tribute to a loved one slain by an act of violence ("Stabbed in the heart, he dies, I cry. / Stabbed in the heart, no bringing him back, I sigh"). One student's anger-laced rap of defiance ("My words'll have you lying in your deathbed") is followed by another's tender expression of romantic love for an unnamed classmate ("When I saw you sitting there, my heart couldn't stop beating and pounding"). Several pieces describe the pain and anger of being fatherless ("When I become famous and have my own family / Don't you ever come and say you're a father / ... Yet, I will forgive you because I am / MAN ENOUGH!"). Others are declarations of personal strength and resilience ("I am up to meet the challenges I go through, because this is life").

There are also frequent examples of imagination and eloquence in the writing, as in the student whose poem describes what it's like to be treated by peers as "the outcast of the school":

Over and over and over, my spirit has been destroyed by the ignorance.
The unknowable animosity built up inside them.
All I want to do is be their friend or stay out of the way.
I have one question: How many cheeks do I have to turn?

Fundamental to Galbraith's Writers Matter program are multiple levels of sharing. The students share their writings with peers, friends, family, small groups, whole classes and college writing mentors from LaSalle University, where Galbraith also teaches as an adjunct professor in the Graduate Education Department. The partnership with the university gives the college students an opportunity to develop an appreciation for teaching while providing the middle school students with role models who expose them on a regular basis to raised expectations and new possibilities.

The program, which is aligned with the school district's core curriculum and the state standards, has had an impact on his students not only emotionally but academically as well. The results of a pre- and post-test analysis revealed that eighth-grade students who participated in the program improved their writing skills significantly over time, especially in the domains of focus and content. His middle school students' benchmark scores also showed high academic growth, with many moving out of the "below basic" level of achievement. Absenteeism is down and test scores are rising.

"The testing results were amazing," said former principal Michael Rosenberg. "We were the only Philadelphia middle school serving children of poverty that made AYP. Writing led the way for the whole school to be recognized in academic achievement."

As Rosenberg puts it, the students "taught each other many things. But most of all, they taught themselves about what potential and persistence mean for academic achievement and about focusing on a positive future." 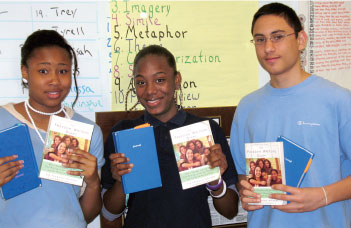 In addition to getting students to write about their own lives, Galbraith has used Writers Matter to open their eyes to the community around them. In partnership with Need in Deed, a local service learning organization founded in 1987, Galbraith's students interviewed families and friends of over 70 children in Philadelphia who were victims of homicide. Some of these stories were featured in an episode of National Public Radio's "Story Corps" program.

"My students recorded the memories, the heartbreak, and the broken dreams of the families left behind and shared them with the world," said Galbraith.

Perhaps the greatest testament to the success and impact of Writers Matter are the words of some of its former participants.

Another former participant, now in the eleventh grade, wrote, "You can fill up pages and pages of things you kept bottled up deep down inside and I think the project let us be free."

That feeling was echoed by another former student, now a high school freshman, who wrote, "I actually felt better after I finished writing something. I'd write about something that was on my mind for a week and I would feel better about it."

"It helped me a lot," wrote another ninth grader who had experienced Writers Matter. "Before I went to Mr. G's class, a lot of times people would get me mad. I would get mad real quick and be ready to fight somebody. Now, instead of taking my anger out on people, I write it down. And when I'm frustrated and have everything on my mind, I just write it down instead of doing the other stuff."

"It helped me focus more and put more attention to my writing," wrote another former student. "It made it meaningful and now I like writing."

I am from barrettes and bows, to weaves and corn rows.
I am from violence to love,
From love to hurt.
From my fifteen-year-old cousin already gave birth.
I am from a Christian church where we clap our hands and stomp our feet.
I am from the new people you meet.
Where I'm from, catching a body may be the only way you can get your respect.
I am from family members and friends getting killed in alleyways and back streets,
Just because they look good.
Those being innocent become fresh meat.
I am from a phrase where my family says, "You can do it if you put your mind to it"
and "It's okay
to be yourself."
I am from a place near you.

No one knows that my sister almost drowned. I love her more than almost anything. I jumped in the pool to save her, but I can't swim. I risked my life, the life I don't care about, to save my sister. I have no love for myself. I know my family says that they love me, but I can't believe them. I don't believe my father loves me. If he did, he would be with me, and not in jail every year. Every time I need him, he's not there.

The pain in my life is not being loved, not believing love. My pain is depression. Ever since my uncle Dennis died, I began to feel this way. He was my life, my world. He was the closest person I had to a real father. He was very sick in the hospital. That's where he left me. I wonder if he fought for his life. Did he know that when he left, my whole world came crashing down?

People think I have a good and nice life, even my mom, but really they don't know me. No one knows me, not even my best friends. No one knows the pain I hide, and this is only the top layer of the pain. I can't tell anyone what hurts me the most. I fear if everyone knew, I would be lost.

“I love the community that I build with students and the families. I try to honor where they are.” — Whitman Elementary teacher wins Milken Educator award, KATU News 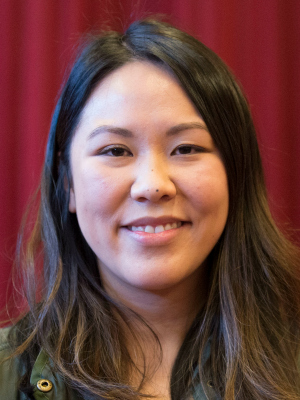