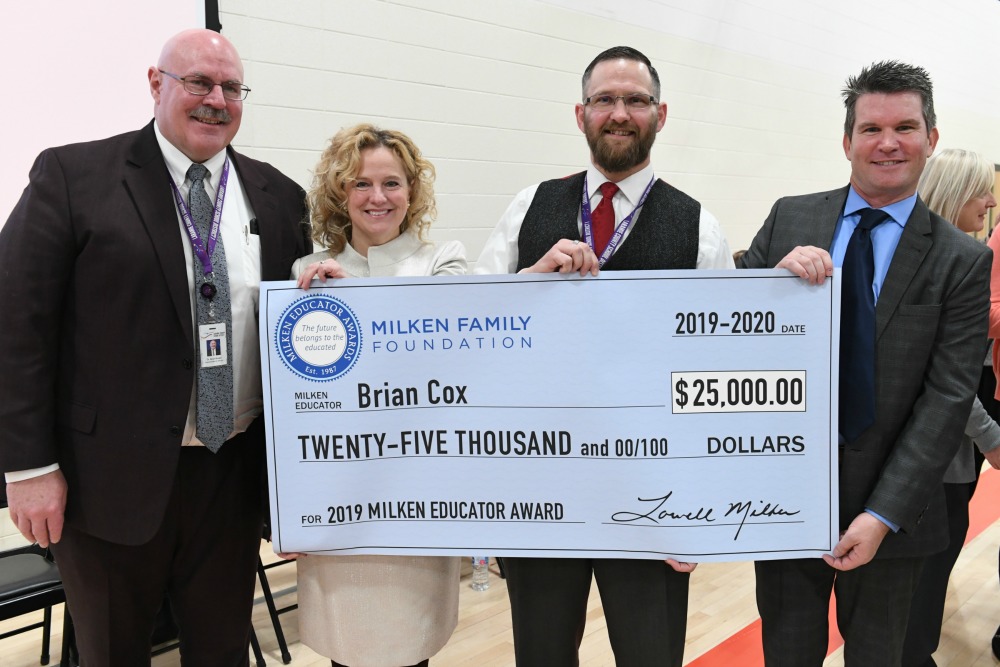 Milken Family Foundation: You worked with your school community to ban cell phones on campus. Why?

Brian Cox (WY ’19): Cell phones, while useful in some situations, become a large distraction for students. We have had this reprieve from cell phones and the distractions they cause for three years now. After looking at data—bullying claims involving social media, fights that were planned and orchestrated, time on task in class, and overall what we were preparing our students for—it became a no-brainer. We began the process by consulting the literature base for articles to share and inform our parents about why we were doing it. We then prepared articles for our parents at varied Lexile levels to ensure that we would reach all our parents.

When we banned cell phones, we saw an immediate jump in our academic scores and student engagement in the classroom. Give a middle school student the choice to engage in the content or be bored doing nothing, and most will choose to engage. We saw an immediate decrease in bullying and fighting. We see students playing tag at lunch instead of reverting to their phones to check Snapchat or engage in typical preteen drama. We still have to coach kids through this process, but it is a unifying front that 99% of staff and parents support.

Brian: I love the fact that this age is when they become who they will be for life. They start making decisions that may not come to completion for many years. We need our strongest teachers and principals in middle school. Content is useful, don’t get me wrong. But teaching developmental behavior and coaching kids through an awkward phase of life requires the best and brightest. How many people do you know who think back to junior high and say, “Man I wish that had lasted longer”? These years are challenging for kids. They need compassion, empathy and grace at higher levels than we think.

Brian: When I first went to college it was simply to try my chance at playing football. I was a whopping 5’10” and 210 pounds and had successfully made it as a walk-on for the University of Wyoming football team. One day at practice I was trying to make a big hit to get the coaches to notice and I dropped my head too low. I fractured my neck and limited my ability to continue to play.

At the time I was an electrical engineering major. Doing well in my courses was not an issue but I truly did not see myself engaging in that work for the rest of my life. I chose it because I knew engineers made money and I needed a college degree to change my stars.

When I was hurt, I thought about dropping out and returning home to Colorado Springs to work at the gas station and McDonald’s where I had worked all through high school. Then I thought back to who, outside of my mother and immediate family, had influenced me to do more than I thought I could. They were my teachers and coaches—specifically Paul Colgate, Mrs. White and Senora Cowan. These three adults helped my single mother craft the person I would become and reinforced to me that continued effort could achieve things that money and talent could not alone. I actually called Coach Colgate, then 73, to thank him for not giving up on me, even though I was not his most talented athlete. 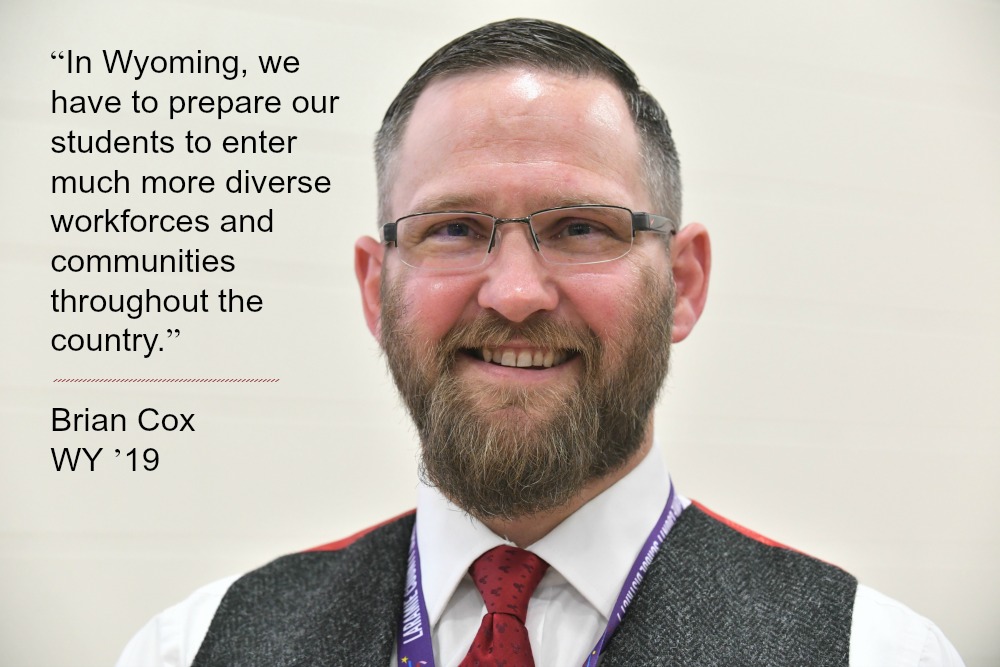 MFF: Who are your role models?

Brian: I didn’t have a father involved in my life growing up, so Coach Paul Colgate unknowingly became a source of influence and drive for me to achieve and better myself. Mike Sibley, assistant principal at Liberty High School in Colorado Springs, mentored me through the first five years of my career; he’s why I became a principal. Once I became a principal, Matt Strannigan, a longtime principal and student advocate at Central High School in Cheyenne, taught me about politics and the game of education, things you never learn from your university coursework. His friendship and advice are second to none.

MFF: What stands out from your first year of teaching?

Brian: Mike Sibley helped me through a lot. As I was leaving Air Academy High School to move to Wyoming I was told by my principal that in year one they wanted to fire me. Year two they thought they still might. By year three they felt good about keeping me on. In years four and five I flourished, working with students and nonprofits as well as coaching and taking on numerous leadership positions, from accreditation to curriculum development. Mike Sibley was the one giving me the coaching feedback to get better—my evaluators had not given me any insight as to the state of affairs.

This is why I am so passionate about mentoring principals and new teachers. I tell them that your first year of teaching, and your student teaching, are two things I would not wish on my worst enemy. The pace is swift and you are usually too afraid to ask for help because if you do administrators may think that they hired the wrong person. Strong mentoring programs for both teachers and principals are essential for people to gain a strong footing and press forward. 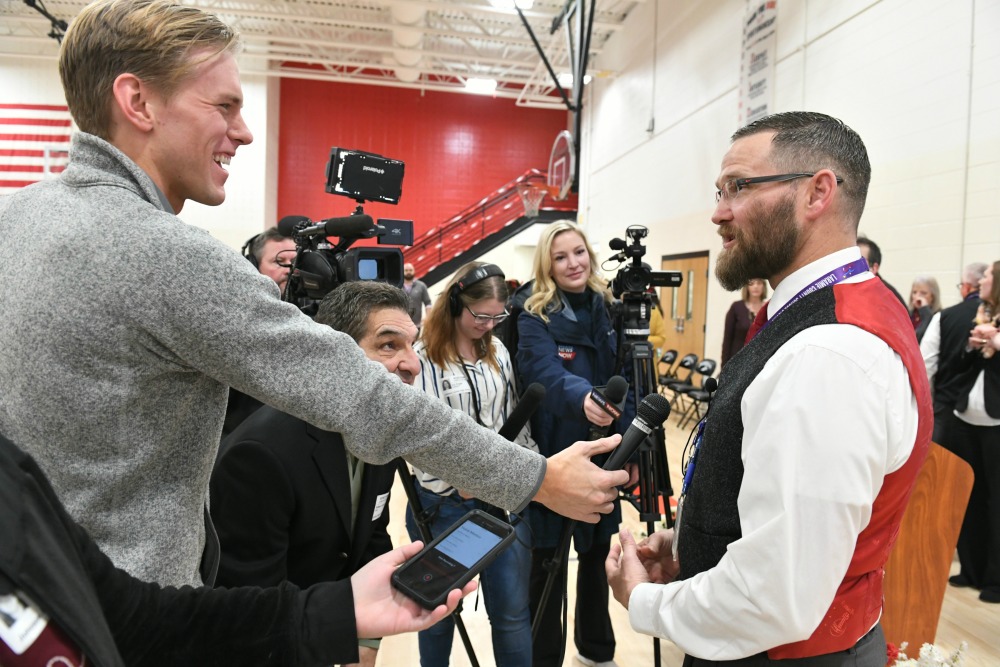 MFF: Tell us about the youth equality symposium you had last summer.

Brian: The Youth Equality Summit was planned as a response to some tragic events at a separate junior high school in my district. Students there had posted homophobic and racist flyers that created community-wide concern. We brought together the school district, the local Air Force base, and several community groups such as the Boys & Girls Clubs and Youth Alternatives.

It is important to note that Wyoming is not too demographically varied. Cheyenne is an emerging diverse community. My junior high represents one of the highest amounts of diversity in our state outside of the reservation schools and Jackson Hole. Unfortunately, as our children grow and come of age, many leave the state for economic opportunities elsewhere. Therefore, we have to prepare our students to enter much more diverse workforces and communities throughout the country. We have to teach them about diversity because many of them do not live it here in Wyoming. Because I grew up in a more urban environment, the district let me help organize this event.

The Summit began with a program from Challenge Day, an organization that focuses on empathy and learning to see things from other perspectives. Students and adults participated side by side in activities that helped everyone build stronger relationships. I believe this is one factor that has led our school to reduce bullying, year after year after year.

Brian: I was in complete shock during the assembly. Surprised doesn’t begin to express the emotion I was feeling. I had been so focused on the all-school assembly, the first in our school’s history. I was very stressed about pulling everything off and putting on a good show for our kids and honored guests.

I don’t think it all set in for several days. Even now as I type this it is very fulfilling to be recognized as a top educator in our country. This is something that never in my life could I have imagined would happen. You simply wake up early and work as hard as you can for as long as you can and then hit the sack and go again tomorrow. 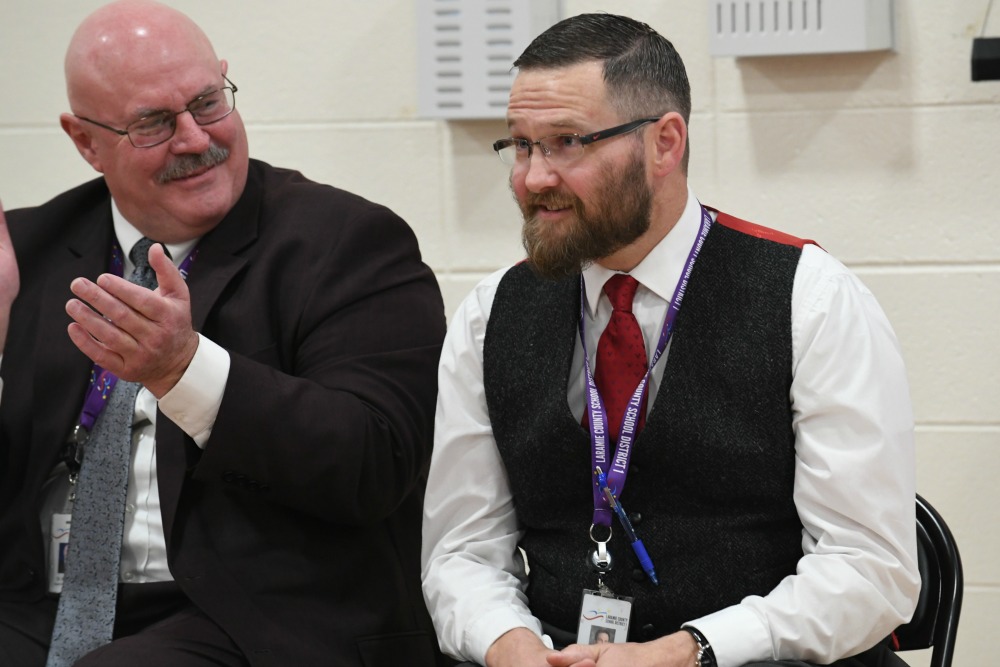 MFF: How did students respond to your Milken Award?

Brian: The students were very happy for me. I received more high fives than usual and also many requests to borrow $10 (ha ha).

I think the big message for my students that has had a lasting impact is that if you continue to work hard people notice. You may not get the day-to-day kudos or reinforcement but over time the extra effort is noticed by many more people than you might have thought.

One of the most humbling things happened when I was reading a thread on Facebook about the Award on which a former student, Alexandra Tannehill, had commented. I had no idea how my class had impacted her, yet she cited me as a prime source for why she became a biology teacher. There is no greater honor than something like this and in education we sometimes forget to thank those who helped us along the way. I appreciated that comment more than words can say.

Brian: I honestly still don’t know for sure. I plan to take my kids to Disney (as cliché as that may sound). I spend a lot of time away from my family, so to be able to take them on a trip to see the ocean and spend time together will be priceless. Outside of this I plan to invest the money back into the very thing that has brought me here: education. A portion will go into a school scholarship fund at my junior high, and the rest into my children’s college education. 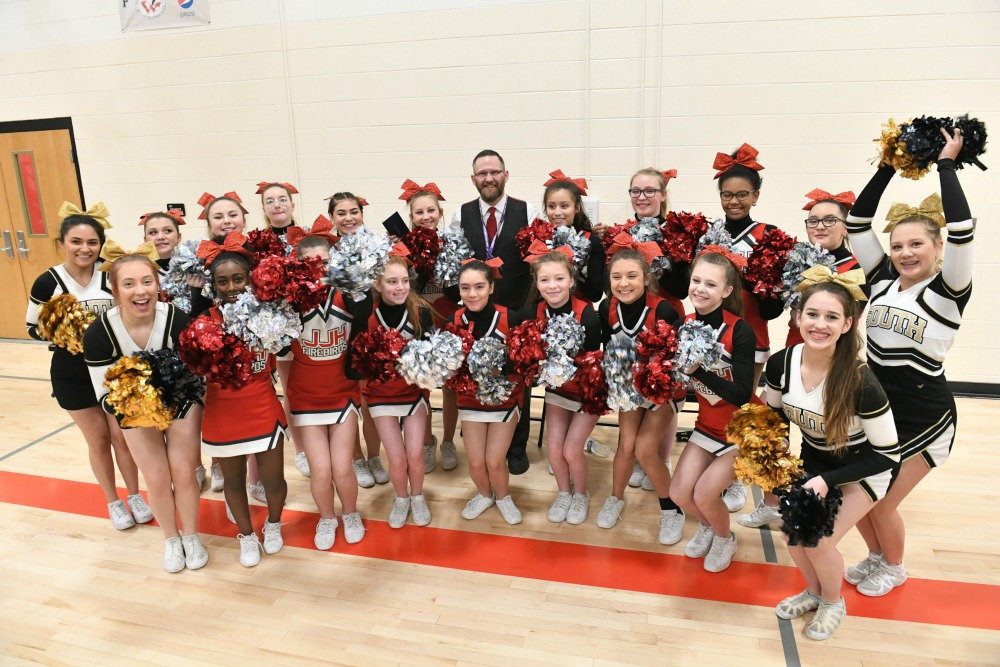 Brian: I define success as putting one foot in front of the other when everything else tells you to quit. I preach a model of relentless forward progress. Having run numerous 100-plus mile ultramarathons, I have learned that life is not about the pace but the completion of goals. You can complete a 100-mile race by simply putting one foot in front of the other, embracing the difficult things that come, and being unwavering in your pursuit of more than you think you can do.

MFF: What do you hope your students remember from their time with you?

Brian: That hard work and diligence will take you further than any level of ability. There is nothing more powerful in this world than a person willing to rise. Life will inevitably punch each of us in the gut. It may look different for each of us, but having the skill set to pick yourself up and take one more step places us in a position to complete the race. I often joke that I may not be the smartest person in the room, but I guarantee that I am willing to outwork anyone toeing the line next to me. This skill is what will drive them.

"It makes me so happy to think about my past students who have gone on to be wonderful adults and make positive contributions in their community. It’s an amazing feeling to know that as an educator, I had a small role in their progress. If you give your students the best of you and share the passion that you feel for your subject, then it will be contagious....They inspire me every day to be my best and look to the future." 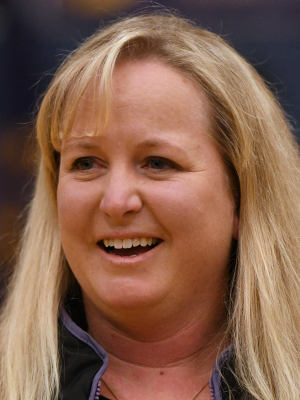