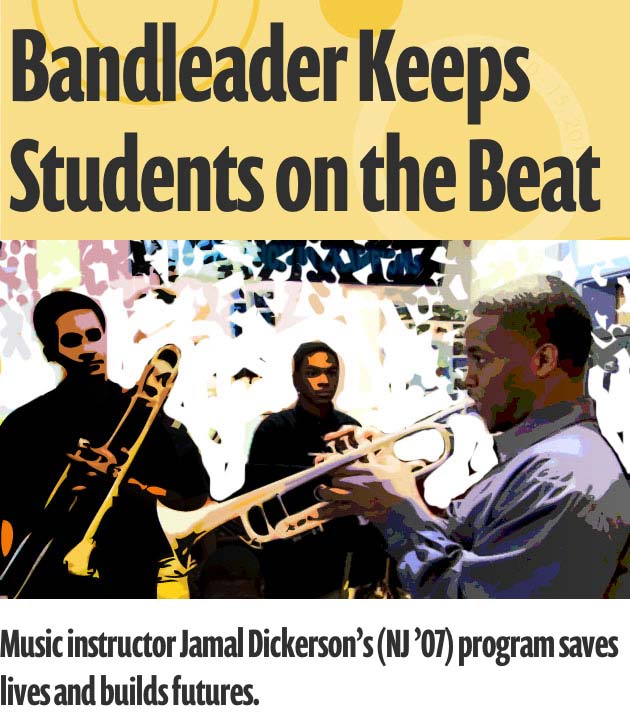 There's a constant ringing in Jamal Dickerson's (NJ '07) ears and he wouldn't have it any other way. As the instrumental teacher and band director for Creative Arts High School, it's his job to mentor and educate teens from the struggling city of Camden, N.J. on the wonders of music, specifically jazz. While this is also Dickerson's favorite music genre (he's played the trumpet since second grade and studied with musicians like Leon Mitchell and Colin Knight, Cab Calloway's original trumpeter), he's found that it's the easiest one to teach given his resources. "In the school we were stuck with jazz instruments," he says, so he decided to use what he had. "[Plus,] my students don't study privately and it's tougher to start an orchestra if you don't have students who study privately because they need individual personalized training." The program is about showing students the world, both literally and metaphorically. Each year, Dickerson — or Mr. D, as his students call him — takes his high schoolers to music competitions across the country and opens their minds to career options beyond what they see in Camden, a town so deserted economically that it doesn't even have a shopping mall or a movie theater. He shows them that there is another way out besides the option most often suggested: sports.

"This is an arguable concept, but I believe that in our community, the kids who are into sports aren't necessarily developing those chief fundamental concepts needed in order to be successful human beings: discipline, self-esteem, that ability to work hard, the ability to take talent and hard work to equal into genius." Dickerson recognizes that music is a talent that not everyone possesses and that not everyone can make a living doing full time. He tells his students to "use this program to get you from thinking you're worth nothing to at least being a college student."

Click through this gallery to see Jamal Dickerson and students

Still, Dickerson knows that he only has a few years to make an impact on his students. In order to truly make a difference, he believes the best bet is to get them while they're young and keep an eye on them throughout the years to make sure they graduate from high school. Along with his brother Nasir, who teaches middle school music, and his friend Hassan Sabree, who teaches music at the elementary school, Dickerson uses a formula that they like to call "vertical alignment" or "vertical articulation." The idea is simple: One reports to the other about the child and his or her progress and the child advances through the education system. Not only does this method keep teachers informed on a child's development and family history, it also helps the child know that every school will have at least one teacher who cares for him or her. "More than us being teachers, we're being coaches in that we're finding opportunities possible to provide mentoring," Dickerson said. "We're taking them from the concept to the careers." 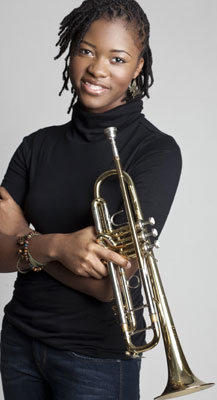 Jamal Dickerson (NJ '07) doesn't measure success through his bank account or personal fame — he measures it through his students. With Arnetta Johnson, he's accomplished his goal. Nicknamed the Trumpet Chick, the teen has the poise of a princess — until she lets loose on her trumpet. She's played with Grammy Award winner Esperanza Spalding and her awards include Outstanding High School Big Band Soloist Award at the 2012 Monterey Jazz Festival's Next Generation Jazz Festival and Superior Musicianship at the 2012 Berklee High School Jazz Festival.

Dickerson doesn't eschew his responsibilities out of the classroom either. A father of six who grew up in town and married his high school sweetheart, Dickerson knows that he and his wife are role models in the community and their actions have strong impacts. They're both active in Unity Community Center, a program started by Dickerson's father. During his precious free time, Dickerson can be seen teaching martial arts at the Center. He's also the chief choreographer for the Center's Universal African Dance & Drum Ensemble. "Not only do I relate to my students, but I become a living example of the possibilities for them," Dickerson said. "There are so many examples to the contrary. They have so many drug dealers, and so many deadbeat fathers. To be able to see one father with the mother of his children, it says to them, OK there's some hope."

Not surprisingly, Dickerson won't let students' situations hold them back. When Rashad Boyd, one of his students, told him that his mother was urging him to become a Certified Nurses' Assistant (or CNA, think retirement home staff) after graduation because it was a guaranteed job, Dickerson pushed harder. "You need to go for the gusto," he told Rashad. "You need to do what you love to be doing whether you're paid or not for it. Don't let money make decisions. That's why [rich people] are wealthy; it's something they would do whether they're paid or not and then they figure out how they can get paid for doing it." Rashad will be attending Texas Southern University this fall.

Jamal Dickerson (NJ '07) is the band director at Creative Arts High School in Camden, NJ. Find out more about him, watch his MEA videos and contact him on Jamal's profile page.

"I know I'm succeeding as an educator when I see my students take risks without fear of making mistakes. That's when I know they feel safe, loved and supported, and they know I'll always be in their corner." — Spotlight interview 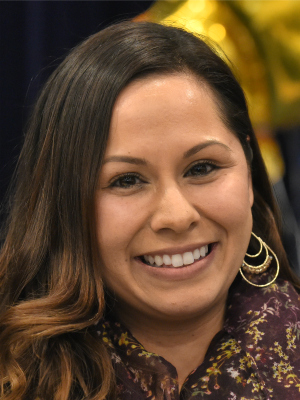