What is a Leader?

Chairman and Co-Founder of the Milken Family Foundation Lowell Milken asks a bright volunteer at Clover Avenue Elementary, "Who are the leaders in your school who guide you toward success every day?" Without a moment's hesitation, came the answer: "Our teachers!"

Happy 2013, Educators and Champions of Knowledge!

We hope your year has started off ambitiously and full of promise.  We have great plans for this year, which we look forward to sharing with you throughout the coming months and hope you’ll do the same.  In the meantime, we started off the year with what we love to do most: changing teachers’ lives and inspiring future leaders.

On Friday, January 18th, Chairman and Co-Founder of the Milken Family Foundation Lowell Milken came to Clover Avenue Elementary School in Los Angeles to personally surprise an unsuspecting teacher with a Milken Educator Award.  In a standing-room-only assembly with enough news crews to give new depth to Teacher Magazine’s moniker of the Awards as the “Oscars of Teaching,” leaders in the field of education gathered to honor one soon-to-be-surprised educator and teach the students in the room—as well as anyone who caught the news later that day—about who the most important leaders are today, and their role in shaping the leaders of tomorrow. 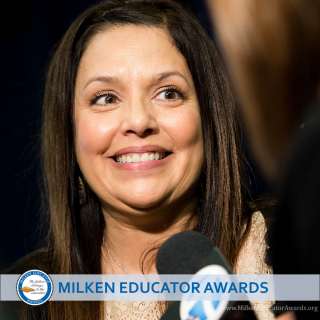 Introduced by CA Superintendent of Public Instruction Tom Torlakson and LAUSD Superintendent Dr. John Deasy, Lowell (who has relished personally notifying educators since he conceived of the program more than 25 years ago) skillfully recruited volunteers to help build the excitement before he announced Jackie Bonilla as the 2012–13 Milken Educator for California.  See the highlights and share the excitement in the video.

After the presentation and personal congratulations from the 11 veteran Milken Educators in attendance, the Milken Educator Awards team got to visit Jackie’s classroom and witness firsthand how she nurtures the future leaders in her charge.  One by one, representing more than 10 countries with parents from five continents, each of Jackie’s students—some who have only been in the U.S. for as little as a year and a half—enthusiastically recited in front of their classmates and 20 curious grownups a portion of Dr. Martin Luther King, Jr.’s I Have a Dream.

Of course, you can see all of the amazing moments captured by our talented photographer on our Facebook page. 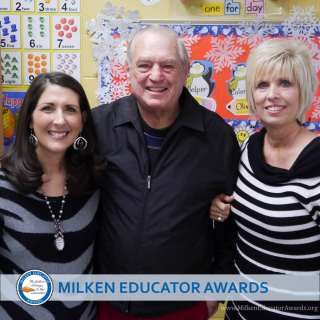 This Thursday (January 24), Senior Vice President of Milken Educator Awards Dr. Jane Foley resumed her regular notifications duties when she traveled to Barboursville, West Virginia to surprise Whitney Stead. Evidently, leadership runs in Whitney’s DNA.  She was inspired to become a teacher by her own kindergarten teacher, who also happens to be her mother.  These days, Whitney and her mom both teach kindergarten at the Village of Barboursville Elementary School.  The pedagogical pedigree doesn’t end there though.  The leadership genes go back at least as far as Whitney’s grandfather, who fought in World War II before becoming a teacher himself.  Clearly this is a family that knows something about inspiring future leaders, and with the help and platform of the Milken Educator Award, we know they’ll be able to impact even more young minds.  Watch Whitney’s genuine disbelief when she hears Jane announce her name; at least 708 others have already enjoyed it.  We bet you will, too.

It’s still difficult to think about Connecticut elementary schools without feeling a pang of sadness and concern for the young students shocked by the tragedy in December.  Any reason for celebration there is most welcomed, to be sure.  Even more so, a celebration in honor of an amazing elementary school teacher may just be what the doctor ordered.  Dr. Jane Foley, that is. 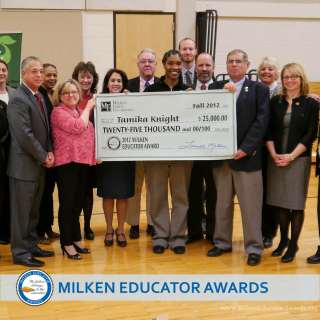 Early this morning, Jane and the MEA surprise notification team arrived at Annie Fisher STEM Magnet School in Hartford, where they were met by 14 other Milken Educators, several members of the board of education, Mayor Pedro E. Segarra, District Superintendent Dr. Christina M. Kishimoto and State Commissioner of Education Stefan Pryor.  The teacher they were there to honor takes her leadership role as a calling that she answers at all hours and well beyond the classroom.  Like many Milken Educators, Tamika Knight tutors after school and mentors student teachers. Having been a promising basketball player herself, she also coaches girls and boys basketball teams at the local Boys and Girls Club.  That may explain why the entire auditorium burst into cheers (note the people literally jumping with excitement) when Jane called her name.

Great educators seize every opportunity to teach. Grateful for today’s attention, Tamika realized the value of the moment to do just that as she spoke to a reporter:

“In my class, students learn to read and learn how to be a good person.  I teach them lessons and tell them you never know who is watching, so you should always demonstrate good character, respect for others and give back.  The best part of this moment today is that my students will now understand what I have been teaching them.”

That’s leadership by example exemplified and we at the Milken Family Foundation were proud to play a role.

Please join us in welcoming these three new leaders to your ranks.  We look forward to watching them rise to new heights from which they can inspire even more young and future leaders for years to come.

P.S. — Jackie’s notification was the first that I’ve had the joy to attend.  Being part of the celebration and meeting the students that Milken Educators impact was an experience that brought me to new levels of appreciation for all you do.